The Old In and Out Odyssey 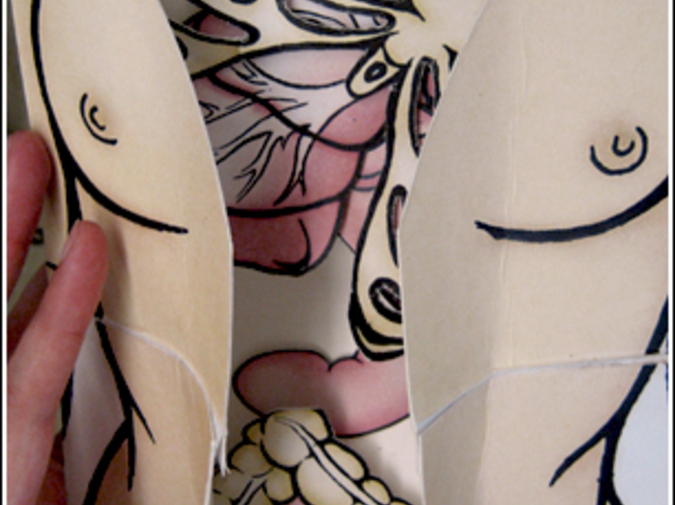 There was no place to get it on.


There are bulky strange men in the kitchen, they are laying new black and white tile. It is daylight out, so that limits the possibilities. The proximity of the bathroom to the kitchen in our tiny apartment leaves that option out. Though later we'd talk about how we just should've done it right there in the studio apartment, right on the bed within ear and eyeshot.

We drive around and around stopping every once in awhile for some making out and light base work. This only makes matters more desperate, however. We are a hot bed of coals ready to cook some pink meat bloodless.

The idea of one of those roadside places by the hour is not without its appeal, but we are too poor to rent from even the cheapest fleabag.

We put our two minds together. Traveling to my work, we salivate at the notion of my cubicle walls rattling and shaking – knocking down all of Andy Reddecker's stupid '80's looking The Babes of Sailboats pictures on the other side of my wall, creating a uniquely satisfying climax. We smooth some mint lip stuff on our lips. We get there and Reddecker's working on the weekend. Such a brown-noser. We sneak out unnoticed.

We think about going to my man's place of employment, but he's already on the verge of getting 86'd.

The Hospital: staph infection. Grocery store: fluorescent lighting. Airport: too far, and we are uncertain if there are bathrooms before security check points. Farrell's Ice Cream Parlor: no longer exists.

Josh and Heather might be home. But, how do we knock on a friend's door, carry on a bit of polite conversation and then ask if we might retire to their guest bedroom to please get it on? We cannot do that. Josh and Heather are nice, they might even let us, but somehow even on the sixth drive by, we are unable to muster the courage.

How about Lilly and The Beast? Well, Lilly will tell everyone and the details will be misconstrued in such a way that she will end up the most put upon person ever. The Beast is awesome, likely home alone stoned out of his pants – he'd chalk up this unwholesome drive of ours as hilarious. They are one of those couples where you only want to hang out with The Beast, but Lilly would never allow that. You can, if you enjoy an afternoon of passive aggressive torture, spend time with just Lilly – but no one ever wants to do that.

We laugh a little at the thought of parking in a dark corner of some Safeway parking lot. Picturing a passerby watching one or the other of our white asses up in the air. The passerby, at first thinking there is an unwrapped turkey being tossed about, before zeroing in on the bucking nakedness.

It has been an hour now since the initial heat. Maybe the workmen are done. Cruising our apartment building we can see one of the men lumbering about smoking a cigarette and drinking our beer. Shit.

The drive for mutual enrapture is nigh. Who else? Who of our friends might be into participating? At this point, we might not even care if they watch.

What about Kim and William? If we go to their apartment and they are home they'd actually have to leave their own place. Still it's getting to the point where that kind of abrupt rudeness seems OK. Like, "Ding dong – listen here is ten dollars for coffee, we'll change the sheets, see in forty-five minutes. Bye."

There is rock star parking in front of Kim and William's brick building. Looks like our luck is changing. Hopping out of the car we race to ring the buzzer.

Nothing. No answer. Really? Can this possibly be happening? Hold on; hold on, we think... maybe their first floor apartment window is open or unlocked. We can break in. We know we can. We bet there is an open window because they have two fat cats named Fred and Ginger. Fat cats need to go outside. Especially cats with stupid names like that. They'd need to get out and beat the shit out of some other cats just to feel good about themselves.

We round the back of the building. Not good with direction, we are unable to pinpoint the side or corner of the building where their apartment is located. So, we are forced to peer in all the windows with our hands over our brow to cut out the light.

We squint into a very young pudgy couples bedroom window. They are totally going at each other with numbing velocity. They are listening to a really good pop song that we like but can never remember the name of, or even the band that sings it. A German Shepard is barking to their rhythm. They are entangling in a searing and deft way that shames us.

That original flicker is now a genital inferno. We search around behind us, there is not enough tree coverage for us to slip'n'slide next to the building, in addition there seems to be a significant and fairly disturbing number of squirrels scampering about. Their aggressive temperament leads us to believe they'd make trouble for a couple rolling on the ground in the out-of-doors.

Finally, we get to a window where we recognize the black and green geometric pattern of the duvet cover on Kim and Williams bed. We pop the screen off of the window with the butt end of our tweezers. We are sort of obsessive about our eyebrows.

With our palms pressed hard against the window we are able to slide it aside. Fred and Ginger leap out of nowhere, Ginger catches my cheek with a couple of her front claws and now I am bleeding, but we are still determined. The fat cats disappear 'neath the brush.

Darting around looking at each other with stretched necks in a hyper alert manner – the squirrels appear as though they are signaling one other in regards to an impromptu feast.

We help each other inside. Our hands are raw from the metal-grooved window ledge, a bruise is rising on my shin and there's a tear in my skirt. We do not care. We are in.

For a moment we stand face to face breathing hard, staring in that way where you're pretty sure you are about to get every piece of candy in the store.

We sneak around the creaky hardwoods to make sure Kim and William aren't there. We are alone. We get the idea to pull the chain lock so there are no surprises. We help ourselves to some water and oranges, for energy. We rub natural toothpaste on our teeth.

Then we run to the bed pulling off anything covering our busy parts. Though we have waited a long time, we don't want it to be over too quickly. We say stuff about how big and viscous things are. We like to talk about the elevated temperature of the other person, how they make us feel a certain elevated temperature as well. We like to get our hands really involved in all that is going on to the point where we are unaware of exactly to what those hands are attached. The sounds that we make resonate like a distant cry of animals gorging on a recent kill. We flip me on top and in reverse. Now, I am looking out the window of Kim and William's apartment and Kim and William are looking back at me.

Each one of them is holding a cat. They are smiling.

That's when you know you have good friends.

Frayn Masters writing can be found in the anthology Mountain Man Dance Moves: The McSweeney's Book of Lists, and she is a member of the rapid-fire group Haiku Inferno which released a naughty little self-titled book through Crack Press in '07. Some other places some of her work is located: Northwest Edge III: The End of Reality, Spork Magazine, and Little Engines.