The Man Who Painted Night 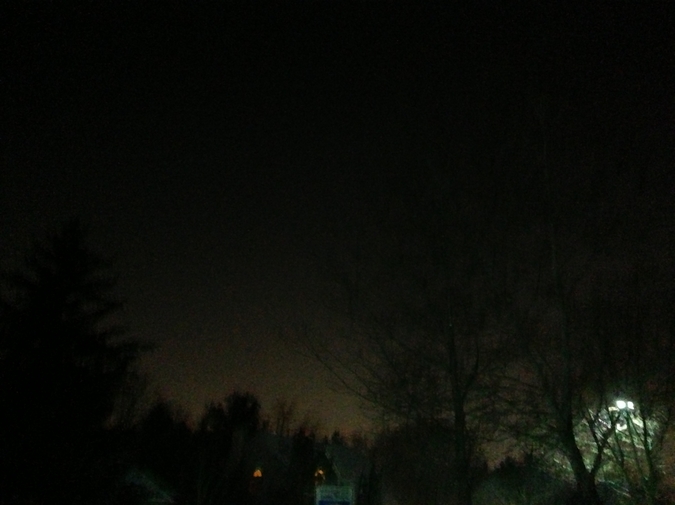 It was a difficult job for the man who painted night.  First off, he always stained his clothes.  An occupational hazard, and Frank supposed he could wear an apron, but when he arched his back, stretching as high as he could, droplets of paint dappled his pants and his shoes. The apron wouldn’t help anyway. Sometimes it even landed in his hair, thick clods of paint that took a good dousing of turpentine to get out. Frank wasn’t a tall man, but he had long arms, and sometimes when he couldn’t reach, he’d hook his legs into the rungs of the ladder, and he’d swing back like he was a trapeze artist, and he’d aim his brush for the corners of the sky.  And when he was there, suspended from his ladder, upside down so the sky looked like the ground, he felt most himself, most at ease, a man who wanted for nothing but his canvas and his brush.

But there was Cynthia, and he wanted her, too.  She was the woman who painted dusk, and every night, as she climbed down the ladder, Frank stood at the bottom, awaiting his shift.  He’d pretend to look upward, examining the canvas before him, the way her brushstrokes lilted up so the sky looked backlit.  He’d watch her descending the ladder, notice her hands stained with blues and grays and whites, like she’d blended the colors with her fingers, not her brush.  When she’d reach the bottom rung, she’d linger, looking up at the sky with Frank. They always shared that moment, their heads pulled back, their necks strained, their bodies so close they could feel each other’s heat.  He’d glance up toward her.  Her eyes were gleaming, full of wonder and sadness, and he wished he could say something, anything, but his voice would hide from him in these moments.

If only he could tell her he didn’t want to paint night.  Well, he did.  He loved painting.  Loved the freedom of it.  Loved the way the paintbrush felt as he rolled it in his fingers, dabbing the sky with stars.  But he wished there were a way he could paint night without destroying dusk. Because with every swing of his arm, with every swath of black that covered her beautiful light gray sky, he felt a little further from her.  Up there, up on the ladder so close to her work, he could see parts of her that nobody else could.  He could see where her brushstroke started and stopped.  He could see dollops of paint that came to stiff peaks, like little waves frozen mid-crest.  He could see she painted with short, swift movements, not the steady side-to-side strokes that Frank had learned in school.  There was a loneliness in her sky, and Frank could feel that, too.

Nobody waited for him at the bottom of the ladder when he was done with his shift.  The guy who painted sunrise wasn’t due for several hours, so Frank would take his time gathering his buckets and pans and brushes.  After he folded up the last of his tarps, sometimes he’d linger.  He’d lie on his back, make a blanket of the grass, and stare up at his work, the vastness of it.  His moon was fat and low, his favorite version, because people noticed it.  They’d look out their windows. Look how beautiful the sky is tonight, how wide the moon, they’d say, and they’d point and they’d make wishes and they’d pretend to see a face in it.  Frank was not a proud man, but he knew nobody could paint the night sky like he could.  He understood the inky darkness, how it hid some things, how it illuminated others, how it hung quietly, patiently, like a word waiting to be spoken.

Frank wondered if Cynthia noticed the moon tonight. Maybe she could convince herself it was real.  It was real.  She must know that.  He thought of how she paused at the bottom rung of the ladder, of how her neck curved as she looked up. Frank had never seen anything so lovely.  He closed his eyes and imagined taking her paint-stained hand, delicate as a little bird, and together they’d climb, up, up, up.  They’d climb until they reached the top, and they’d hook their legs into the ladder, and they’d swing backwards, hanging upside down.  It’d be just the two of them, and it’d be quiet so high up, and he’d say, Look how small the world looks from here.  How far away. How beautiful, too.

Sarah Domet is author of 90 Days to Your Novel.  Her recent fiction and nonfiction has appeared in Bluestem, Juked, Barely South Review, Beloit Fiction Journal, New Delta Review, Talking Writing, and other places. She lives in Statesboro, Georgia and teaches writing at Georgia Southern University.