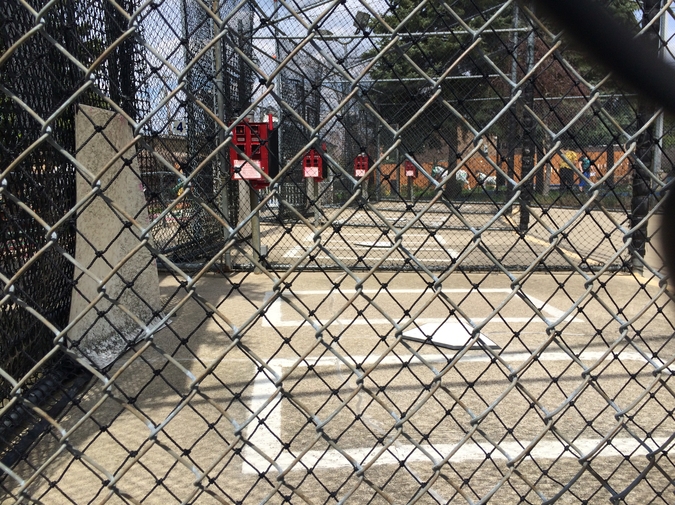 Junior is not getting out of his car.

It’s January in Ohio, and he has just driven all night from Florida. This car—a 1991 Nissan 300ZX—is a beautiful ride, a rich deep cherry color, the colors of the Cincinnati Reds, his father’s old team. It’s what he wants his father to see when he walks out of the Talbot Halfway House and lays eyes on his first born for the first time in six months.

He took quite a risk driving up here. Last year, at age twenty, he had played single-A ball for the Orioles affiliate down in the Carolinas. But with his .232 batting average, the Orioles cut him loose, and he has spent all offseason in Florida working out, but still his father’s son: hammering beers in the evening, chasing those pretty college girls whose skin was so pale from the winters up north. Junior was feeling good about his prospects; he has just signed a deal with the White Sox single A affiliate. Still. .232. Last season’s batting average ached in his side like a broken rib.

His father pulls the front door open and closed, and from the steps, grins down at him. He’s dressed in a lightweight jacket and long pants, needs a haircut, but he’s still compact and athletic, moves like a bull. He hurries down the steps and climbs into the car.

“Where’d you get this ride?” Pops asks.

“Star has to be picked up in style,” Junior replies. Pops laughs, smacks his arm. Junior peels off the curb and heads north.

Immediately, Pops gets quiet. The roar of the engine drowns out Junior’s thoughts, and he glances over at his father. It hasn’t been that long since he’s seen him, and they spoke by phone once a week, but Pops seems permanently changed in a way Junior can’t entirely identify. Older isn’t the right word, but maybe diminished. They hadn’t actually talked about what they were going to do today. It’s too early in the morning for a beer with his dad, who probably isn’t allowed to drink anyway, and he isn’t hungry. A girl? Seemed a little odd to think of it, his father’s needs and all that, but his single A manager used to bang chicks in the his office when he thought his ballplayers weren’t around. Pops has his right elbow on the door, hand over his mouth, in concentration like he was still managing the Reds. Junior has seen that look many times over the last two decades. And he suddenly knows exactly what his father needs.

He hops off at the next exit and turns right, then begins to zip his way through back streets and roads, the engine roaring under their feet. Junior darts and weaves through traffic, racing through red lights. He pulls a hard turn into the Queen City Sportsplex.

“What are we doing here?” Pops asks.

“You’ll see. C’mon.” They climb out of the car and walk through the entrance like sultans. The kid at the front desk, glasses and bored expression, glances up, and his eyes widen when he sees Pete Rose Jr. and his father, fresh out of a halfway house, standing before him.

There are seven indoor batting cages. On the left, up the narrow walkway, are rows of aluminum bats, all of them with handles wrapped with tape that has turned gray from use. To the right is the counter where hitters change in dollars for tokens and get forced to wear a batting helmet. Junior digs in his pocket and pulls out a fistful of dollars.

“No way, man,” the kid behind the counter says. He pushes over a handful of tokens. “Your dad doesn’t have to pay.”

Junior turns. A small group of people have surrounded his father, who is smiling and signing autographs. Pete, Pete, Pete: they sound like chickens begging for feed. His father, somehow shrunken in the car, now seemed taller, happier, and his twitching hands were now filled with scraps of paper and a ballpoint pen. The number .232 ran through his head like a brushback pitch.

His father’s eyes lock on the token as he pushes his fresh autograph blindly back to a kid, walks over to Junior, and plucks the token out of his hand. He strides to the fast pitch cage. The posted MPH was 90.

“Maybe he’s been practicing in prison,” another replied.

Born in 1941, Junior thought. Kid probably had that memorized. What the kid didn’t know, because he was thirteen years old, was the way the body could break down. The way that just one week on the beach can throw off your timing. Hell, Junior was only twenty one years old, and he knew that. He played ball with guys in their thirties, still hanging on, still chasing the dream, and they had to change everything about their life—no more girls, no more whiskey—just for the chance to stay on the team.

No one can step into a cage at fifty, after eating prison food for six months, and hit a 90 mile per hour fastball.

His father slides the token in the machine. He isn’t wearing batting gloves or a helmet. His father saunters into the batters box, adjusts his crotch, taps the head of the aluminum bat against the faded yellow plate painted on the concrete. He crouches, left handed, into that famous stance, and the kids all murmur with delight.

The warning light on the batting cage comes on. His father does not move. A ball falls into the mechanical arm, catching at the end, and it whips forward, firing a ball through the small hole in the netting. Junior holds his breath. The pitch zips low and outside.

His father remains compact. He pulls his arms forward, his left arm maintaining a powerful V shape got him 4,256 major league hits. All his power moves in synchronicity—hips, chest, arms, shoulders, hands—his lead arm holding a fixed angle, still bent, refuse to come out, and the barrel rips straight and true over the plate.

Pete Rose smashes the ball straight over the batting cage, a line drive that would have been a double in any major league park. He steps back, lifts the bat over his head, and slams it on the concrete. He bellows, “I still fucking got it!” And Junior and all the kids punch their fists in the air and roar.

Michael Nye's debut story collection is Strategies Against Extinction, available from Queen's Ferry Press. His writing has appeared in Boulevard, Cincinnati Review, Crab Orchard Review, Epoch, and Kenyon Review, among many others. He is the managing editor of the Missouri Review.