The Haunt of Santa Fe 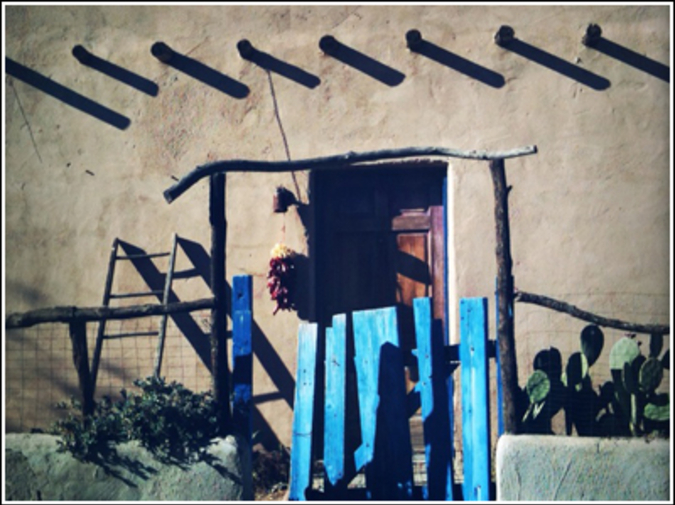 She had lost something, but she was not sure what. She stepped out of the car at a gas station somewhere outside of Santa Fe. She wore yellowed bruises and a dirty white tank top. The air was hot, playing tricks on her. There’s nothing for miles but desert, and when she raised her hand to her eyes to look out over it, she swore she saw a virgin climbing out of a crack in parched earth, her white dress so bright it burns the eyes.

Mary, a mirage. In the middle of nothing.

She kept her motel room empty. No point in making it comfortable. There were no signs of life except for all her mistakes on display in the garbage can. A crushed pack of Marlboros. A crumpled chip bag from the ancient vending machine in the lobby. Sanitary napkins soaked with blood. Wrappers from gas station aspirin. An empty whiskey bottle.

Each night, she removed the comforter, folding it and placing it on the chair in the corner. She slept on top of the sheets, straightening them every morning, placing the comforter back in its rightful spot.

She checked her wallet, flipped through the bills. Forty-seven dollars. Forty-seven dollars to get from Santa Fe to California. She wasn’t going to make it, gas prices what they were, and a girl has to eat. Not that she’d been eating much. The heat left her with little appetite and heavy fatigue as permanent as the sweat slick on her brow. She’d been living off vending machine food and all the free water she could find. From bathroom taps, rest stops. Could you get dysentery in America? She thought you probably could.

When her stomach had been in agony, gnawing on itself for hours, she’d give in, hear the soft hiss as she popped open the plastic wrapper from her vending machine meal. Always after the first few bites, she’d feel sick. She would wipe her greasy, crumb-flecked fingers and throw the rest away.

She had no phone, had tossed it somewhere between Oklahoma and Texas. It wouldn’t stop ringing, even when she didn’t answer, which was always. It beeped at her incessantly, voicemail after blinking voicemail.

The early messages were almost tender.

Later, his tone changed. She knew it would.

Still she didn’t answer. And late at night when she would lay sweating in her underwear across sticky yellow hotel sheets, it rang again.

You are such a drama queen You and your fucking games You wanna win? Okay You win Just answer the fucking phone.

She cradled the bottle of Old Dan Tucker in her left arm, held it tight against her side. She took a deep sip. It was alive inside her, breathing fire in her throat, a camp of coals in her belly. The recorded words started softly. His barely-audible staccato became louder, the sound mounting into a furious crescendo, striking blows at the base of her brain.

You stupid fucking cunt You fucking bitch How dare you Answer this fucking phone or I’ll beat the shit out of you.

Each night she wondered if she had left clues behind. An innocuous scrawl on the tablet by the phone. A subconscious scribble on a paper scrap that had fallen from her pocket. Always something.

He had something at stake. The baby. His baby.

The baby she cut out of her before leaving.

At the clinic, the doctor had administered a sedative. She wondered if it was protocol, if women were supposed to be put under for the procedure. But she didn’t care, really. She was anxious for it to be over, to get to the end. Where she could walk out the door and turn right instead of left. Drive south instead of north.

Take one of these pills every 12 hours, the doctor said. Drink lots of water. Get lots of rest. It’s normal to have some bleeding. Use these. He handed her a pack of sanitary napkins. Do you have someone to pick you up? Is there anyone we can call?

She shook her head.

Father forgive me I have sinned.

She wanted to stop listening to the messages, but she couldn’t. Each time she pressed the cool, dry plastic to her ear she felt shot through with panic, her stomach twisting with cramp and her mouth dry. She licked her dried lips, tried to ease her breathing into some normal pattern while she held the ticking bomb against her head. This would be it, she thought.This would be the time. This would be the time he found her. She was waiting for the final phone call to come, then. The endgame.

I found you, you cunt. I found you and I’m outside and if you don’t get your ass out here this second, you’ll fucking regret it.

These were things he would say. He would make her pay more this time than other times, accrued interest, a penalty for leaving him, for making him look like a fool. For letting the bruises fade from purple to yellow. Every time she began drifting into a dazed, uneasy sleep, she imagined she heard someone pounding on the hotel door, yelling. Screaming at her toOPEN THE FUCK UP.

Every night she locked the door and moved the motel furniture in front of it. Still, the thought of falling asleep in a dark room terrorized her. The shadows of feet beneath the door. The shaky whir of her own breath an unnatural mechanical noise, like some piece of hospital machinery.

Her eyes popped open at every sound. The metallic click of a key fitting into a lock a few doors down. The crunch of tires in the gravel lot. The scrape of a boot across cement steps.

And then there were the shapes. The shapes were the worst. They could come in any form, delightfully squeezing and spreading into whatever malevolent specter her brain was determined to ward off, shifting even before she had the chance to make out what they might be.

In the dark her eyes constantly tried to adjust, to compensate for the lack of light, unable to focus. She imagined her pupils expanding and contracting, the brain sending out instruction after failed instruction, the eyes sending an SOS, please send light; unable to compute.

It was precisely this inability to focus that convinced her she was seeing continuous movement, the edges of shapes whirling around her, someone standing next to the bed, a hovering orb of more blackness. She swore she could feel it, as if the darkness had its own persona, she could taste its hunger and smell its breath as she held her own, feel its grungy heat as she tried to flatten her body against the mattress.

She would try shrinking into herself. If she made no noise, she wasn’t there. And she would close her eyes and pray to be very, very small, only to hear another noise and begin the terror all over again.

In their last months together, she had learned to go numb as he screamed at her. She would find an inanimate object, a vase of tulips, a basket of bananas, and fix her eyes on it until they glazed. Her vision would shift, rendering the image in duplicate, triplicate. It was then that terror had given way to the numbness and she would project herself outside of herself, gazing down at her vacant body like some misfit angel, whispering You poor girl you poor girl you poor girl I will save you.

There had been a distinct time that she was obsessed with the moment, obsessed with the immediate horror of being the primary object of someone’s rage. Scarier, though, was the numbness that took its place, the lack of anything else except shrinking. She didn’t think of sadness or horror or hurt. She thought that they must certainly be there still, buried under something impenetrable, yes. She just didn’t cry about it anymore.

She let the whiskey bottle slide down between her arm and torso. The glass was warm and she cradled it snug against her skin. She felt the rasp of dried blood between her legs and the wetness of new blood seeping through, the dull ache spreading itself across her abdomen. In a few hours it would be unbearable. The only thing that cut through the pain was whiskey, and she’d made sure she drank her fill.

Between her legs was an open wound. A wound that would begin to heal, only to break through itself again. A wound he had stabbed repeatedly, planting something sinister deep inside her. She’d leave a telltale trail of blood wherever she went. Forever marked. Dogs would smell her. So would men. None of them knew to give up once seized with the scent.

When she finally sleeps, she dreams of Mary. Mary dressed in white, Mary in the desert. She’s not clean anymore. Instead of glowing white she is covered in blood, blood soaked through the abdomen of her dress, all that is left of the virgin child. She wears it like war paint on her face, on her crown—baptized, but with blood.

But she is not afraid.

Ashley Bethard's work has appeared in The Rumpus, PANK Magazine and Used Furniture Review, among others. She is an editor of Peripheral Surveys: A Journal of Literature, Arts and Humanism. You can find her online at ashleybethard.tumblr.com.