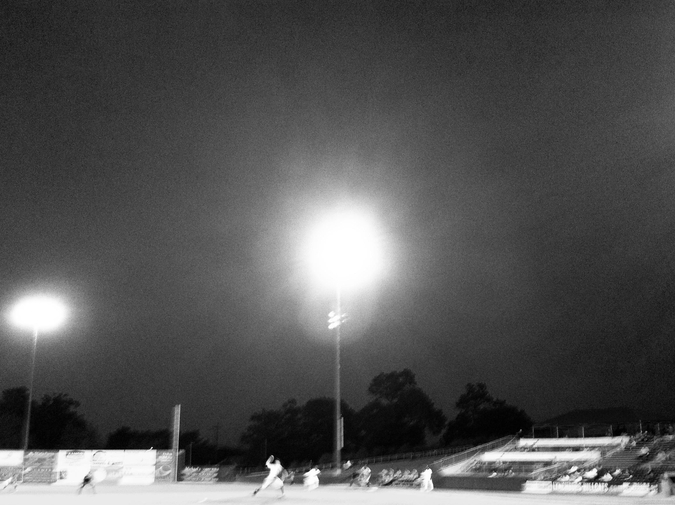 McNamara wanted off the island, a phrase he loved because it was stolen. Dominicans always said you couldn’t walk off the island; you had to hit. And even though McNamara grew up a pitcher in Northampton, he always liked thinking of the pitching mound as an island. It was the bottom of the eighth, and his White Sox were clinging to a 2-1 lead over the Boston Red Sox.

He stepped off the rubber and stared at the runner at third, a piece of shit all hustle guy that the writers adored because he was scrappy. Because he had just won a fourteen pitch at-bat against McNamara and flicked a gapper into right-center that shouldn’t have been a double, let alone a triple. The word “stranded” entered his mind.

Sixteen years ago, when McNamara was a rookie and breaking in with the Atlanta Braves, he always dreamed of playing in Fenway Park. A Boston kid playing for the Sox: what could be better than that? But he played in the National League, winning Rookie of the Year, making an All-Star game, and he suffered his first injury the year Atlanta was slated to play in Boston. Then the injuries piled up, he was traded, traded again, and again, missed a full season, became a reliever, then a starter again, and no matter where he landed, he never managed to play in Fenway.

Until now. As a longman for the White Sox on a hot June night when the Red Sox were terrible and the White Sox were treading water, fooling themselves that they were contenders. McNamara also couldn’t avoid thinking it: this ballpark was a shithole. A real fucking dump. And he’d pitched in Oakland Coliseum, the old Shea Stadium. The Red Sox could only put so much shine on a ballpark that was a hundred years old. And they could announce whatever attendance they wanted, but the place was barely half-filled in the third inning, tons of women in pink Red Sox hats, and then the place got packed in the seventh inning so in the eighth inning they could sing, of all the fucking things, a goddamn Neil Diamond song. The speakers blasted “Sweet Caroline” and the crowd roared and sang like they were heading to the World Series. When the Red Sox were losing.

What was wrong with these people?

He had nothing today. Skipper had used him four of the last five days, sometimes for one batter, sometimes for three innings, no rhyme or reason to it. He didn’t dare look at the radar gun. He was a righty facing a righty, there was no one out, and two lefties coming up. This was his last batter, win or lose. He winds, delivers, and hangs a slider that miraculously the hitter missed and weakly fouled off. 2-2.

The catcher again signaled slider. It was smart. Away, away, away, and if he walked the hitter, the loogy came out of the ‘pen, double play all set up. As long as he didn’t sling the ball twenty feet off the mound, the hitter shouldn’t see another decent pitch.

McNamara stepped off the rubber and glared at the crowd. Heads down, frowning into their phones. Vendors trudged up and down the stairs. The glow of all the electronic billboards behind him wrapped him in a blanket of bright lights: the Citgo sign and the new HD scoreboard and thousands of other advertisements and statistics shining like a beacon. McNamara was 39 years old, long forgotten by fans, or whatever this crowd was, and his manager and pitching coach didn’t give a fuck about him. Simply a name on a lineup card.

He stepped back on the rubber and got the sign for the slider. The runner’s lead at third was short. Right then, for no reason, McNamara knew this was his last season. After five surgeries, his shoulder was brittle and weak. The White Sox weren’t going to the playoffs, let alone winning the World Series. Everything was ending. He saw it with startling clarity. Which was why the idea, forming clear and perfect in his mind, made him smile, just a little, as he stepped back into a full exaggerated windup. He almost felt his manager’s eyes widening in disbelief.

McNamara swung his left foot behind him, then pulled both arms back too, all loose and carefree. His left knee shot forward like he was dancing, then up, up, up his chest, almost to his chin, and his hands come together in front of his nose. His eyes went skyward—Fernandomania!—and then he pushed with his right foot, still using his strong legs and opening his hips like the power pitcher he once was, and released the pitch.

An eephus pitch. The ball hung high in the air, arcing like a rainbow, and though he didn’t know it for sure, he later swore there was a hush over the crowd. There was, after all, plenty of time to see an eephus pitch, the way it soared to its apex, seemed to pause, and then tumbled toward home plate. Hitter and catcher both thought “Holy shit!” as the ball began to drop, and the hitter, who had been thinking slider the whole time and leaning slightly out across the plate in anticipation, lost his balance, tried to right himself, get his weight back—I’mgonnafuckingcrushthismeatball—and his right foot dug into the ground, his hips opened too fast, his front foot in the bucket, and he swung with all his might.

Later, on all the sports networks, this moment will merely be an afterthought. The Red Sox win the game 3-2, on a ninth inning walk-off home run punctuated with someone dousing the players at home in a bath of blue Powerade. So no one but McNamara was going to remember the eephus pitch, the long drop through the zone, the grunt as the hitter swung and missed badly, spinning his back toward the mound; no one would remember the soundless trap in the catcher’s glove, and McNamara whooping loudly, jogging toward the dugout, refusing to wait for the manager’s hook, the smile on his tired face one of pure joy.

Michael Nye is the author of Strategies Against Collection (Queen's Ferry Press, 2012). His work has appeared or is forthcoming in Boulevard, Cincinnati Review, Crab Orchard Review, Kenyon Review, and New South, among many others. He works as the managing editor of The Missouri Review.