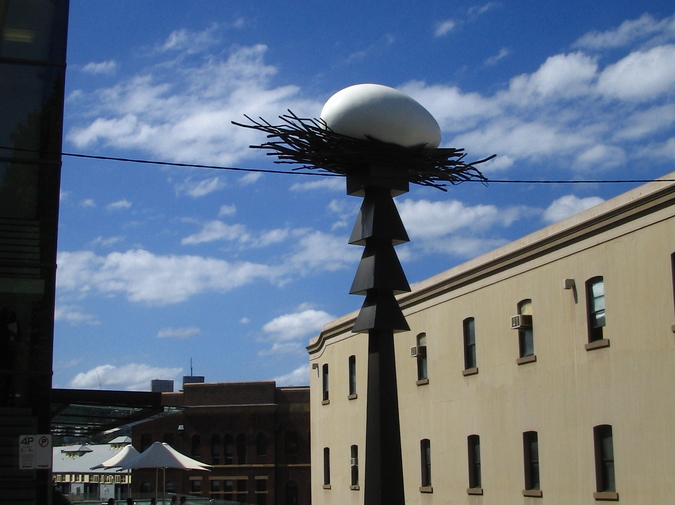 At the diner, when David has been allowed to order a cup of coffee and become a thinking person again, he will begin to attempt to isolate the exact point in time when he decided to leave his wife. His first thought will, of course, be the incident at the playground earlier that day involving his daughter, Maria. But as David watches the cream he just poured into his cup billow and ripple amongst and inside itself he will think backwards, his thoughts spiraling out further and further into the past, and he will decide that if he really wants to pinpoint the precise origin of the current situation, he really ought to man up and acknowledge the game.

It was a game David would play every morning when he woke up and every evening when he got back from work. He was mentally prepared to have to play the game at any moment while he was inside his house. It happened in split seconds; he would fumble the cup he was retrieving from the cabinet in the kitchen and think, If that cup falls on the floor and breaks, I’ll leave my wife. He would bump his car against the side of his overstuffed garage backing out and think, If that bumper just got dented or the taillight just shattered, that’s it. I’m gone. And so on and so forth. No cups ever fell and no car parts were ever damaged, and David was always able to tell himself that the game was just that—a harmless, fun little thing like so many other harmless, fun little things in so many other marriages.

David was the oldest at the Qwik ‘N Easy Mart that he managed, and he was also the only married man. He knew his wife resented his job. He had worked there for three years as an undergraduate and used its minimum wage to supplement his parents’ monthly donations, then as a fallback when he dropped out suddenly after six semesters, his parental support vanishing just as quickly. To his wife, who was dating David at this time, the passive, almost de facto way David slid into prominence at the Qwik ‘N Easy was exemplary of just how immature and reluctant to better himself David really was. Even though his job entailed a leadership position and required that David use social and problem-solving skills while patiently dealing with irate customers and lazy workers, as well as bringing home a hefty sum, all characteristics that his wife would normally designate as Good Qualities, the fact that David didn’t really work or apply himself in any way for the job, but just sort of stayed in the same place, doing the same things, living the same life until the general manager position was filled by him just by sheer virtue of him being there for so many years seemed to undermine (and perhaps even corrupt) the ideals of hard work and perseverance that David’s wife considered essential, and used to differentiate between what was a Good Quality and what was Bad. David will be able to discern this now at the diner. David will attempt to justify to himself his abrupt decision to abandon his wife and Maria as, in fact, a mature and adult decision—a self-sacrifice, in a way. He will fail.

Like this decision and so many other decisions in David’s life, the decision to take Maria to the park was made in a split second. David surmised that one of the few strong threads in his relationship with his wife, one of the traits that David’s wife surely identified in him as a Good Quality, was the devotion and care David displayed toward their daughter. Maria, like most five-year-old girls, was a handful, and even though her mother had witnessed, through her role as an elementary school guidance counselor, identifiably Bad Qualities in the children she counseled, qualities she attributed to bad or neglectful parenting, and was thus terrified of cultivating the same sort of Bad Qualities in Maria by somehow disregarding her familial needs or otherwise not being there for her—a terror she had related to David several times throughout the course of their marriage—despite this fear, when it came down to brass tacks, there were times when Maria was simply being too much of a five-year-old handful to deal with after a stressful day spent wringing hands over the seemingly insurmountable problems presented by behaviorally deficient elementary schoolchildren. And so it would fall onto David during those times to entertain Maria.

Due to David’s consciously laid back, “hands-off” approach to parenting, David was quickly designated by Maria as the “fun parent”,  or at least, David believed Maria to have designated him as the “fun parent”, as he will reflect in the diner, now suddenly unsure. These thoughts will race through his mind in microseconds, his gaze rooted to the cream blossoming in his coffee, slow and serene.

At the park, in keeping with his “hands-off” parenting approach, David sat on a bench, reading a magazine and periodically glancing up at the playground before him, his daughter prancing around gaily on the mulch under the hulking metallic playground equipment. There were several other children there with their parents, some of them like-minded “hands-off” individuals reclining on benches with magazines or laptops, other “hands-on” types playing alongside their children in the mulch or pushing their children on the swing set or ferrying them across the monkey bars. A sort of lulling white noise was created by the shrieking laughter of the kids combined with the creak of the swings and the groan of the playground’s rubberized metal rungs and hard plastic walkways underneath the children’s scampering feet. David found this white noise to be very mellowing and conducive to his idle scanning of the magazine, so when he placidly glanced up from the article he was currently reading, he wasn’t quite in the state of mind to respond correctly to the sight of Maria taking a step toward the edge of the mulch pit, a shoelace snagged under the sole of her miniature sneaker. He watched as the shoelace grew taut, seemingly in slow motion between her two feet, and instead of getting up or shouting Maria’s name or taking any other action a well-adjusted parental figure might take, he only thought, very clearly and matter-of-factly in the voice of his mind, If that kid trips and falls on her shoelace, I’ll leave my wife.

Maria fell headfirst onto the ground. She didn’t get up immediately, which was cause of enough concern for David to stand from his bench. He walked toward her, magazine clenched in one hand, mind numbed both from shock and the persisting white noise, which was lessening as the other parents and children saw the little girl still—still—lying on the ground. David finally approached her and saw that she hadn’t fallen inside the mulch pit, but that her head had landed on the bolted down, hard rubber partition that separated the mulch from the surrounding grass. He said her name. He said her name again. Other parents were approaching, deferring their curious children’s attempts to get closer to the girl. David said Maria’s name a third time and touched her shoulder. She stirred and began to turn over. David helped her, slowly rolling her over onto her back and saw how the skin around her lips was unmistakably red, already swelling. She had fallen onto her mouth.

She squinted up at David. Daddy, she said, and a dribble of red trailed from her puffed-up cheek. Her voice was wet. David cradled the back of her head, eyes wide and unbelieving. Shh, it’s alright, he said. It occurred to him to call an ambulance. He made to check his pockets even though he already knew his phone wasn’t there. He had left it at home, forgetting it in the spontaneous burst of a gesture that was taking his daughter to the park.

Someone call a paramedic, he yelled to the crowd behind him. I—I don’t have my phone. He sheepishly looked down and realized he was still clutching his magazine in one hand. He grimaced. How selfish must he look, still holding his magazine, his escape route as it were, while his own daughter was splayed out on the ground, confused and helpless, mouth swollen and bleeding? And while the other parents came up with ice packs and cold soda cans to press against Maria’s inflamed cheeks, as well as tissues and even a thermal blanket, even though it was a warm spring day, all David could do was hold Maria in his lap, feeling just as helpless and alone as he was sure his daughter did, his daughter who was not crying, only blinking up into the sun, responding in worryingly vague smiles to the gift-bearing other parents. Now was the time to be a parent, to really be a parent, and all David could do was sit there uselessly, even as the paramedics arrived, even as they held Maria’s head and gingerly opened her mouth and asked the horrifying question, Was she chewing on anything when she fell? And David looked into his daughter’s mouth and saw the mangled mess inside and almost broke right then, holding onto his daughter the way one holds onto the safety bar of a roller coaster car.

David will be completely transfixed by the coffee in his cup and the cream swirling in his coffee. He will remember as the creamy wisps undulate into soothing wraithlike patterns how the paramedics placed Maria onto a gurney, and that was when she began to cry, blubbering for her Daddy. He will remember driving behind the ambulance to the hospital, engine roaring and sirens blaring all around him. He will remember regretting his decision not to ride in the ambulance with Maria. He will remember being informed that the damage to her tongue and the inside of her cheek was minimal, but she had suffered a minor concussion. He will remember the drive home, filled with dread, his freshly bandaged and gauzed daughter in the backseat, the whole time imagining his wife, who was still unaware of their daughter’s plight (and the hour was getting late), who had spent the entire day so innocuously believing all was well and right and as it should be this Saturday. He will remember the fight that night, after Maria had been put to bed, how his wife screamed so loud all he could hear afterward was the pulse in his temples blending with the whirr of spring night cicadas buzzing outside. These memories will cycle through his brain over and over again, countlessly repeating in mere fractions of a second as David sits in his booth, spreading out time, hands in his lap, staring at his coffee cup, mind filling with sheer, indescribable chaos.

Dan DeMarco hails from Philadelphia, Pennsylvania but currently lives in Iowa City, Iowa, for reasons known only to him. His previous work can be found in InkLitMag.