The Devil and Ellen and Charles 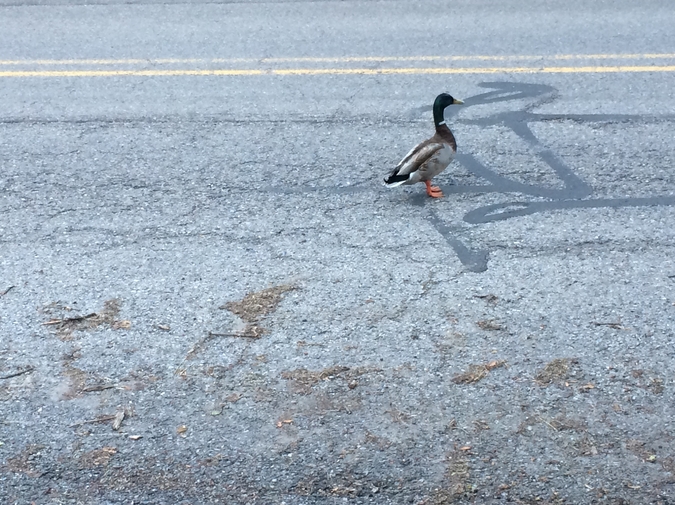 When, on August 18, 2015, the dog the internet called “The Devil” was finally cornered by the Salt Springs police department several of its victims, those sufficiently recovered from their wounds, hurried to East Alley in time to see the dog shot with a tranquillizing dart and, as it turned out, killed.

The police department’s dog officer had loaded the gun and claimed to have made a mistake (bullet not dart) which did not trouble the nine victims who had been savaged by the dog, several of whom were still hospitalized in fair to critical condition. (The first victim died after being eviscerated.) There was no internal inquiry into the officer’s mistake.

The dog was duly tested for rabies and all the living victims notified of the result, which was positive, including Ellen Chambers who had been the second victim. The day before she got the call from Public Health, she had felt odd, without a fever, but subject to an intermittent buoyant sensation, as if she were pneumatic, a big balloon or a blow-up doll. She had not told Charles, a well-regarded, well-compensated chemist and her husband of forty years, about this feeling.

The dog attack happened beneath their apartment window as Ellen was walking to their car. Charles was in the apartment, half-awake, watching an old Rocky Marciano fight on his iPad. He, wearing earbuds, thought that Ellen’s screams were coming from the ringside crowd. By the time he realized his wife was screaming, and rushed downstairs, the dog had run away and Ellen was sitting on the stone step with her arm upraised to lessen the blood flow.

He drove her to the hospital far slower than an ambulance (he had problematic vision) but, after she was treated, hovered over her through the extended interview with the dog officer, who took redundant photos of Ellen’s bandaged hand and forearm and asked that the emergency room records be sent to him. This would be a task that fell to Ellen, who always handled the tasks that required follow-up, and Charles felt, in this small moment, an efflorescence of shame.

Ellen was so composed throughout all this, chatting with the dog officer about the perils of his job, that Charles, had he not known the numbing power of shock, would have called her cold. But, as he was both educated and fair-minded, he did not.

He did not, in general, think of her as cold although, not long ago, he had done some research on the internet about grounds for divorce, specifically “constructive abandonment.” But that was just one thought, or, perhaps, one deed, and Charles believed it did not skew a lifetime of gratitude for Ellen’s competence which, he thought, was his wife’s pre-eminent quality (she did not agree), and which, over the course of many years, had benefitted him greatly.

Because Ellen did not tell her husband that she would have to undergo the series of injections, which the Public Health nurse had assured her were “not too bad,” Charles found out for himself by opening the appointment confirmation letter, which he had assumed was another dreary municipal exhortation to get a flu shot.

Out of the dazing blue that dogged, and occasionally demoralized, Charles, he discovered that he did not want to accompany Ellen to get her shots. This discovery astounded him; if occasionally ill-judging, he felt he, nevertheless, had been a supportive spouse—and his shame rose up again, like bitter salts, from a fairly complete degradation of his internal component materials.

Being a chemist, he recognized, with a sharp thrill, what was happening to him. He went to the pantry off the kitchen, which was big enough to hold the step stool where he usually tied his shoes, and sat, to best experience his breakdown. The thrill had addled him as did his impulse to abandon Ellen in her hour of need and he wanted to sit calmly and reflect.

Ellen, meanwhile, was at the animal shelter trying to get up her nerve to meet puppies. She had told the shelter manager that she was deathly afraid of dogs since the attack, and had not, in fact, been very fond of them before it. The manager referred to the dog’s ambush as “your attack.” This, in addition to her terror at the sound of many dogs barking wildly, derailed her as she assumed the manager thought that she had attacked someone which, of course, she would never do. After they got all this straight Ellen began to cry. She had not allowed herself to cry since the last episode of “Cheers” was telecast.

“I’m not ready for this,” Ellen said to the manager and left.

By the time she got home she was mortified that she did not want to adopt, or even pet, any dog, even an abandoned puppy, even the most affectionate, kindest, abandoned puppy. Surveying the distance from the car to her building’s door, where the Devil had come trotting up and, with no nonsense about him, repeatedly punctured her forearm with a full set of teeth, she decided that what she really needed was a hammer (something with which she could both club and claw, small enough to keep in her handbag) and she felt again that odd, buoyant sensation. “There is no help for this,” she thought, “for all or any of this,” as her body slid away from her and bounced up the path to the door, swinging her keys in its hand.

When she got into the apartment she saw, on the hall table, the opened letter from Public Health. “Ah, he knows,” she thought, holding it in her unbandaged hand.

Charles, sitting in the pantry, heard Ellen enter and thought he should go out lest some unconscious move of his make a sound that startled her.

Opening the pantry door he sang out, “Ellen! I’m home,” and something about the familiar words revived for him, in this moment of collapse and confusion, his usual life, their life, where he would greet her, coming, not out of the pantry, but out of the world; where she would greet him with a chaste but welcoming kiss, and put an excellent dinner on the table. “Ellen, I’m home,” he said again.

In this instant he knew he could never manage a divorce. There would be all those papers to keep track of, some of which would need to be signed, some not. He would need to sort them; therefore, he would need to develop a system for sorting. And there would be a time when they must, possibly by painful and expensive proxy, pick the bones of their possessions. “Ellen, don’t be scared. It’s me. I’m here,” he said. And then he saw her.

He had forgotten all about the opened letter; in truth, had half-forgotten she had been savaged, he was now so full of his own uxoriousness.

Ellen stood in front of the window which, despite the chill, she had opened. She turned to him, serious and serene.

As swift and sure as a panther, as unlike himself as he had ever been, he ran to the window and closed it. And, equally unlike herself, Ellen swayed and fell gently into his arms, sobbing, and murmured, “I’m scared out of my mind.” Charles, with a supportive arm around her waist, took her to bed.

In time, they found themselves in a white, cold cubicle in the Public Health building. Ellen had bared her abdomen and lay on a metal gurney. Charles stood at her head, holding her fist.

“Look at me, look at me,” he said urgently as the nurse, bearing a stainless tray full of rattling implements, advanced upon them.

Ellen looked at her husband and she felt the now familiar sensation of conveniently leaving her body.

“I’m flying,” she said to herself, hovering above the scene. She saw Charles grip her fist tighter as the nurse swabbed her belly. “Look at me,” she said to both of them. “Look at what I can do!”

Mary Clemens lives and writes in upstate New York. Her work has appeared in The MacGuffin and The Tishman Review, among others.