The Bottom of the Order: Your 2003 Detroit Tigers 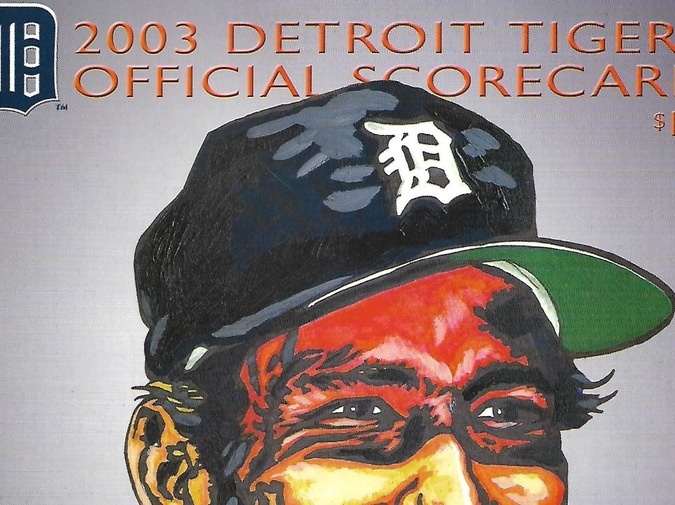 The thing I can't wrap my head around, when it comes to the 2003 Detroit Tigers, is what it must have been like to show up to work every day. What must it have taken, as the losses mounted – up to and including the 119th, the most defeats ever amassed by an American League team, and tied with the '62 Mets for the most losses in major league history – to rouse oneself for the excruciating daily repetition of a very public abasement?

What was it like for Alan Trammell – one of the best shortstops of his generation and, along with Lou Whitaker, one half of one of the sweetest, surest double play combinations in history – to oversee the whole thing from his manager's post in the dugout?

What must it have felt like to suffer the hundredth loss of the season, only to look at the calendar and realize it was not yet September?

Dmitri Young was the best hitter the Tigers had in 2003, an All-Star, for what that's worth, who toiled valiantly to put up decent numbers amid all that frustration, the clubhouse shenanigans and interpersonal acrimony. How aware was Dmitri Young of the glacial nature of time from that point – August 30 – until the final day of the campaign? A month spent as a hundred game loser. Waking up with that. Playing through that. Going to bed with that in his head.

Such a brutal gauntlet would surely daunt the staunchest among us, but it's only an extreme example of how baseball-time works, which is to say how the game tinkers with the very foundations of the universe. Because baseball, inescapably, moves slowly. Stubbornly, as everything else speeds up until it begins to blur into abstraction, this stupid game – despite all efforts to speed it up – remains befuddlingly slow. There's no way around this, it turns out, because it's baked right into the marrow and blood of it all. This isn't to suggest that there aren't frantic, ecstatic bursts of energy studding the proceedings, but these prove, on balance, to be the exception to the rule. That's why they're so damn exciting. Scarcity breeds demand.

My kids, baseball fans at 9 and 13, are just beginning to grasp all this. Pity them; they have been born into this. I have undermined their defences since their respective arrivals in this world, and so they have only known a home in which baseball is revered, its apparent flaws held aloft as proof of its sublime design.

(I comfort myself with the knowledge that all children are in some way indoctrinated by their parents into belief systems of varying degrees of utility and malignancy.)

At a field near here – a beautiful diamond, up by the university, and partially paid for by the Toronto Blue Jays' charitable foundation, with all the bells and whistles – we happen by just as players are gathering ahead of a game. As we have time to kill, we take the opportunity to observe some of the pregame protocols and routines, almost liturgical in their rigidity. Tarps are removed, pins are placed at home and at first and third. String is extended between these, and the baselines are drawn in powdered chalk dropped from the belly of a small contraption on wheels, using those strings as guides. The string and pins are removed, and stowed along with the chalk-bellied contraption in a utility shed down along the first base side of the park. Young men in one of two uniforms begin to take the field absently, filling the warm, thick air with the sound of balls landing in gloves. A  pair of coaches occupy the line halfway between first base and the foul pole, one with a bat, the other a glove and a bucket of balls. Three young men stand, gloved, approximately in center. The coach with the bat tosses himself a ball, swings choppily up through it, sending it arcing into the gathering dusk. One young man takes four smooth steps, allows the ball to settle cleanly into his glove, then transfers the ball to his throwing hand, coils, and unwinds a throw to the second coach, who fields it and dumps it back into his bucket. Repeat, repeat. The other team's players are sprinting, half-heartedly, from the left field line to a spot near second base. In the bullpen, a pitcher warms up. Elsewhere young men – they're maybe fourteen years old, fifteen, these players – stand around and joke and posture and swear. There is spitting. The aluminum bleachers fill slowly. Parents come and erect their own folding chairs, chat with one another, check their phones for the practice schedule, the next game, planning their weeknights of quick dinners and drives and hours spent just this way, in these same folding chairs.

“Are they starting soon” asks one of my boys, hoping we'll stay to watch. I ask a man nearby. He checks his watch. “Forty-five minutes,” he says. We sit and talk about the Blue Jays while the sunlight comes to appear filtered and the shadows lengthen and soften until finally the lamps atop their stanchions provide the majority of the illumination.

Summer, we call this. Nothing of consequence happens for long stretches, giving us time to roll in our mouths the game's beautiful language – Baltimore chop; Texas Leaguer; can of corn; dying quail; fungo; Eephus – and pass between us a bag of sunflower seeds.

The young men pitch and swing and catch and throw. The mosquitoes set in. Traffic whooshes by, disinterested. At some point, almost without our knowing it, an umpire appears and a proper game congeals. The players align into formation and a recognizable order is established. We clap, lean forward, try to guess what will happen next.

Innings pass (two? five?) and I tell my kids we have to leave; it's long past bedtime. None of us know the score. None of us can name the teams. We've simply stumbled onto this game, taken some of it in, and are now moving on. We'll do the same again soon, here or at some other park in town. The chance constitutes much of the appeal. That, and the way time, in deference to the heat and the nature of the game, goes sticky, stretches, comes to resemble something other than itself.

Sometime after the 100th loss, but before the 119th, my not-yet-then-wife and I found ourselves at Comerica Park, taking in a game between the Tigers and Cleveland. What can I say? We are drawn to historic, flamboyant, catastrophic displays of failure. More to the point, she and I, having early in our relationship attended one last, glorious game at the beautiful wreck that was Tiger Stadium, wished to see this new park they'd built to replace it, and so bought tickets high in the upper deck on the third base side. At the outset of the roadtrip the American border patrol agent, having inquired as to the purpose of our crossing, reacted with some incredulity. His words, I believe, were, “You're going to see the Tigers?”

We had dinner somewhere near the Fox Theater and we strolled over to the stadium, took photos of the giant tiger statues flanking the front gate. In one, my not-yet-then-wife is wearing a navy blue Tigers batting practice jersey which had somehow come into her possession, the old English D in orange on the chest, her hair in pigtails, glasses sliding down her nose, while one of the stone tigers lifts its clawed foot over her head and snarls.

We walked lazily around the concourse and saw the carousel and the ferris wheel, had beers and hot dogs. We mounted the ramps to the upper deck and took our seats, where we ate popcorn and put our feet up on the empty seatbacks in front of us, and we clapped and hollered. We watched a soft dusk fall over the empty shell of downtown Detroit. The game wrapped up – who won? what was the score? – and then we found the car and retreated to our motel room. The next morning we drove home. Sometime thereafter the Tigers lost their 119th game. The season ended. Everyone moved on.

It could have been worse, if you can believe it. Animated by desperation, or maybe just lucky, the Tigers won their last two games and four of their last five.

Blessedly, the end came on a cool, cloudy Sunday afternoon, in front of an announced crowd of 18,959 home fans who were on hand, it feels it safe to assume, both to say goodbye to a miserable season and to see, maybe, if the home side would set a modern record for futility.

If you're Dmitri Young and it's the tail end of September and you're 47 games behind the Twins with two to play, what do you do with that? One more loss and that's it – you're officially the losingest losers to ever take the field. What the hell does a person do with that? You continue to show up is what you do. You show up and you win one lousy fucking game and you go home and sleep and then you show up again the next day, because there are winners and there are losers and, among all this world's sad and unenviable fates, at least you're in the goddamned game.