The Bottom of the Order: Snap, Go, Fling 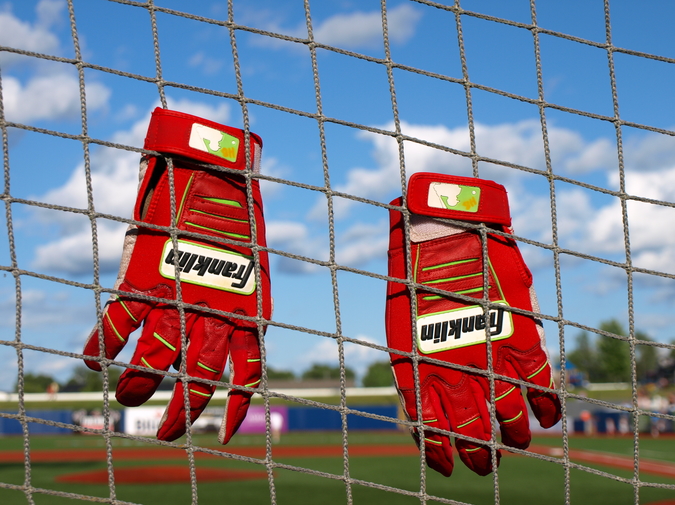 Like much of the Midwest, Grand Haven, Michigan, is a version of America that America imagines when it is feeling kindly toward itself: earnest, polished, with a foot in the past, whether defined as agrarian or neon, and one firmly in the present, if the present is abundant craft beer and wireless internet. Freshly painted fences sit alongside ghost signage on old brick walls. Beach parking is free.

We've only just come here from the Upper Peninsula, which offers beauty embarrassing in its abundance. We lay on our backs on a stretch of Superior shore and watched the Perseids pour their dazzling debris over an incredible sky. We swam in the icy water of the world's largest lake, small beneath clouds of pink, violet, and gold embroidering an already extravagant sunset. Atop the tall bluffs behind us were perched white pine, yellow birch, and red maple.

But the U.P. has no minor league baseball, and you can't call a summer 'summer' without minor league ball, so we have made our way across the Straits of Mackinac to the mitten. En route we've driven through any number of former towns that underscore, as proud Midwesterner Hanif Abdurraqib has written, the difference between “a place that is closed, and a place that has closed.” Great tracts of the state, away from the beaches and the national parks and the suburban business campuses, are abandoned and falling into ruin.

Traverse City's a tourist town, though, and seems to be doing just fine. They have a team in the Northwoods League called the Pit Spitters. Both of those things require explanation. The Northwoods League is a wood bat league, not affiliated with Major League Baseball. In this way it differs from the typical minor league of your imagination; these players are not about to be called up to the big club. Instead, they're college players on summer furlough, using their time to get experience with wooden bats and grass fields (in NCAA games they swing metal and play on plastic). These kids spend the hot months playing a short season in the hopes that the experience will make them more attractive to Major League teams. The NWL has teams dotting the Midwest – Minnesota, Wisconsin, Illinois, and all the way up to Thunder Bay, Ontario. As for the nickname, northern Michigan is, they'll have you know, the tart cherry-growing capital of the United States.

The name is great and local and quirky, but the charm evaporates a little when you consider that the Spitters' name and logos were crafted by the same San Diego-based design firm that concocted the brand identities of the Amarillo Sod Poodles, the Lehigh Valley Iron Pigs, the Rocket City Trash Pandas, the Richmond Flying Squirrels, and the Akron Rubber Ducks. This, like most apparently carefree things you're likely to happen upon these days, is a carefully curated experience.

Our seats at Pit Spitters Park are right behind the dugout on the third base side. It's $2 hot dog night, and $2 beer night. The lineups are long. The Pit Spitters' starting pitcher is a skinny kid with long hair and longer limbs. His pants flap above his ankles, as though he's experienced a growth spurt since being fitted for his uniform, which very well might be the case. The night is lovely and cool, the sky surrenders its color slowly. The home team jumps out early, scores often.

The cherry and strawberry seasons have passed; the apples are reddening. Only a few games remain. A Pit Spitter lays down a bunt, and the runner on third crashes in: a perfect suicide squeeze. Cheers rise up and then diminish. The lanky pitcher twirls a gem. The Spitters blank the Rockford Rivets, 8-0, and we drive out of Traverse City through darkened fields.

In Grand Rapids a week later we sit on the first base side a dozen rows up as the West Michigan Whitecaps take on the Great Lakes Loons in a ballpark named for a bank. The Whitecaps, managed by former Tiger Lance Parrish, are a Detroit affiliate in the Low A Midwest League, which means their job is to sand the rough edges off twenty year old prospects in order to ship them higher up the chain. A few of them might even be Tigers one day, though the odds are long.

We're here to partake of what Whitman identified when he said that baseball possesses “the snap, go, fling, of the American atmosphere.” We find it, but not necessarily on the field – or on the field, yes, but also in the attendant hucksterism and commerce, our placement not as fanatics but as customers, targets of a stultifying corporate control made insidious for being nearly undetectable. It's the homogeneity that ultimately gives it away, the sense that all corners have been rounded and the inconvenient or cumbersome aspects of the experience have been focus-grouped out of existence. Quirks exist only insofar as patrons have indicated they approve of certain quirks to give them some thorn upon which to hang this feeling of being alive and right here, this moment, taking photos and posting them to social media. The hashtags are provided for you on the videoboard. Remember to like and follow.

Pleasure is available to us here, provided we suspend any cynicism and, quite literally, buy in. We do. The Whitecaps defeat the Loons, 5-1, and the children are thrilled with the free duffle bags we've been given, sponsored by a local energy provider, and the hats I've bought them. I'm happiest with the memory of the organist situated right on the concourse, just behind home plate, and I marvel at her ability to fill out her scorecard between musical flourishes. How does she keep it all straight? My scorecard is unfinished; I'll total the pitching lines tomorrow morning over coffee.

In the morning, back in Grand Haven, we stop into Hostetter's News Agency, corner of Washington and 2nd. The place is a jumble, a corner store straight out of somebody's childhood, one preceding mine but nevertheless adjacent to memories I harbor. Immediately inside the door a TV blares an episode of Columbo at near full volume. The woman behind the counter greets us in a flat, shouty tone. She's eighty if she's a day. There's a shelf behind her head with pornography on it – on VHS. An aisle of magazines, a full shelf of puzzle books. There is candy that has partially melted, or gone brittle with age. Faded postcards. In the back there's a selection of tobacco – cigars, jars of pipe tobacco, exotic cigarettes. For $20, you can have a copy of the Tribune, wrapped in plastic, from the day after the White Sox won the 2005 World Series. On a rack hidden in a strange warren in the middle of the store I stumble onto unopened packs of baseball cards from when I was my daughter's age, and I giggle with delight. They are priced with marker: $1.65. I buy a handful. We also get a New Yorker and a Sudoku book and some Tootsie Rolls, and then we head to the beach.

We sit motionless beneath flapping umbrellas. I open the first pack of cards, and Ken Griffey, Jr. stares up at me. The sky is blue overhead, but dark to the west of us. Rain moves in visible bands off Wisconsin and passes across the lake, makes landfall north of us and moves on. The sun burns back into into its full glare, and the horizon appears to lift up into the sky's white phosphorescence. Griffey's following through, bat flung out behind him, probably sending a double bounding off the Kingdome's blue wall. The yellow 'S' on his batting helmet is brilliant, and the white of his uniform is crisp, bright, and impossibly beautiful.