The Bottom of the Order: Jim Beam 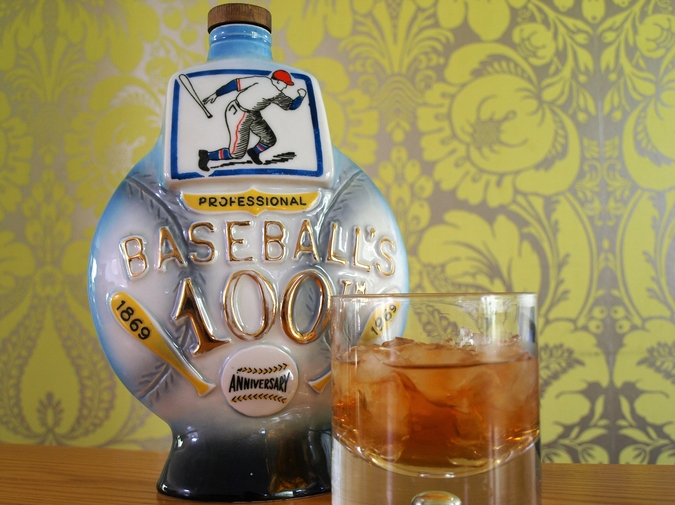 I write this from a subterranean lair packed tight with things: books, CDs, LPs, cassettes, an old laptop or two, and a pile of baseball memorabilia. This is where I do my writing, on a desk among all this old stuff. The desk is in fact an old teak table, the one my wife and I used to eat on in those apartments we shared, with their warped floors and thin walls, and then in the kitchen of our first house, a prefab bungalow in the country. The table moved with us to this house, 130 miles west, give or take, about a decade ago, and as it did it shifted use.

Among the the piles of baseball junk, alongside a Ted Lilly Pez dispenser, a half-dozen souvenir balls, several bobbleheads, and a small toy Jose Bautista, there rests a ceramic liquor decanter, which is empty now but which once contained whiskey. Specifically bourbon. Specifically Jim Beam.

Bourbon's not really a baseball drink. I usually favor beer with my peanuts, popcorn, or hot dogs, but the connection isn't too much of a stretch. Beer's best on a hot afternoon, while bourbon on ice is the taste of close summer evenings, and on such an evening, if you're anywhere near where I'm at, there's likely a ballgame playing somewhere, on some device or other, in the next room, or behind the screen door, where you can hear it just enough to glean the count and the score, and you know by the rise in the announcer's voice when something important's happening.

The decanter is oddly shaped, bell-like, I guess, with squarish shoulders and a narrow neck. The bulk of it is a baseball, which sits atop a small flaring, just wide enough to permit the whole thing to stand. Overtop the baseball, in small black and large, faux-gilt lettering, are the words PROFESSIONAL BASEBALL'S 100TH ANNIVERSARY, and off to the sides the dates 1869 and 1969. Looming over all that, in the rectangle which pushes the vessel's shoulders out, is the image of a faceless righthanded batter who, having just struck the ball, is dropping his bat and surging forward out of the box, toward first base. On the back there is printed, within a blue-outlined shield, the old lie about Abner Doubleday as the game's creator, and the mention of the Cincinnati Red Stockings as first team of paid pros.

Baseball is this year celebrating the 150th anniversary of that same date, and those selfsame Reds are commemorating the occasion by wearing an assortment of handsome and/or goofy throwback uniforms, all of which means this bottle is itself now fifty years old. It came into my possession about fifteen years ago, but before that I can't trace the chain of custody, except to say that whoever first owned it apparently purchased it in Wisconsin, according to the registered “State of --” sticker planted on its flank.

The shape and design of the object speaks to me of a time only shortly before I was born, a time of large cars, of my father's pipe smoke and plaid pants. It evokes Earl Weaver, and large, ovoid stadiums with artificial turf, accessed by mounting concrete spiral ramps, like artless Guggenheims. There was a particular quality of light in such stadiums, somewhere between parking lot and arcade, and in their bowels lay ill-lit, circular corridors, stacked rings of them, all indistinguishable from one another. In their lifetime they represented several different things: progress, unity, artificiality, decline, blight.

The decanter came into my hands empty, and I have never poured a bottle of whiskey into it. Still, if I remove the cork stopper and lean over the opening it smells faintly grainy, and there is a whisper of alcoholic tang. The scent leaves a dry, dusty, phantom sensation on my tongue, inspiring a thirst it refuses to satisfy.

It was a gift from my friend Paul. Paul has a habit of giving admirably thoughtful gifts. He also bestowed unto me the Billy Ripken FUCK FACE card, for example, which I keep under lock and key.

We met in grade school, were tight friends through high school and a couple of years of university, and remained close thereafter, though he's hopped around Canada, from its eastern extreme to the Pacific timezone, while I've moved to a part of Ontario that you're not likely to be passing through. Paul's in the B.C. Interior now, with an awesome wife and their sweet young boy.

He's also just about the most intelligent person I've ever known, with an aggressively restless curiosity that makes him dig into everything that catches his interest, and the intellectual capacity to haul it all in. A conversation with Paul darts from Bruce Lee's ouevre to string theory to the history of fly fishing before you can settle yourself in your chair.

I was pretty much straight edge in high school, give or take, but once out it was like I'd been let out of prison. Paul was right there with me. We started with tobacco in its appealing variety of forms, and found whiskey right after that. We had tastes that ran from the louche and cheap to the high end, though God knows how we afforded any of it. It's hard, is what I mean, to remember a time before these responsibilities.

But that was a time of wondering if we'd managed to become adults yet, and we were using intoxicants to dip a toe into adulthood, making decisions regarding our own consciousness and wellbeing, choosing the poisons introduced into our bodies and owning the consequences. We used to go out after midnight, to the boardwalk through the Mer Bleu bog east of Ottawa, where the water was still but the air moved with croaks and hoots, and the flapping of wings. We'd smoke cigars and take nips off a flask and talk until the light came.

In a shitty motel in Tucson we drank Snakebite, an ungodly mashup of whiskey and cider, purchased at a nearby bulletproof glass liquor store, and then passed out on the bathroom floor. We smoked cigarillos in Saguaro National Park looking back over the city sunk in its bowl, shimmering in heat. Then we drove up to Seattle and crawled by Kurt Cobain's house in a rented Oldsmobile, gawking.

I see Paul every few years now, and I'm otherwise terrible about keeping in touch. Life, you know. Kids. Whatever. The usual. Excuses, really, but I'd like Paul to know that I miss him.

Chief among the wonders of aging is the degree to which things change, suddenly and without warning. Scotch used to be my whisky of choice, but something changed. I still drink it if it's offered to me, but now I do so knowing that the next morning it will feel as though someone has placed a paperweight on my occipital lobe. I could take up rye, I suppose– I'm Canadian, after all. But I guess I've decided I prefer bourbon. I like all of it – Bulleit or Maker's or Blanton's if someone else is paying, and Jim Beam if I am. One thing about it is that I don't feel guilty putting ice in my bourbon, whereas my father's voice in my head wouldn't let me sleep if I watered down a single malt with cubes.

The other night I mixed an Old Fashioned with a heavy pour of Beam and I listened to the radio call as Vlad Guerrero, Jr. hit his first homer at home for the Blue Jays, and I thought about driving with Paul to Montreal to see Tony Gwynn go 4 for 5 and collect his 3000th hit with the Padres while Vlad's father went 2 for 4 for the Expos. San Diego won 12-10. I was twenty-three years old. We drove home late at night and the world was large and wild, and I felt embryonic.

When I look at the Jim Beam commemorative baseball decanter, and I think about all that – about how old baseball is, about how old that decanter is, and about how old I am, and Paul is, and everything we've seen and done, apart and together – the air around the thing starts to hum just a little. I become aware of the weight such objects acquire, and the gravity they then come to exercise on us.

It would be so easy to say what needs to be said, though I never have. So: thanks, Paul, for the decanter, and the Billy Ripken card, and for baseball games, and the talks,  and for getting drunk with me, when we were much younger, and the whole world was still dizzying in its novelty.