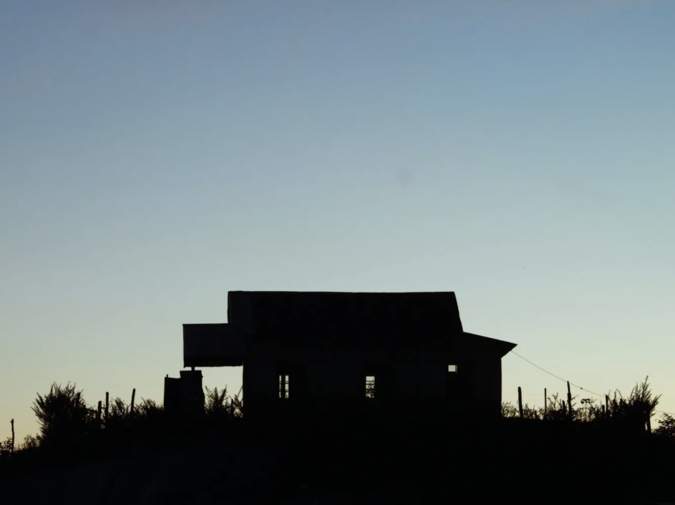 She kicks him in the stomach and then runs at him, screaming, shoving him into a bookcase. He tries to grab her and she scratches at his arm, the nails going deep, sinking into the skin like boots in a marsh. He throws her off and she howls. She imagines ripping her shirt off and pounding her chest like a primate but instead grabs at the skin of his neck, twisting, twisting, like an Indian burn. He yelps and tries to wrestle her to the floor so she knees him, knee in, knee out, knee in, knee out and he is choking, gagging, and she is wrapping her arms around his neck and he is growling, “Fuck you, fuck you,” quieter and quieter, a decrescendo, and she is thinking, “I will not die today, in this Airbnb.”

The body is still there. It is where it was when it became the body, by the bookcase. Books on acting and Great Hikes of Los Angeles! surround it, a red snow angel among the volumes. A bookmark, dislodged from its purpose, lies on the floor and flutters in the air conditioning. She stands, panting, swaying, off to the side, by the breakfast nook and the half-kitchen. She is afraid to walk past it, to the bed, or the door. She stands and sways. She feels as though she has just woken up. Her brain is muddy and the components needed to make a thought are out of sync. They are grinding against each other in a cacophonous roar, like perforations on a film strip not aligning with the sprockets of the projector, so the strip sputters and melts and erupts into flames.

She crouches, sinks, her body feral and warped and not hers anymore. Blood is seeping onto the books, onto Meisner and Stanislavski, staining them, ruining them, surging from where the sculpture made impact. The sculpture, it is somewhere in the room but she is afraid to look, to scan the surroundings. She tries to make herself just stare at the bookmark fluttering but her eyes refuse to focus on it and all she can see is the body, huge, and looming, a landscape of bile and pores and ooze. She throws up. She collapses as the vomit mixes with the blood, and the tributaries of waste rush toward her face. She is unable to move her head so she closes her eyes. The mixture is warm. It laps at her cheek. She thinks about herself lifting the sculpture. At the first moment of impact she had convinced herself that he was empty inside, that if his skull were to shatter, it would be like smashing porcelain, like splitting a vase, that at most dirty water would come out, or some dried up weeds.

She closes her eyes and fumbles her way to her suitcase and extracts the first outfit combination she can sense by touch. She takes off her ruined clothes and replaces them with the new ones. She thinks she can hear the body breathing, trying to match the rhythm of her own panicked breaths. She holds her breath to see if she can catch it in the act, but it’s too fast, and it stops; it knows she’s listening. She crouches back down on the floor. She makes her brain think: she thinks about What to Do; she thinks about checking for a wallet, uncovering who this stranger, this attacker, is—was—now just a pile, a mess to clean up. She erases the thought. Eyes closed, she crawls around on the floor until she finds a pair of shoes. Her palms and knees are sticky and wet. She crawls to the front door, reaches up, and can’t undo the lock. The mechanism with which to open the door feels insurmountably complicated. She starts crying. Maybe the body can undo the lock. She can hear it crying, its nose full, its voice small and nasal and whimpering. She doesn’t know how the body got in, before it was the body, or why. Why it slipped in, while her back was turned—excited, her first vacation in years! She doesn’t know who it was coming for, whether it died in vain. She leans her head against the door and her body shakes and rattles like it does when she’s having an orgasm but it feels like the inverse of that, like a sun collapsing, a supernova, and she imagines that she is on a chalkboard, and it is being slowly erased.

Erin Kelly Smith is a writer, director, and film editor. She lives in Los Angeles with her husband and cat. You can find her on twitter at @erinkellysmith.