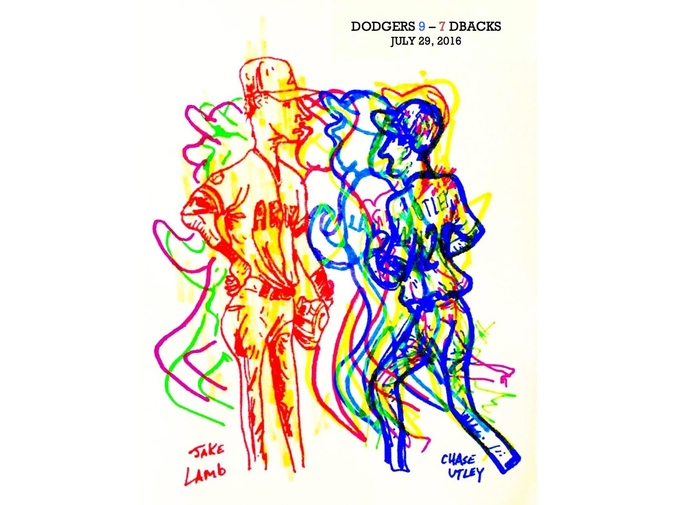 The Big Inning began in March 2016, with the goal to capture each day of baseball in the form of a single inning.

And with the idea to make you think: What is an inning anyway? Baseball has no quarters, no halves, no periods. There are extra innings, 1-2-3 innings, clean innings, early innings, perfect innings, innings eaters and the easy joy of the seventh-inning stretch. We speak of pitching greatness by the inning: innings pitched, consecutive scoreless innings, perfect through seven innings. With no regard to any sort of clock, the inning is two sides of one coin, a top-and-bottom sports unit not repeated anywhere else.

So if for no other reason than to follow the game in a new way, think of the inning as its own unit of highlight. And think back to a poem, its last lines, Hemingway in his high school years.

He slams that ball upon the bean,
Almost seems to make it scream.
The center fielder nabs the ball;
It seems as if t’would make him fall.
But stop of this rank stuff,
Just one inning is enough.

Beachballs in the bleachers at Dodger Stadium. Popcorn-eaters in the front row. Palm trees. Hollywood. Vin Scully alone in a broadcast booth, talking by himself, talking to us. Assuring the world that all’s well in Dodgeralia. Calm. Composed. At home, in a park he’ll depart at season’s end. Handpicking his words, off endless branches, branches’ branches, in a deep memory he builds, maintains over many years, keeps polished like a jewel. He seems, and I quote from Ogawa Yoko’s “Transit” here, to speak words into the palms of his hands, and then present them to me one by one.

A media anachronism in all the right ways, balking at all self-promotion, never himself the brand—but a presenter, a storyteller, an admirer, informer, describer, a friend. A Dodger fan.

He surveys the ballpark at the start of the 7th inning, notes Clayton Kershaw with AJ Ellis in the home dugout, Zack Greinke absent across the way, on injury rehab for Arizona. And then, almost on cue, like the windy rustling before a rainstorm, a pause, with what we all know must be a story on the way.

“Pitchers hanging out with pitchers,” he starts, “and if they’re gonna hang out with anybody else, it would be a catcher.”

The ears of L.A. perk up, living rooms and passenger seats go quiet, with the volume dial turned up to hear this man speak.

“People always ask me: What was the difference between Sandy Koufax and Don Drysdale? Well, when the Dodgers were on the road and we had a night off, Sandy would go to dinner with either a backup catcher, or a backup infielder. Just the two of them, they’d go quietly and have dinner.”

Kenta Maeda sets up on the mound, fires, and a swinging strike from Wellington Castillo.

“But Don Drysdale?” says Mr. Scully. “A pied piper. When Don went out, half a dozen other guys went with him!”

And with the story not quite over, he’s interrupted—an RBI double in the gap from Castillo:

The timing was close, almost perfect, a whole story nearly wedged within the length of an at-bat, some future-reading ability no one else has been able to match. His colleague, Rick Monday, describes it like this, the superhuman skill of story:

“His timing is impeccable. It’s like the game waits for him. We have a little joke among us. When Vin starts one of his stories, the batter is going to hit three foul balls in row, and he’ll have plenty of time to get it in. When the rest of us start one, the next pitch is a ground ball double play to end the inning.”

Vin rolls on, win or lose, within the cemented cachet of a legend. A hall-of-fame face of a franchise. The actual Dodgers he narrates… not yet at his level. Not always, at least.

The rundown, of the top half of the 7th:

Kenta Maeda’s in the dugout looking like a sick dog, his ‘W’ long gone. Polite. But blue. Nothing he can do. Dave Roberts stands against the dugout railing, fingers and hands linked, arms hung over the light-blue padding.

The first-place Giants are slumping big time. The Dodgers have snuck up to two games back. Suddenly back into the race. Kershaw out and the NL West tightened up, somehow. But then, this. Seven runs in the seventh. The luckiest number gone sour.

“A big inning,” says Scully, refusing to sigh, “eleven men come to the plate, and a whole bunch of ‘em score!”

Bottom of the inning on deck. With all hopes sunk.

Brendan Donley is a writer from Oak Park, Illinois, and recent graduate from Columbia University. His work has been featured in or is forthcoming from The New York Times, Byliner, Pithead Chapel, and VICE Sports. Enjoy the rest of his work at The Big Inning, a home for long-form baseball columns. You can follow him on Twitter @big_inning.