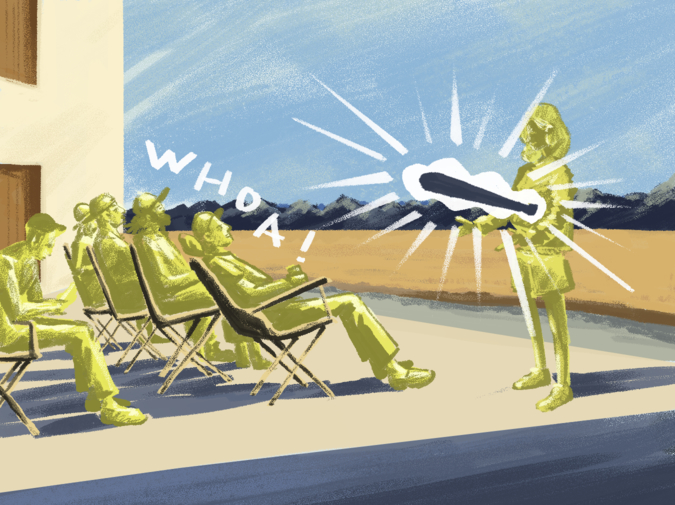 The bat was a gift from her father. It was a souvenir bat, one-of-a-kind. “This bat,” said her father, “is more than just a bat. It is a special bat, a valuable bat. It is not to be used. It is not to be sold. It is to be displayed and admired, hung on the wall or kept behind a glass cabinet or, from time to time, cradled in your arms, like a baby. It was my father’s bat and then it was my bat and now it is yours. You will love this bat. You will love it like a son, or a daughter, or, if you choose not to have children, like a dog or a cat or a pony or a very spectacular fish.” Then he disappeared. She turned seven. And then eight and then nine and then ten and still no father. As the years passed and the image of her father began to fade, Sophia wondered if the whole incident hadn’t been a dream — but then there was the bat, material proof of her father’s abandonment. She kept it under her bed. Sometimes, she remembered her father’s command to love the bat like a child. But she was his child, and he had left. Was that any kind of way to love a child? Or, for that matter, a bat? No, Sophia concluded, it wasn’t. That wasn’t any kind of way to love at all.

She moved often. The bat came with her. To Philadelphia and Denver. To San Diego and Nashville. It followed the man with the cello to Chicago (first heartbreak) and the man who loved pictures to New Orleans (second heartbreak) until, at last, it arrived back home in New York City. Sophia left it propped in the hallway, next to the bathroom. Boyfriends would joke about it. Whoa there little lady, they’d say, hands up in surrender, you’re not planning to beat me up, are you? Then she would explain about the bat, and their eyes would go wide. They’d run their hands over the signature, marvel over the date, they’d smell the wood, they’d assume batting stance and take a few swings and suddenly they were boys again, their eyes dreamy with the glow of imaginary stadium lights. Could it really have belonged to him? they’d ask. Yes, she’d say, it was his. You’re sure it wasn’t someone else? they’d say. Nope, she’d say, it was him all right. More often than not — to Sophia’s continual surprise — this turned them on. They’d ask to go to the bedroom immediately, and, if it didn’t bother her too much, to bring along the bat.

Frankly, baseball meant nothing to her (and, frankly, neither did the bat). It wasn’t that she disliked baseball, she just felt completely neutral towards it. She felt the same way towards baseball as she might towards a plain wafer. This blew the boyfriends’ minds. That level of indifference, they reported, was acceptable for anyone else, but not for her, the owner of the Bat. The Bat, in capital letters, an entity unto itself. Once, a boyfriend took her to a Yankees game. It was incomprehensible to her. The men barely moved, shuffling lazily about the field, as if bored. The bleachers were sticky with beer. The sun bore down on the players like an evil fist. She ate a hot dog and felt ill. The only thing she liked was the organ music. She found it charming. She kept looking around, expecting to see a plume of ornate, silver pipes bursting out of the bleachers, stretching towards the sky like a church spire. She imagined God rising above the stadium, the way heat rises, smiling down upon the players, clutching the Bat in his soft, wizened hands.

One boyfriend was a poet and he believed that things have souls. Or rather, that human souls inhabit things. For example, my grandmother, he said. She inhabited a porcelain figurine of a cat for seven months. I would leave it on the kitchen table at night and when I woke up it’d be on the windowsill, watching for the postman. Sophia laughed. I’m serious, he said, what I’m trying to say is that maybe your father is in the bat — that your father is the bat. But I don’t even know if my father is dead, said Sophia. Well, he said, there’s only one way to find out: take the bat in yours arms, he said, and hold it like a baby. Sing it a lullaby, spin it around, stroke it three times and say, very, very, softly, “Daddy? Is that you?” He picked the bat off the floor and extended it towards Sophia like a platter filled with gold. Yeah, no, she said, I’m definitely not going to do that.

Actually, she loved the bat. All that stuff about not loving the bat was a lie. Sometimes she really did pick it up and rock it in her arms like a baby. She polished it once a month. She slept with it next to her bed. She did not want the bat to suffer. You are enough, she said to the bat, you are perfect as you are, you magnificent, spectacular bat, you beautiful, beautiful bat, you absolute goddamn marvel of a bat. She wondered if she should take an interest in baseball — for the sake of the bat. One night she put on the game and set the bat down on the couch next to her. When she felt the sadness rising inside her she called her mother. Listen, honey, her mother said. When I feel resentful about your father, I embroider. Because after threading the needle and the split stitch and the backstitch and the mind-numbing tedium of squinting at a piece of fabric for hours I feel so fucking furious that I forget what I was mad about in the first place. That sounds healthy, said Sophia. What happened to that boyfriend of yours, the nice poet? said her mother. He thought dad’s soul was in the bat, said Sophia, so I had to break up with him. Your father isn’t dead, said her mother, with a sigh. He lives in Yonkers, your Aunt Mary saw him last week at the Stew Leonard’s. Sophia was silent. I was going to tell you, her mother said. I was. How’d he look? said Sophia. Bald as an egg, her mother said, with a belly as big as Texas. Aunt Mary’s words, not mine. The fucking bastard.

Most of the time, Sophia was fine. Other times, she’d borrow a friend’s car and drive to the Stew Leonard’s in Yonkers. For one hour she’d sit in the parking lot and then go home. It was fall when she saw him. He was loading groceries into the trunk of an old Honda. He wore a threadbare leather jacket. When he was done, he slammed the trunk shut. Then he looked up. It was only for a second. He squinted into the sun, as if searching for something, his hand shielding his eyes, and then he got in his car and drove away. When she got home, Sophia put the bat in a box and stuck it in the closet. Several years passed. She met a calm, measured man and decided to marry him. Soon after, she was pregnant. Her son turned one and then two and then three and then four, and then he was in elementary school and then middle school and throughout it all Sophia rarely thought of the bat. And when she did, she found it was with a sadness so gentle it was like being caught off guard by a warm breeze. Then the breeze would pass, and life would go on again. One afternoon, she received a letter in the mail. Her father had died in a senior center in Yonkers. He was eighty-three years old. He had left her nothing. Sophia read the letter again and again. Then she went to the basement. The bat was a bit dusty, but otherwise it was the same. Same old wood, same signature, same date. She picked it up, dusted it off, took a few fake swings. Then she assumed batting stance and—just once—swung the bat into the wall as hard as she could. It was enough to leave a small hole in the plaster. She sank onto the floor, looking at the mark she’d made, and she remembered the morning all those years ago when her father had placed a bat into her arms and then walked away. She remembered running down the streets of her neighborhood at twilight, calling his name. She remembered how her mother had wordlessly removed his pictures from the wall. She remembered learning how quiet absence could be, how her house became a chamber of silence. She remembered a summer evening when she was four, her father teaching her how to catch fireflies. She remembered how his hair stood up in the back. She remembered that he smelled of pine. She thought of her son, asleep in his bed, and knew what would happen in the morning. How she would wake him up, hand him the bat and say, “Once upon a time a famous man played a game with this bat. Then he gave it to my grandfather who gave it to my father who gave it to me and now I’m giving it to you. It is a special bat, a valuable bat. My father loved it the only way he could. You can use it or you can sell it or you can keep it or you can throw it away. Do whatever you want with it, but know, no matter what, that it belongs to you.”

Emily Ziffer is a writer and translator living in New Haven, CT. She holds an MFA from Colorado State University and her fiction has been published in Indiana Review. Currently, she studies Russian and Polish art at Yale University. Though she has only played baseball about three times, she is a huge fan of her friend's souvenir Yankees bat.