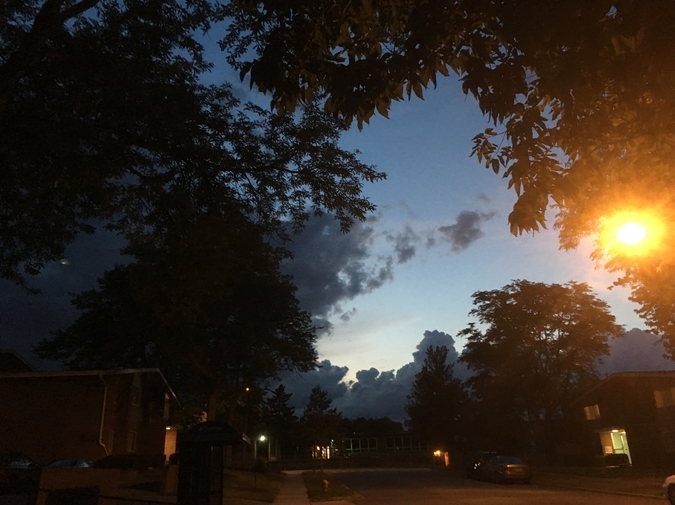 For a month I’d been awakened by a loud chirping in the early morning hours. A cricket? No, I later learned, a tree frog.

The tree frog plants himself in one place, somewhere where a human ear can hear him at 3:40 a.m., and plays his violin. He is a true artist. Before beginning each concert, the little frog knows to tune his instrument. “Plink.” One note, pause. You can imagine the little frog’s head bent down toward the strings, appraising the sound. “Plink plink.” He’s the perfectionist of the amphibian kingdom.

Nature has only given the tree frog one chord, but he plays it with passion. He knows what his gift is and he milks it. His mission in his short life is to make his music heard. He knows to play his music when we’re groggy and should be asleep so that it works its way into our subconscious, as if reminding us of something basic to our nature that we’ve tried to ignore. He’s a psychologist, a marketing genius who knows how to promote his product: a clear, focused message; keep it simple; broadcast it everywhere. Very successful at what he does.

If the frog is lucky, he will find his way into your home. He will plant himself somewhere he can’t be seen and project his chord across the room like a ventriloquist. You will never find him. You will never know the source of the music.

Yet I was determined to locate this artist so intent on making his gift known to me. I had suffered through too many baleful days, dreading the night. Once awakened, I was seldom able to fall back to sleep. I began by looking under my bed. Nothing. Surely he would have jumped as I shuffled aside a box filled with sheets of odd-denominated stamps, dust-covered typing paper, manila envelopes littered with roach droppings, and a dented, unopened box of condoms.

I looked in my closet. Perhaps he’d pocketed himself in one of several sport coats I rarely wore—one a gift from a girlfriend who’d hoped someday to see me wearing it at a podium, sharing my pearls. Or in the pile of athletic shoes I couldn’t believe had no more use, worn out before their time, their tongues sagging and mute. Where could he be? My nightstand? I pulled out a half-finished, chocolate-stained manuscript from atop the books in the stand’s interior. I glanced at a photocopied poem about a pigeon too fat to fly, put it aside, and began removing my books. Perhaps my short stack of Hemingways provided a dusty, dimly lit place from which to perform.

Yet the breeps continued nightly like clockwork, as if waking me up to remind me of something I’d buried that refused to stay dead. They might as well have been coming from inside my skull.

The next day I explored the area outside my window, an empty space between me and the people next to me. I looked around on the ground, turned over a fallen branch, loose leaves. I searched the never-tiring air conditioner, checked the vents. I climbed atop the air conditioner and inspected the rain gutter along the roof. Nothing but nature’s debris, stuff no one would see but me. The air conditioner shut off with a clunk, a few parting ticks. Then nothing but an annoying silence and an awareness of my own breathing as I stood there above the earth. That night the tree frog would be creating. I wouldn’t.

At two thirty-five the next morning: “Bbbrrreee-EEEPPP! BbbrrreeeEEEPPP!” Judging from the sound, he hadn’t moved from the spot where I’d heard him every night for a month. Evidently he never moves, never sleeps, never eats. He lives for art, the only sustenance his soul requires. What need does the tree frog have for fellow creatures, for hitting the bars late at night in search of company, conversation, or something more concrete? Or hours of late-night TV, glass after glass of whiskey and water on the rocks. Or days when not hung over of exercising to the point of mindlessness, seeking a Zen exhaustion.

Bleary-eyed, foggy-headed, I knelt on my bed and shined my flashlight through the blinds. I saw nothing, I heard nothing. All was silence. Nothing, nothing, then something. A sudden flicker of movement, a single, questioning, “Breep?”

Betrayed by his obsession. He couldn’t stop making his music.

The little artist was clinging to my neighbor’s wooden fence at eye level, just a few feet from me—thumb-length body, smooth, rubber-like skin, nearly opaque, with large black eyes popping out the sides of his head. In hindsight I imagine him breathing hard, his heart pounding.

Outside, a halo of humidity circled the streetlight. I tightened my housecoat and walked around to the back of the house. My slippers grew damp as I stepped lightly in the rich-smelling soil, cupping the flashlight in my hands to hide most of the light. I had neighbors, though I could not say who they were.

There he was, pop-eyed, nearly opaque, rubber, etcetera.

I made the little frog leave his perch. I made the artist leap to the ground where he landed before my slipper like a martyr on the soft, leaf-covered earth.

Rob Reynolds's comic literary novel Wire Mother Monkey Baby was published by Outpost19 in 2017. His stories have appeared in the Tampa Review, Kennesaw Review, Mad Hatter’s Review, flashquake, Vestal Review, and Eunoia Review, and have been honored by the Austin Chronicle. “What You Can Learn in a Bar” was anthologized in Ooligan Press’s You Have Time for This: Contemporary American Short-Short Stories. He's a former Contributing Associate and Contributing Editor of the Harvard Review and the Boston Book Review.

"The Artist" is an excerpt from his memoir, Memories of Underdevelopment, which is currently seeking a publisher or representation.

In what seems like a previous life, he taught English for four years at Tom Petty’s alma mater, Gainesville High School in Florida. He's lived in Austin, Texas, since 1994.