The Art of Music Fiction

an interview with George Clarke, by Aaron Burch 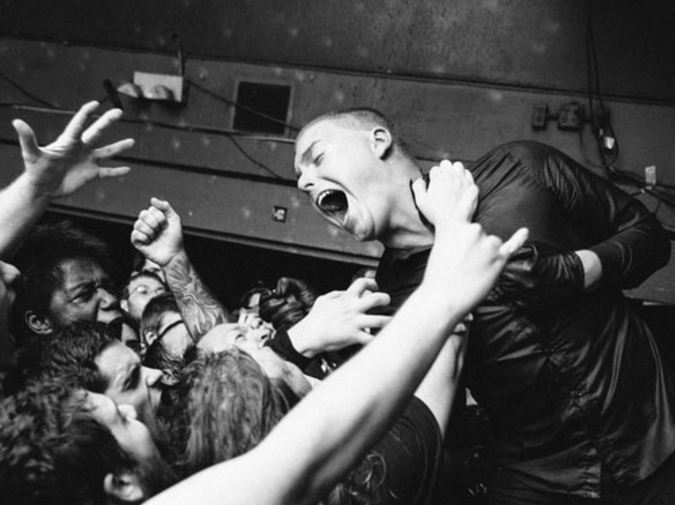 Earlier this year, Tobias Carroll interviewed me and asked, “Your previous book, How to Predict the Weather, had a blurb from Botch/Narrows vocalist Dave Verellen. Has there been any hardcore that’s been impressing you lately?” And I felt bad because I didn’t really have an answer. I haven’t listened to too much hardcore in a while, haven’t really discovered much new music, outside of hip-hop, in a while. I’ve totally become that old guy whose music tastes froze ten years ago. And so I said as much, and a handful of friends actually read that and sent suggestions, “Have you heard…?” questions. The one repeated band was Deafheaven. “Not really hardcore, but kinda hardcore-related,” they said. I’d heard the name a few times, but being the cranky old man I am that still only listens to, like, Veruca Salt on repeat, I just avoided checking them out. But here were multiple recommendations at once, included on Spotify playlists and everything. And I loved it. I got Sunbather, listened to it on repeat. It was loud and soft, screamy and complex. (It didn’t hurt that they shared a record label, Sargent House, with some of the newer bands I did still know, Helms Alee and Russian Circles, because they were in various ways related to old bands I liked.)

When I saw the lineup for Pygmalion, Deafheaven was the band that stood out, the one I was most immediately most excited for. When Caleb said George Clarke was also interested in reading as a part of the Lit element of the fest, and would I maybe want read with him, my excitement doubled, my worlds and interests seeming to collide. I got to share a few emails with George, back and forth in between stops on the tour that is now bringing them to Champaign-Urbana, and ask him about reading and writing, his thoughts and ideas on lyrics vs. poetry, writing for the page vs. performance, and inspiration, drawing music ideas from books and reading and vice versa.

Q: I thought we'd start broad -- could you talk a little bit about what you see as the differences, maybe the advantages and dis-, maybe what appeals to you about one v. the other, etc., between writing for music (your lyrics) v. the page? Is there a difference?

George Clarke: The once thought disadvantage that came with writing for music as opposed to the page has actually, in time, become an advantage. That being, editing. I've always written lyrics separate from music, but when it came to lyric placement, I would often have to edit down the words in order to fit vocal patterns in the song. It was frustrating and I hated it. Now, on the other hand, when I write something for the page, I re-read it and find it longwinded and dragging. I think being forced to edit in lyrical writing has improved my page writing as I've been able to 'cut the fat' off what I was doing, create better urgency, etc. So whereas I originally hated to edit, now I go back and re-edit constantly. I talk how I type and that usually means starting somewhere, continuing on, trailing until I can't remember what my original point even was. I'm probably doing that now. So yeah, I'm happy. I think that lyrical formatting has improved my page work.

Q: I can't help but wonder, when I think about you doing a reading, that, when sung, one of the more notable aspects of Deafheaven is your style of vocals, and the often... less than clarity of them. I really like the Deafheaven vocals, and one of my joys of listening to hardcore, especially when younger, was going to shows and knowing the lyrics, like a kind of badge that I'd worked for them, that I didn't just know them because I'd easily picked them up, like a Pearl Jam chorus or whatever. And I wonder if that clarity is connected to your desire to also show them off on the page, or at a reading, or if the two are completely unconnected.

With my vocal style, it's weird. For the music itself, the lyrics are almost entirely unimportant, but for the greater understand of Deafheaven and what it is we try to accomplish on an emotional level, the lyrics are the most important. Musically, my vocals act as an additive to build intensity. They present themselves almost as another instrument to build the pace and urgency of the song as it ramps up. I think people who enjoy what we do musically can do so without knowing lyrics. However, for those who enjoy the music enough to where they want to investigate the band, we always have lyrics readily available. I think that taking that extra step, taking that extra time, and really involving yourself with the record can only pay off, especially if you already like what's being done musically. It's what creates the deeper connection. When people do that and respond at shows, I love it. It elevates the whole experience tremendously. Like you said, and something that I can absolutely agree with, it's a badge. It's an investment that leads to reciprocation in the live medium and when that happens, the experiences changes altogether.

Q: Circling back a bit, I've been thinking a lot lately about cross-genre inspirations and influences, both specifically and in larger sense. I recently listened a little closer to a song I'd been listening to for months and realized it had been inspired by (based on?) this amazing Harry Crews novel about bodybuilding, BODY. And it made me love and appreciate the song on another level. And, conversely, I often grab lines from favorite songs and plop them down in the middle of stories, usually to help myself, when I want to make some kind of connection between themes but not be so explicit about it. Which led me to thinking about you, thinking about these different modes of writing, and I also saw that interview with you guys, done by that 13-year-old, and he asked you about Bret Easton Ellis as an inspiration. And I wonder if you can't speak a bit about that kind of cross-pollination of genre influences, and also maybe specifically about being inspired by literature in music?

There is definitely a cross pollination of influences between writers who take to the page and those who do it to accompany music, but then again, for myself, the two have become synonymous with one another. I write apart from music, but edit to form fit a song, so I'm never really consciously thinking of what I'm doing as lyrics. They only become that way once they're placed accordingly. Because of that, I'm more influenced by page writers and poets. There are a lot of musicians who write specifically for songs whose words I admire and love, but on a regular day to day, I don't think that influences me much.

In regards to that interview, though I do like a lot of Easton Ellis' work, his writing style itself isn't a huge influence, but I like his themes a lot. When I was detailing Sunbather, a lot of things to do with wealth and self destruction shone through because I had felt some kinship from Less Than Zero. When it comes to actual style influence, a lot of what was written in that time period specifically was influenced by Milan Kundera or Andre Breton or Pablo Neruda. A lot of what I wrote on that album was my take on surrealist writing. Well, in a sense. Basically I wrote about personal matters, but included references that I would only understand so to read it from an outside perspective would probably result in some sort of surrealist confusion; or rather, what I wanted, open interpretation.

The song "Sunbather" specifically was my best jab at that.

Final Q: This is a super cheesy and lame final question, but... why should people come to the reading?

Honestly, I don't know why people should check out the reading. I don't find myself particularly interesting, but if someone is a fan of the band already or maybe looking to see what the band is all about, hopefully I can shed some light into the deeper, more emotional aspects of what we do. What's written will always be the direct line to that.

(This interview is being co-published here on Hobart and with Smile Politely. Aaron & George are reading together in Champaign, IL on Sunday, 9/28, as part of the Pygmalion Festival.)