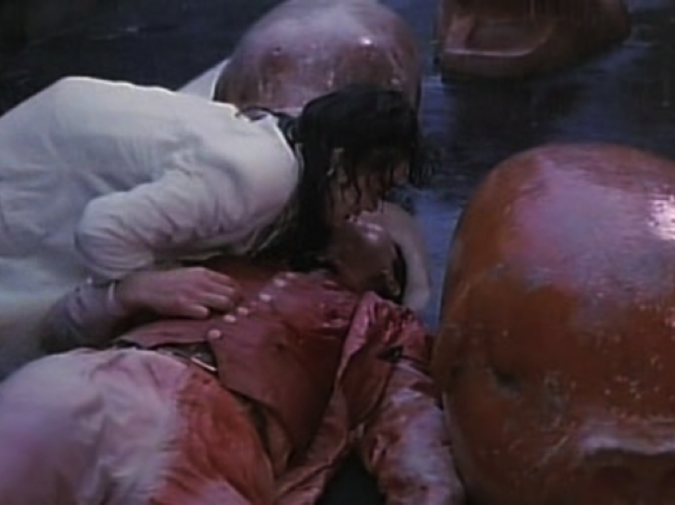 It was getting dark outside as me and Naoki walked down the paved footpath of my West Shinjuku neighborhood to the subway. It was rainy, and there were concrete hippos and pigs, and other rusted playground equipment laid out in clusters all along the narrow street. I’d never seen children playing there, just people like us walking home, or to the station.

Naoki climbed the stairs of a short red slide and came down on his feet like a surfer. He made a Wheeeeeeeeee sound as he slid, then smacked the ground hard, dropping his cigarette into a puddle.

“Have you seen the movie Tampopo?” I asked.

“Tampopo? Like Dandelion? He patted his jacket down for another cigarette.

“No. I haven’t seen it. Sounds familiar.”

“It’s pretty famous. They filmed the last scene on this street.”

“Yeah,” I said, and pointed up the street. “Almost right here where we’re standing.”

Naoki looked around and said “No shit.”

“At the very end a guy gets shot.” I kind of stumbled to imitate the character being shot and acted shot, clutched my stomach and tripped over a hippopotamus.

“I think it was in 1985, two years after I was born. You gotta watch it. This street still looks exactly the same. Maybe they repainted the animals, but that’s it.”

Naoki nodded. He was thinking about it, or pretending to.

“It was raining in the scene too,” I said, looking up.

We started walking again and I jumped on top of another hippo. It was the color of my t-shirt. Powder blue. I lifted my arms and flexed. “I wish I were a real-life prize fighter or a pro-wrestler or something for the love of christ,” I said.

Then I jumped off the hippo towards Naoki. I yelled and came down on his shoulder with my elbow. He laughed and turned his weight, tossing me like a sack of shit. I fell into the wet street and scraped my arm. Now I was bleeding. It dripped down my arm and it dripped on the black asphalt. Naoki said said “oh shit,” and tried to help me. I pretended to fall again, right between the powder blue hippo and the powder blue pig. I closed my eyes and made a lame death rattle noise.