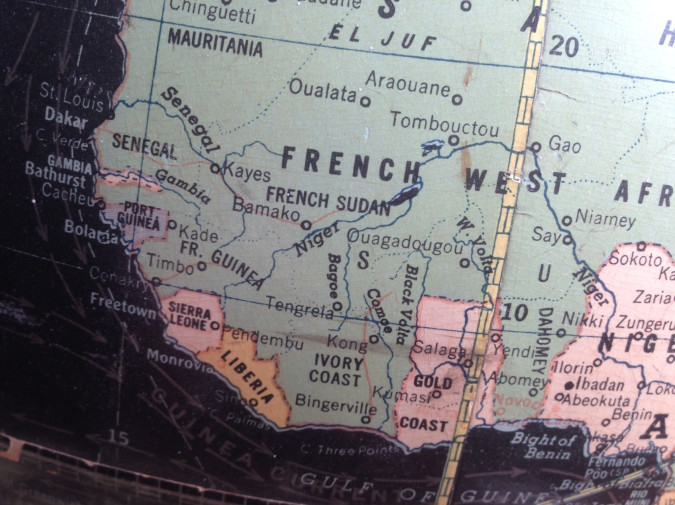 I’m supposed to be on my way to Timbuktu, not stuck here, listening to a man sing about the place.

Listen to music. Talk in circles. Drink like fish. This is what we do, the Duke and me.

Duke Mohammed Ian. He fell in love with a Senegalese on a package vacation in The Gambia. Chucked his old life in England. Returned to marry her, make a fresh start. Unfortunately, he failed to anticipate the size of her ever-extending family, its boundless appetites. Food. Drinks. Consumer goods. You name it. There’s even chatter about forcing his conversion to Islam. It's hard to tell what’s disappearing faster: Ian’s money or Ian’s sanity.

For me, The Gambia is supposed to be the briefest of stops: a launching pad for grander ambitions. My goal is to travel overland and “take” the ancient city of Timbuktu, maybe the way Leonard Cohen sang of taking Manhattan and Berlin. I want it under my belt. I want to conquer something.

Only I didn’t anticipate the gut check at Arrivals.

When I stepped off the plane into sweltering heat and enveloping blackness, I realized that I’d been raised in the coldest, whitest place on earth. Night was falling, Africans swarming, chloroquine-resistant mosquitoes circling for the kill. I was young and alone, with nowhere to stay. I felt desperate to go home. The sooner the better.

Somehow, fate delivered the newcomer—wide-eyed and terrified—to the wise old hand. Ian became my salvation, his home providing the cradle where my confidence and courage can steadily grow. In addition to his experience, drawn from a childhood in Ghana, Ian shares many things with me, including music. It plays constantly on a CD/cassette player in the living room where he and I do what we do best.

Touré sings in multiple languages, none of them English, none of which I understand. But his voice and the exotic instruments—they speak to me all the same. No role for the brain. No need for Google Translate. It’s the kind of music that travels straight from greedy ear to hungry soul.

After countless spins of this album, Timbuktu ceases to be just a dot on a map, a box to be ticked, a city to be taken. The mission to reach this fabled destination attains a higher purpose: it’s a quest to see, hear, touch, taste and smell the spiritual source of Touré’s beautiful and hypnotic music. Siren songs. I have to answer.

Only, not quite yet.

Ian has rescued me, so I’m sticking around to see if I can help Ian rescue himself. Every day, we discuss his predicament until we’re drunk and exhausted. The ceiling fan spins. Mosquitoes buzz. Music lives.

For a while, Ian and I broaden our musical selection. In a reprieve for both his mental health and personal finances, he discovers that one of my mixtapes will empty his house of everyone but us. Until, inevitably, it doesn’t.

“I think we’ve developed some Bob Dylan-resistant Africans,” I suggest.

“We need something with less rhythm,” Ian says. “Leonard Cohen?”

I have no Leonard Cohen.

Soon enough, the Duke’s disloyal subjects are re-storming the castle, and his daily drinking is starting earlier and earlier. I worry about my friend, but I welcome the return of Talking Timbuktu. I also realize the time for talking is almost done.