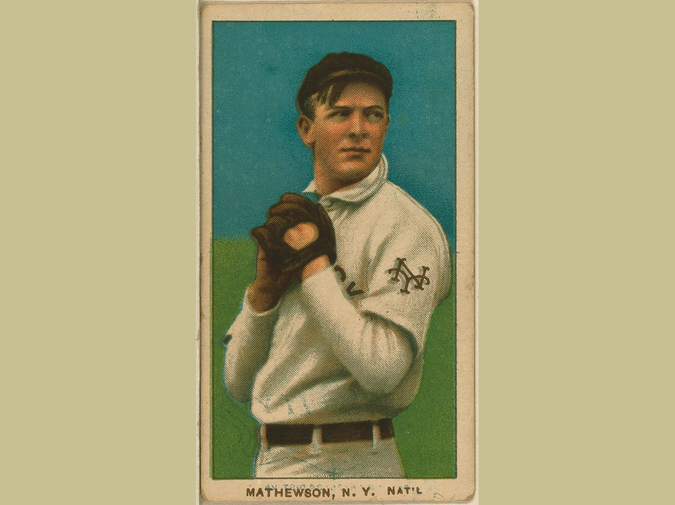 The first year after my dad had to leave I didn’t visit him much. He’d moved into the back room of this old house that also served as his office, about a thirty-minute drive from where I lived with my mom. I was thirteen. I rarely left the safety of my room and I didn’t have much of a relationship with my dad outside of playing or watching baseball, so it seemed like a “nightmare of clichés” to spend even ten strained minutes in a car with him, let alone a whole day.

I was a shitty son. When I turned fourteen I started to realize this and my way of correcting things with my dad was to ask for a job. He jumped at the opportunity and hired me as a sort of secretary/grunt-worker. The first part of the job was to enter numbers and names into the computer and it was awful and I hated it and that’s all I really remember. But the second part of the job was to go through my dad’s extensive baseball memorabilia collection he had stashed away in the garage. I’d dig it out, move it around. Then I’d take pictures with his new camera he’d bought but had no idea how to use and then put the pictures up on e-bay with little descriptions for the item. That was the part I liked, the part that served as an excuse to spend more time with my dad.

The first thing I remember was the T206 cards. The T206 cards were these extremely rare little cards that came in cigarette packs, sold from 1909 to 1911. I guess that sounds really weird now but back then—and I have no real evidence to support this—kids would chain smoke and play street dice in alleyways and then beat each other up over ownership of these cards because of how great they were. They were beautiful too. Something about the color, or the way they were printed made them look holy. To this day the most expensive baseball card in existence is from the T206 collection. The elusive Honus Wagner card. My dad always wanted it but there were only about 50 to 200 that were distributed to the public. As my dad told it, Mr. Wagner had a problem with his likeness being used to sell cigarettes to nine-year-old kids, so he had them pulled from shelves all over America. Either that was true or my dad was using the opportunity to remind me that if I wanted to be a Hall of Famer like Honus Wagner, I shouldn’t even think about smoking. He could be like that. And I think he always knew. He knew if I wasn’t playing baseball I’d get in to trouble. He could be like that too, prophetic.

After the T206’s were all photographed I moved on to the signed baseballs and the unopened cartons of cards. They were much easier. The T206’s were pieces of art and needed to have proper lighting and focus, but everything else took just a few minutes. I was almost finished, months of work put into it all, when my dad walked in and asked if I wanted anything. It was a weird question. At first I thought he meant food, but he never asked what I wanted. He’d just give me what he classified as healthy, what he thought major league ball-players ate. So I asked him what he meant.

“Out of all this stuff,” he said. “Which thing do you want?”

I knew exactly what I wanted, but instead blurted out something vague, something only a kid would say to appear unexcitable.

“I don’t know, maybe one of the tiny cards that haven’t sold?”

I couldn’t believe it. I didn’t really get full-on child-like happy back then but in that moment I was happy. The Christy Mathewson was the most beautiful of all. It didn’t matter that it was worth nearly eight-hundred dollars. I loved the card itself and I loved that my dad would trust it in my hands. I’d never felt so attached to a physical thing (except for my Stripes DVD, cause of the boobs, you see) in all my life. It felt like a rite of passage. I was bonding with my dad. I was Kevin Costner at the end of Field of Dreams.

But when I moved away from home at nineteen I didn’t bring the card. I left it with my dad, who I left behind too. After years of drinking and ten or so failed attempts at sobriety I was desperate and broke. I had that sadness where you feel like a little kid and all you want is for someone to be nice to you. So I called my dad. He gave me a job, again, and I moved back home to Arizona. We both knew I’d fuck it up but my dad didn’t care, didn’t even flinch. At twenty-four I moved in with him. The house was nicer, newer, and we were sharing a wall for the first time in eleven years, but not much had changed. I was still a bad son. I had this plan that I’d be there two months, at the most, and if my dad tried anything sneaky to get me to stay I’d run so fast he’d be reminded of my playing days.

Walking in to my dad’s house I saw the mass amounts of books and movies about baseball and the Vietnam war, just like the old house, and then I saw the hallway with all the pictures of me and my brothers and my nephews. A little further and I saw my bedroom. My dad had set me up as best he could, years ago, in case I ever needed a place to sleep. He’d kept some old clothes that my mom had given to him when she moved out of my childhood home. And my trophies and my DVD collection had been arranged on the shelves. But I didn’t see the T206 card. Didn’t think to look. I’d forgotten about it. Even a year into living there it still had never crossed my mind.

Then one day I was helping my dad move this old mattress into the garage and I saw one of the unopened baseball card cartons. I remembered photographing one just like it and then I thought of old Christy.

And so I guess there’s a lesson in there somewhere.

T.J. Larkey lives in the desert, AZ. He works as a process server and tweets @tjlarkey