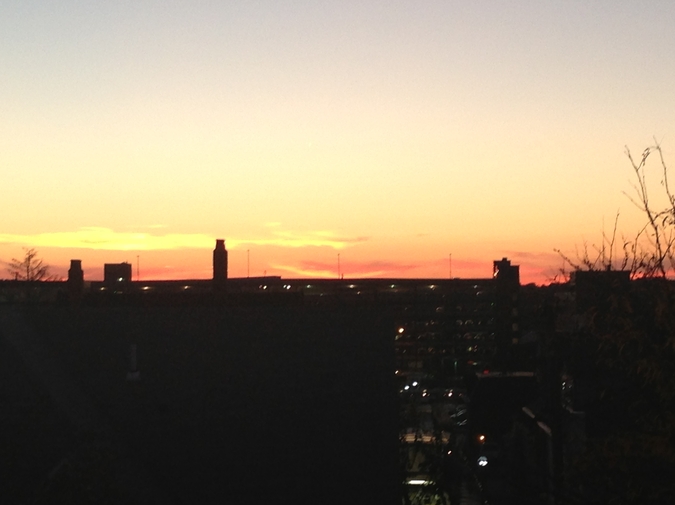 You are a diagnostician, alert for symptoms: ridged fingernails, yellow eye-whites, swollen knuckles, broken capillaries. You are an experienced triage nurse, categorizing levels of amissness. Nevertheless, you are still surprised to discover new kinds of damage.

Dating wasn’t like this twenty-five, thirty-five years ago. Then, almost everyone had the knees and teeth of their youth. Now stomach and esophageal linings have eroded; skin and hair have developed eccentricities. Would you mind sitting on my right – I’m deaf as a stone in my left ear.

The usher blocks the entrance to the theater #4. You and the woman stand with your candy and sodas waiting for him to relent.

“Really?” you reply. These are early days in your new dating life. You have not yet grown weary-slash-skeptical of such admissions: breakdowns, allergies, felonies, estranged children, ruined credit ratings.

“Sometimes when I’m sitting in a partner’s meeting I get a flash of remembering what it felt like. To have something there. It’s like the tail was more me than the rest of me. What would that have been like, I wonder, to be a human with a tail?”

You think that mostly it would be in the way – you don’t live in the trees. But you’re not sure if you’re supposed to go along with this.

She asks you to hold her Coke so she can use the restroom.

You appreciate how refreshingly still and quiet she is throughout the movie.  She weeps at the end, but discreetly, and the tears quickly pass. However, once you’re seated at the café she goes on and on about all the trees that are dying in her neighborhood and her doubtful investments. You berate yourself for lack of empathy. She’s a troubled woman. The mores of the situation require that you listen with interest, but yet your attention drifts like a dying helium balloon. At the back of the café an espresso machine shrieks. An ice cube explodes in your water glass.

Parts have been excised. Bits mostly – unsightly benign bits and nasty cancerous and pre-cancerous bits. Also, malfunctioning organs that have been deemed by experts to be of no further use.

His hands are erupting in eczema. He caresses the top of his left hand with the fingers of his right which you can see is in slightly worse shape: tomato-red scaly fissures.  You study the menu but you can still see the rhythmic back and forth of his forearm.

“Their curries are excellent,” he informs you.

“Would you recommend the green or the red?”

“I’d give the green a slight edge.”

The discussion turns to movies, dog-walking parks. His voice is eager, though you know you are not all that interesting. You wish he would stop stroking his hand. Little bits of dead skin tumble from his hand to the red tablecloth. Scurf.

“I found a dead sparrow in my yard a few days ago,” you say. “While I was walking S.  I scooped it up in the dog-poo bag – I didn’t want S. to eat it. I held the bag in my palm but it didn’t seem to weigh anything at all.”

He nods, his chapped lips pursing. As if he knows what you’re really saying: I can never let you touch me with those hands. Or perhaps he’s simply disappointed in your conversational skills. Dead birds! – and the waitress now strolling to the table with your curries.

You try to meet his eyes, but they are too intense, so you focus your attention on transporting forkfuls of food to your mouth (you don’t want sauce dripping on your best jeans). The green curry is indeed delicious but you have difficulty swallowing. Even the skin on his palms is dry and puckered. I am not a nice person, you think, but that doesn’t stop you from wishing that time would drastically accelerate.

“I think this went well,” he says as he slips his credit card into the folder.  Without warning he reaches across the table – his hand moving toward yours -- and he brushes his fingertips across the top of your hand. And he is the one who shudders, as if your healthy skin disgusts him.

An alarm goes off on her cell phone. “Pardon me,” she exclaims, face flushing. She removes a plastic pill dispenser from her purse, a green container labeled Wednesday.  She dumps the PM section onto her palm – two tablets and three capsules. One of them you think you recognize, the white double-scored blunt rectangle of generic Buspar.

“I can’t remember,” she says, looking up. “You’re not the one who’s into NASCAR are you?”

“I know I’m no prize,” he admits. Only fifty-six but already equipped with a glass eye, fused vertebrae, a knee replacement, and a pacemaker.

Somehow you’re surprised that even in this small, provincial city plenty of people get work done.  Eyelids and hairlines have been revised. Wrinkled skin, sagging skin, and discolored skin have been cosmetically addressed. You look at a face and can’t help imagining the younger version, the pre-intervention version, and the ever-more-ravaged version to come. It hurts, thinking of all those faces, and you strain to see only what’s in front of you. It hurts, standing beneath the unflattering fluorescent lights of the bowling alley lobby with only your spotted, lined, unameliorated mug to advertise for the glorious being that is you. Is it supposed to hurt like this?

You’d never heard of the restaurant she suggested. It didn’t show up on the internet either. Only twelve steep, narrow steps down from the street, but it feels like an irrevocable distance. What kind of place is this?

Cement walls and floors, unmatched wooden tables and straight-backed wooden chairs. This isn’t atmosphere, this is dark as a fucking cave. She’s late. The votive candles do nothing to alleviate the gloom or the chill. You’re the only patron aside from a couple sitting mutely two tables over.  Ten minutes stretch to fifteen but you feel more suspense than irritation. You don’t necessarily have anywhere better to be. A waiter deposits a carafe of water on the table and, eventually, unwillingly it seems, delivers your drink order.

She doesn’t apologize. She firmly shakes your hand. She shucks a heavy black wool coat over the back of her chair. She’s wearing an expensive-looking crimson sweater and a dark brown knit shawl wrapped snugly around her neck and shoulders. She swirls the wine in your glass and breathes in its aroma.

She asks intelligent questions about your work at the hospital. She laughs at your anecdote about the chief resident’s absentmindedness. She orders a bottle of the cabernet – she doesn’t consult you – but you both start serious work on it. You try to shake off the image of her beakish nose inside your wine glass. Surely menus will appear at some point.

When she starts talking about herself her voice is low and urgent. You notice that the shadows beneath her eyes are the same brown-grey shade as the eyes themselves. She is telling you a story about something her sister did when they were girls. Something about a dare and a cliff above a river. You swallow hard – you think you know where this is going and it’s nowhere good. Her shawl has worked itself loose.

Contraption is the word that comes to mind. A peculiar stainless steel contraption encircles her neck like a collar, though at the front, a curved panel extends down her chest like some kind of truncated shield, a breastplate that doesn’t quite reach her breasts.

She’s no longer speaking. She acknowledges your distraction with a darting glance at the metal thing, which seems both too loose and too low on her neck to be a brace, and is surely too bulky, too heavy to be ornamental – but what do you know about women’s jewelry?

She must know that you haven’t heard the end of her story.

“My sister has Huntington’s. Do you know what that is?”

You hope she doesn’t expect you to know because you’re coming up mostly blank.  It’s a degenerative disease, right?

“I’m thinking of going to Iceland,” she says. “If I can find the right people to take care of my sister.”  She’s giving off a tang of sweat and something else, a metallic syrupy smell. Again, you get the strong feeling you know where this is going.  Last month a woman offered to buy you a ticket to Fiji.

She scoots her chair forward. Maybe the smell is coming from the device. Tabs that look like doubled-over rulers protrude from both sides of the collar and rest firmly on her shoulders.  It must do something.

She is looking through you, behind you. “Does that sound like something you could do?” she asks.

“Stay with my sister.”

When you told the other ER nurses about the woman who wanted you to fly to Fiji for New Year’s you said she was nuts but you were the crazy one, they said, to turn her down.

The device gleams. A bright force in a dark room. “You can think about it,” she says. As if she’d asked if you’d mind giving her a ride home after dinner or taking a look at a rash on her arm. You wonder where she and her sister live. If it’s on a quiet street, if they have nice furniture, good heating.

Maybe she uses the device to control the thoughts of others: she appears to be innocently refilling your wine glass whereas she’s actually exerting some kind of mind control. But you had just the one curious thought about where she lived. That isn’t so strange. The restaurant is freezing and you’re tired of your duplex’s drafts, sharing the space with your slobby cousin – it was just a thought.

You shiver. The back of your shirt is damp with sweat.

“Do you even have a sister?” you ask.

She sighs. She reaches beneath the edge of the silver collar and pulls down a lever that looks like a can opener. She shrugs her shoulders, adjusting the weight of the device. “Sure. I have a sister.”

Valerie Vogrin is the author of the novel Shebang. Her short stories have appeared in print in journals such as Ploughshares, AGNI, and The Los Angeles Review, as well as online at Wigleaf and Bluestem. In 2010 she was awarded a Pushcart Prize. She is prose editor for Sou'wester and teaches at Southern Illinois University Edwardsville.