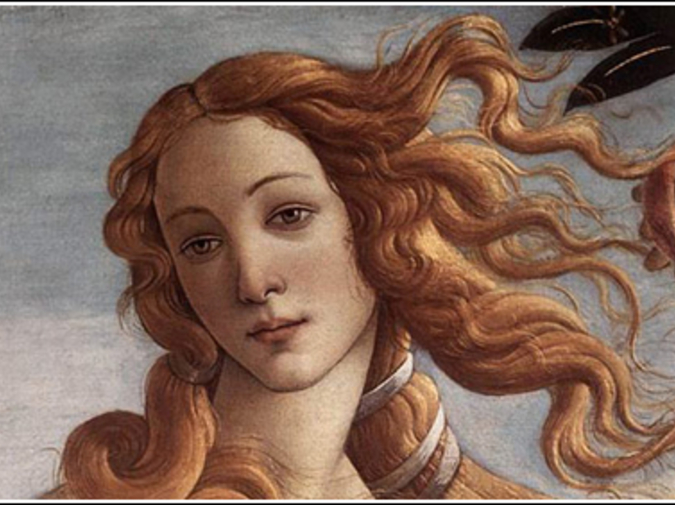 Rueben, since he is on acid and can do things like that, brings Venus right out of the painting that hangs in the bathroom at the organic café. Venus steps out and steps back in, several times, her gaze focused on the sink, her small poof of a belly unmoving. Just her left leg moves out and back.

He wants her to stride out of the portrait completely, to join him naked at a table where they’d drink hot smooth almond tea with soy milk while admiring each others nakedness, openly, before the inevitable kiss. But she is hesitant.

Venus obviously wants to relinquish her captivity, but perhaps it is the knocking on the door (come on, dude, I need to go), that inhibits her. He whispers to her flat ear, “It’s okay, Venus, my sweet. I’ll rescue you.”

But the pounding continues (man, open up) and her left leg steps out and in, sometimes very lengthy, that leg; it almost touches the floor, four feet below the painting. Rueben speaks softly to her. “We’ll swim unclothed in Lake Tahoe. I’ll make it warm for you.” (banging)

Rueben can no longer ignore the thumping as it becomes liquid and with each bash a juicy tomato forms which pushes itself through the key hole and lands on the floor with a splat. “Just wait,” he whispers, not to frighten Venus. “Just wait. She’s coming.” He uses a new technique; his whispered words penetrate the wood, but become shouts on the other side of the door. Why hadn’t he known how to do that before? The acid opened up abilities he’d never thought of; he’d take this one with him; he’d keep it. How handy.

The banging grows loud enough through the tomato door to cause echoing. Even the paint echoes. The tomatoes, now joined with celery stalks, push themselves, squeeze themselves, through the tiny hole in the door knob, piling on the floor up to Rueben’s knees. He pushes them away, wading to the door and presses his thumb on the keyhole to stop the flow. The drumbeat of the carrots, which point their way through like bullets against his flesh, begin to infiltrate his fingers, then his hand, then his arm.

He is helpless to fight the onslaught of organic produce and falls back against the wall where he realizes flawless Venus will soon be smeared. They could drown in the mass together, which is beginning to rot. Slimy spinach caresses his neck and he slashes at his body, pulling out tendrils of green onion. He shoves away the prod of cabbage.

Using each lengthy fiber in his arm, he tugs at her frame. With a “crrrrrrrp” sound, the confining border releases from the yellow wall and as his body turns, he passes by a window.

The window! How did he forget? The soupy window edges won’t allow her cage, so in haste, as watermelons erupt through the sink, he removes sweet Venus from her incarceration and rolls her like a poster. “I’m sorry, V. Just for a few moments.” She squirms, but he holds tightly and crawls out the window, falling onto a crate which digs pointily into his kidney. He does not care. They’re free.

He runs jacketless though the November snow, down to the lake. “Almost there. Almost there.” The cold traces his bare arms and then lifts off, springing away from his invincible body. Venus cries out now and then, but he insists she be kept rolled in for her own safety. When they reach the beach, he slips and bounces back up, then jumps ten feet over a mound of plowed snow using his new extraordinary capabilities.

The snow sparkles individually greet them and he reaches down to hug as many as he can of his brethren flakes. They respond in kind and he smears them on his face, feeling the delightful chill in his skin as the snow reunites with his cells. “We are all one,” the flakes say in unison, in unspoken words, but Rueben hears them and agrees with great joy that he is finally aware of the fusion of all cellular matter.

Knowing Venus won’t want to miss the experience, he buries her in snow just briefly because of her nakedness. The idea grabs hold of his cerebellum and he feels a tug of responsibility. He removes her from the harmony of the enveloping snow, covers her delicately with his shirt and continues bare-chested to the lake.

At the shoreline, he knows he should remove his shoes in case they weigh him down, but he feels the yearning of his shoelaces to swim. How unfair it would be to leave them alone on the beach, unable to splash in the 40 degree water.

He unrolls a grateful Venus who gasps for air. While asking for forgiveness, he strokes her level hair. Wide-eyed, no longer staring at the sink, Venus instead indicates toward the thin early frost auditioning itself on the shore, hoping to become legitimate ice. She forgives him and shimmers, eager to lay on top the water and let her hair swell like a nimbus of magnificent seaweed. He kisses her fixed mouth and she responds with eagerness, but she wants to swim first.

He bounds into the water, trailing Venus next to him like a rectangle kite; her feet bounce on the broken ice and flutter along. Soon, he lies on his back and floats, his bride-to-be next to him. “I never thought I’d get married.”

She responds with a girlish giggle, the laugh of a girl who is just figuring out how to make her man happy.

The cold travels through his arms and lower back, but he holds Venus’s hand tighter and uses his powers to evade the chill until he’s fantastic, warmed by a nonexistent sun, even though his teeth rattle and his skin pimple. “I love this,” he murmurs and she replies clearly, “I love you.”

His eyes follow the pattern of an elaborate constellation; Venus would know its name, but he thinks he’ll ask her later; he does not want to alter their enchantment with speech. He clings to a softened Venus, parts of her have torn away, but a clump remains in his hand: her hand, warm and forgiving.

They float, Venus and Rueben, past trembling, past jaw-chattering, past immobility. The contentment of their unification spreads throughout the waves until the lake buoys them with congratulations.

Stefanie Freele was born and raised in Wisconsin and currently lives in Northern California. Her recent credits include South Dakota Review, Westview, Driftwood, McSweeney's Internet Tendency, Café Irreal, Permafrost, The Binnacle, Thema, and Pebble Lake Review. She will have upcoming work in American Literary Review, Talking River, Lunch Hour Stories, and Quality Women's Fiction. She is an MFA student with the Whidbey Writers Workshop in Washington.