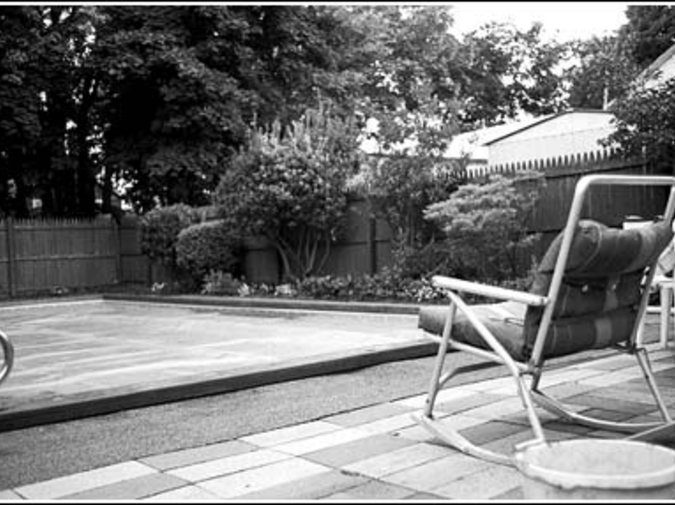 Ernie peered over the dash with a cigarette in his left hand and a can of spiked Pepsi in his right, fingertips grazing the ribbed underbelly of the wheel as he steered. He and Blume were on the Interstate, puttering back to their empty college town after a day of soaking in a creek known for its chilled sinkholes and thick shade. The sun was behind them and traffic was loose. This was the end of summer break and so many strung-together and erasable days, their nights spent at a crowded liquor store where they sold twelve-packs and half-pints and lottery tickets. Ernie laughed as he drove, drank and smoked. They’d eaten some particularly chubby psychedelic mushrooms earlier in the day and only now were the effects starting to wane. Somewhat. Blume was going on about an affair he’d been having with his landlord, a fifty-year-old woman named Fern. Every time he said the word ‘fern’ Ernie flashed the image of a man that looked more than a little like Jesus but with an orange fern for hair.

“They could use a good cleaning,” said Blume. “I mean they’re not black or anything. More like coffee-stained.”

“Her teeth,” Blume said after a long silence. “I’m talking about her teeth.”

“Oh,” said Ernie. “Don’t guess I’ve ever paid too much attention to a woman’s teeth. Matter of fact, I don’t even pay attention to their eyes. The color. I can never remember to do that.”

Ernie finished his drink. He dropped his cigarette in the can and a tiny lasso of smoke hovered the rim. Blume turned to face his open window. It looked like he was emptying something onto the road or gesturing at something, pumping his arms. “Hey man,” said Ernie. “Don’t go littering.”

The suction from Blume’s window lifted a torn page from a road atlas on the floorboard. It spun for a moment before the air current yanked it out to the road. A second page lifted but snagged on Blume’s head, the paper creasing around the side of his face. He crumbled the page and dropped it between his feet. He told Ernie it looked like Kansas. “The state?” asked Ernie.

“Lay off the barrel juice,” said Blume, leaning out the window once more, again doing something with his hands. When he started talking about sex with Fern, becoming increasingly specific about all of it, the green hue of her flesh, the faded tattoos, her burps, Ernie’s thoughts capered elsewhere. A genuine time-bender came over the radio and the bourbon in his veins seemed to sizzle in response. A maudlin expression caught his face and he started thinking about summertime at the pool as a kid. That music, the memory of hot concrete soaking up the chlorinated droplets off his body, the damp shadow of his trunk and limbs fading while his hair dried and his skin drew taut – a break for the lifeguard to cool off and swim a few laps, and that music. But the memory didn’t end there because not only did he see the pool but he saw himself going away from the pool, walking to his house and there was a crowd in his front yard by the street and his mom and his sister, crying, and a powdery blue Ford LTD with a smashed grill and shattered headlight and his dog, Ivan, a Samoyed, and Ivan’s face mangled and torn and white clumps of hair gone yellow and red and his soft chest heaving as he died there in the ditch and that song, the same one, hissing faintly from the door speaker in the LTD and the driver, a minister of all things, a man of GOD – that, that’s what the song meant. Or so Ernie (inhabiting maybe one too many worlds at this particular moment) thought as he steered his car off the interstate, drifted them down to where several cars sat at the bottom of the off-ramp behind a red light.

Ernie eased up to the bumper of a pickup and smiled at his windshield, tears fattening the corners of his eyes. The song was still playing when a lanky bearded man knocked on Ernie’s window. Ernie cranked the window down slowly, his smile widening. There was a glowing cone of orange around the man’s head and when he opened his mouth he sounded almost righteous. Ernie was awed and failed to hear what this Christ-like dude was saying about being flipped off on the interstate, how he wasn’t some weakling to just take such a rude gesture in stride. Ernie was too swept up in the image of the guy to do anything but grow his smile bigger and bigger until the man bent slightly, stepped back and threw his right fist against the hinge of Ernie’s jaw. Something cracked and sizzled in the middle of Ernie’s skull, an internal sound that preceded a deep limpness. Blume grunted, braying with laughter as his legs bucked and his body convulsed. The man walked away and a car horn blasted along with several more. Engines roared and then passed. Blume continued to laugh. The odor of sour creek mud and bourbon was strong in the car, the sunlight facing it now, streaming over the seats, over Ernie and Blume. Ernie whimpered and spit blood into his hands. He wondered if the stink in his car would ever go away, and if its new blend of smells would forever make him think of pain. It took him a long time to form an opinion.

Kilean Kennedy lives in Lexington, Kentucky with his noisy little family. He’s recently developed a talent for blowing out lightbulbs and when not slurring the darkness, he sometimes scribbles away at a breeding stack of unfinished stories, and a novel, or two.