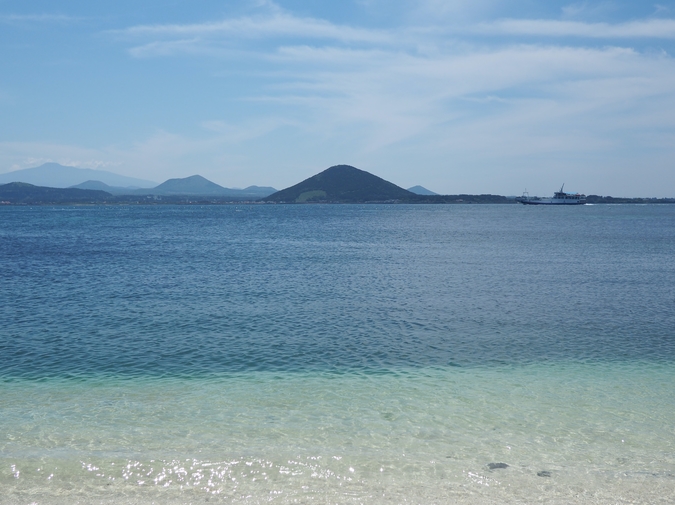 And there you sit, your basalt belly swollen heavy,
a gentle smile playing at your stone lips. To say I
sought you out would be a bald-faced lie, but I will
admit that seeing you standing there all alone on
Hyeopjae Beach, the long tide pulling at the sand around
you, gave me pause. Towering ominous and amused,
your gray bulging eyes the diameter of cymbals,
you waited patiently for me to speak, an outdoor
priest in his open air confessional. Beckoning
with giant fingers, you intimated I should kneel
at the idea of your feet. Tell me your troubles.

When I was a child, my Korean grandmother urged
me to pray to harabeogi, ask the grandfather
for his forgiveness for every sin my child’s heart
harbored. (I’ve since forgiven her this small cruelty.)

In this strange place, newlyweds buy their own hareubangs,
mock-believe you’ll ensure fertility in their bright
futures. Trust me when I say that’s not what I’m after.
I’ve had, in fact, lifetimes enough of all that.

What I need can’t be found in travel brochures, or on
the strangely worded plaques that appear with you on this
honeymoon island. I need the old beliefs, the ones
the fishermen and sailors clung to years ago. No
matter what they had done or who they had injured, you
looked at them with eyes that said beloved, said you are
worthy of my love, of others’ love. I see you.

Sevick is the first place winner of the Split This Rock poetry contest, judged by Naomi Shihab Nye.  She was a finalist for the John Ciardi Prize, The Washington Prize, and the Pleiades Press Editors Prize.  Named a Tennessee Williams Scholar in 2018, she was selected as a 2019 Walter E. Dakin Fellow for the Sewanee Writers’ Conference.  Her work has been nominated for two Pushcart Prizes.

Sevick earned a doctorate in English language and literature from the University of Maryland. She serves as a member of the advisory board for the Furious Flower Black Poetry Center and is a poetry reader for The Los Angeles Review. She is provost and professor of English at Bridgewater College in Virginia, where she teaches Asian American literature.