Stir It Up: James Tate Hill talks about reliving the past, goat cheese, and his new memoir Blind Man's Bluff 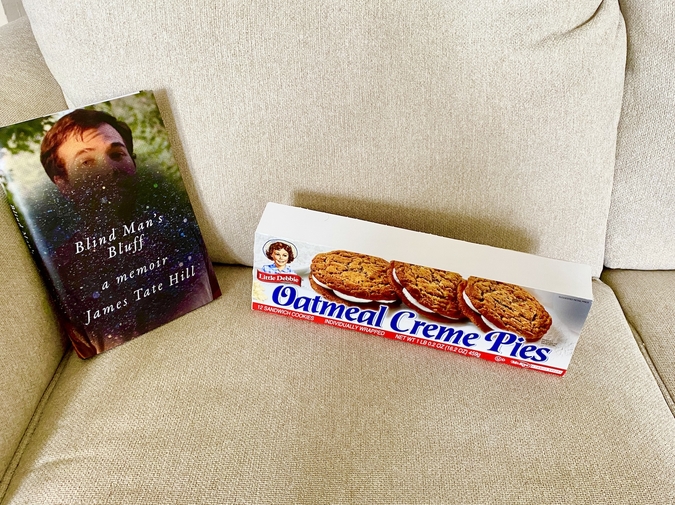 James Tate Hill was one of my first writer follows on Twitter. He seemed funny and I’d heard he won an award or something. For a book! He also had several Best American Essay notables, edited a lit mag I loved, and wrote a column for Lit Hub.

I was, frankly, shocked when he followed me back. I think I had about thirty followers back then, and had published a couple of short freelance essays. I thought it was awfully nice that someone this clever would waste his time on a nobody like me.

But James is both a very good writer and a very good human, and I don’t think I’ve ever heard or read anything he’s said that wasn’t inherently kind. It’s cool to have a writer-hero like that.

Years later I still scroll in search of his tweets, gems like Still thinking about how nobody at the AWP book fair ever sells made-to-order crepes & what a missed opportunity that is. and I shot the serif. But I did not choose the comic sans. I’ve also read both of his books and loved them. He’s a multifaceted writer of prose (and tweets) that I was thrilled to interview about his new memoir “Blind Man’s Bluff” and also about the foods he consumes to support his writing process.

James Tate Hill: Today’s a revision day, so I’m constantly asking myself, “Am I actually hungry or do I simply not want to be writing?” The answer is usually both. I’m also making homemade chicken soup for dinner, which means boiling a whole chicken early in the morning so the stock will be ready to skim off the fat by early evening. And with this wholesome, hand-crafted dinner on the horizon, I am forgiven all my snacking sins throughout the day.

Breakfast was a Trader Joe’s pretzel bagel, which I didn’t even know was a thing prior to an airport pretzel bagel on the way home from AWP in Philly. Today’s was a lot less stale. Lunch was my wife’s leftover Chinese food, which, let’s be honest, given the suboptimal texture of fried rice and General Tso’s Chicken, feels more like a snack than a meal. Between cups of afternoon coffee—again with the not wanting to write—I treated myself to a few miniature chocolate chip cookies, also from Trader Joe’s. Like all Trader Joe’s cookies that come in the plastic tub, they have a low ceiling, but these are among their finer efforts.

Blind Man’s Bluff is a memoir about losing my sight at age sixteen and continuing to pass for sighted with blurry peripheral vision. The charade lasted about fifteen years. Failed relationships, failed novels, near-death experiences. I promise there’s plenty of humor. And pop culture references!

In keeping with this interview’s theme, I’ll add that food plays a supporting role as I lament my college town’s lack of a Taco Bell, subsist on the groceries sold in a convenience store during graduate school, and eventually learn that my not cooking has less to do with blindness than inertia.

If Blind Man’s Bluff were a metaphorical recipe, what would the ingredients be?

Hope and optimism to taste

Half a box/bag of egg noodles or pasta shapes

Rinse the whole chicken and remove those disgusting innards from its cavity. Place it in a large stock pot and fill it with cold water so that the chicken is about two thirds covered in water. Heat until the water boils and reduce heat, simmering for about 45 minutes. Let the water cool off the burner for a bit and remove the chicken from the water, letting it cool enough so you can remove the meat without burning the ever-loving hell out of your fingers. Place the pan in the fridge, which I hope you’ve made room for because a large stock pot takes up a lot of space.

Hours later—until the nasty fatty stuff can be skimmed off the top of the stock, start heating the pot on high, adding the chopped celery and onion. After 10 minutes, add the sliced carrots. After 10 more minutes, add the stock cubes, herbs, and noodles or pasta. When the noodles or pasta are done, add maybe half the chicken that’s been diced into bite-size pieces. Use the rest of the chicken for enchiladas or quesadillas later in the week. Or chicken salad. Whatever. Feel free to add more or less chicken. You’re also going to want to salt and pepper this to taste, which is going to depend heavily on your chosen brand of bouillon cube (I prefer Knor) and whether or not you’ve added more water during the cooking process. Did I not mention that you might want to do that? Sorry. I’m a writer, not a chef.

And most importantly: what do you eat while you write?

It has to be something I can eat while standing up, away from my desk, and something that doesn’t require preparation. Blue corn tortilla chips are a favorite. Olives and pickle spears, because of the high sodium, are helpful in tricking me into thinking I’ve eaten more food than I have. Some cookies with milk straight out of the carton are also an efficient snack. Hey, I’m the only one in the house who drinks the dairy milk.

I have a weakness for pimiento cheese, especially the spicy variety. It has to be thick and not too slimy, the cheese maintaining its texture. Otherwise, no thanks. Done well, though, I’ll happily eat it straight out of the container with a spoon. Okay, my finger.

And as much as I adore cheese in its various forms, I’m not convinced anyone actually likes goat cheese. It tastes like cheese that would come from a goat, which many people are saying it actually is.

I love goat cheese! It’s one of my favorite cheeses! It makes me feel fancy and lyrical. Is this a commentary on your writing style preference, or do you just hate goats (even the really cute fainting ones)?

Ha! The taste does not feel fancy or lyrical to me. Rather, it feels unedited and riddled with typos. But I’m cool with cheese made with sheep’s milk, so maybe I’m okay with certain typos?

Okay, picture Blind Man’s Bluff getting optioned: Who plays you for the show or movie, and what do you think or know their favorite snack is?

Blind Man’s Bluff covers me from age fifteen through my early thirties, and as I told my editor a few months back, I am so out of touch with Hollywood right now that I’m not entirely sure I can name an actor who is currently between those ages. Sad, I know. What can I say? I’m currently rewatching The Wonder Years and WKRP in Cincinnati.

But let’s pretend I have a time machine and can cast an actor when he was the appropriate age(s). Let’s go with a young Jake Gyllenhaal from October Sky, followed by Moonlight Mile Jake Gyllenhaal. And I’d like to think Jake would appreciate a giant tub of jalapeno pimiento cheese from the bagel shop down the street from me.

Who are three writers you love right now and what would you cook for them if you could?

I’m going to answer this by arbitrarily checking the list of books I’ve read in 2022 and naming my three favorites so far. They are, in no order: Razorblade Tears by S.A. Cosby, In Love by Amy Bloom, and Run Toward the Danger by Sarah Polley. If we were all hanging out, I’d assume it’s a party, so the menu would be my annual Oscars feast of bacon-wrapped dates, homemade crab dip, truffle fries with garlic aioli, several cheeses, fruit, and peanut butter bars. I hope no one is vegan.

What’s next for you, in terms of your writing?!

I’m finishing up edits on a speculative novel about child stars set in the malls of the 1980s and 90s.

The setting of this novel has its origins in a short section of Blind Man’s Bluff, actually, where I’m roaming the mall for the first time after losing my sight. The mall was still the mall, but everything was just out of reach, a mystery I’d never solve. In 2022, the once-magical shopping mall is beyond the reach of most of us, dying at the hands of big-box stores and online retailers.

And if memoirs allow us to relive the past, novels give us a chance to change it. I always wished I were a child star, and I always wished I could live in a mall, and this novel explores what happens when both of these wishes come true.