Stir It Up: Food and “The Other Ones” with Dave Housley 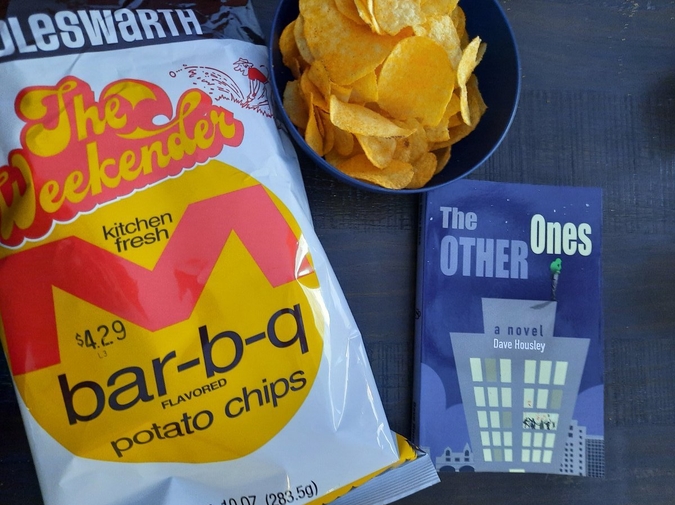 Is it weird to call Dave Housley the “Uncle” of lit mags? He’s that guy, the writer/editor/generally amazing human that everyone in the literary world seems to know. Dave is one of the original Barrelhouse Magazine crew, and he organizes their famous twice-annual conferences and writer camps. He’s also a prolific writer of what’s weird and compelling, both in short and long form. Case in point: go find his Looney Tunes stories. They’re amazing. This one at Cotton Xenomorph is one of my very favorites. Plus, he may have written a few stories for us here at Hobart. I recommend his Baby Hitler series. It’s truly <chef’s kiss>.

Dave’s humor and kindness were what invited me into the literary world as an emerging writer several years ago. The opposite of a gate-keeper, Dave has always kept a seat open at his lit table for friends—old and new. He symbolized “literary” for me and I didn’t realize until later how special that was, how his generous nature wasn’t necessarily the SOP of the rest of this lit business.

So I was particularly grateful to be a part of the Alan Squire Publishing team in supporting and publishing Dave’s new novel The Other Ones, which will be released on January 18th. And it’s even cooler to step back and interview him as a friend and fellow writer.

Plus, Dave understands the importance of snacks.

Hobart: Before we begin: What’s your interview snack plan today?

Dave Housley: I have a coke and some of these Middleswarth Bar-b-q chips that you may recognize from Writer Camp. They’re so good, the only thing we have here in Central PA that’s a legitimate local delicacy that you can’t get in other places.

Okay, tell us about your book!

It’s a novel about a group of people whose co-workers win the lottery. The book follows the people who do not win the lottery over the course of the next year as they shoot off in various (mostly bad) directions. It’s told in short chapters from seven different point of view, including a rather incompetent ghost of a man who jumps off the building in the first chapter and then comes back to haunt the lottery winners. I think it’s dark and also funny and nearly every thing that’s annoyed me over thirty some years of working in offices found its way in there as well. I was really happy that Matt Bell called it a “bighearted office comedy” because that’s really what I was going for.

If The Other Ones was a metaphoric recipe, what would the ingredients be?

I love chili, and one thing I love about it is the mix of flavors – you’ve got hot and also sweet, a base and some flavors kind of dancing around at the edges, all of these ingredients eventually combining to make one cohesive thing. I think all of those things could generally be said about this book: it’s a little dark and hopefully a little funny. It's character driven literary fiction but also very much driven by plot, and part of that plot involves two people who buy guns. It’s realistic but there’s a fair amount of mystery and one of the characters is a ghost. So yeah, I think this book is one of those chilis where you run out of a few things and have had one too many chili-making beers to get back to the grocery store so you improvise.

What if The Other Ones was an actual recipe? Something you love to make and eat, and kinda feels like your book. I know this is still a metaphor, but let’s go with it. Share the recipe!

I don’t know if there’s a recipe that feels like the book to me, but one thing I really miss from the Before Times when we were all working in offices is that we used to have these “Food Fight” competitions in my office, where we’d settle on a theme and everybody would bring in something and we had little prizes that went along with it. It was a fun office thing in the best mode of fun office things, meaning voluntary, organized, not a lot of milling around, and also it was a pot luck lunch. Free food is a huge part of office culture and an essential for any actually good aspect of an actual fun office thing. When we had our Cheese competition I won with an adapted version of this recipe for Shaq’s Mom’s Mac and Cheese:  https://www.today.com/recipes/shaq-s-mom-s-macaroni-cheese-recipe-t139061. I swapped out smoked gouda for the mozzarella. You have to keep the Velveeta so anybody out there looking to outsmart yourself: keep the Velveeta, dummy. So good!

Back to writing, let’s talk CRAFT. What do you stuff in your face while you write?

I wrote almost all of this book while eating! Most of it was written over lunch breaks, back when I was working in the office, so that would have been at Wegman’s and I was probably eating overpriced hot buffet Chinese food. I also wrote a lot at our lovely little hippie bookstore café here in State College, Websters, so that would have been their absolutely delicious veggie chili. I wrote some of this book at the wonderfully weird bar in the Chinese restaurant that used to be down the street from me, so there it would have been potstickers and a Manhattan. Nothing like a ten-dollar Manhattan in a Chinese restaurant in Central Pennsylvania.

I love carbs and I’m trying to lose some pandemic weight right now so I’m trying to stay off them and obviously all I’m thinking about is mashed potatoes and stuffing.

I never got into sushi. I grew up very food-sheltered in the 70s and 80s in a small town in Central Pennsylvania. A Chinese restaurant came into town while I was in high school, but other than that we didn’t have anything in the way of diversity in food. A lot of gravy. Pizza that I didn’t realize wasn’t very good until I went to college. So I understand that the idea of sushi is not in fact gross, but something in my dumb old brain can’t get past it.

Okay seriously, The Other Ones is wild: so funny, but also deeply human and a little achy. Give us a dream cast list for when it’s made into a movie? AND pair each person with what you think their favorite snack is?

Yoder: This is the character who jumps off the roof of the building in the first chapter and comes back as an angry, incompetent ghost to haunt the houses of the lottery winners. I literally pictured Richard Riehl, the “jump to conclusions” guy from Office Space the entire time I was writing the book. Snack: Cheez-its.

Chastain: She’s really the heart of the book, a character who zags and actually leans in to work and is surprised to discover that she finds real value there. Cristin Milioti was so great in the TV adaptation of Made for Love, a show everybody should see. I think she’d be an amazing Chastain.  Snack: almonds.

Russell: He’s the “old guy still working in the office,” who came up with Yoder and had a moment where it felt like life was taking off for him but it never really happened in a way that other people might consider “success.” I think he has to be a kind of sad character but also likeable and sturdy so I’m pulling out the big guns and calling for Frank Sobatka himself, Chris Bauer. Snack: pork rinds.

Robertson:  Very strong Sam Richardson energy here. Robertson is an IT guy who really just wants to be left alone but winds up being pulled into the world of the consultant who is brought in to help the company get over the lottery incident. Snack: Kind bars.

Lawson: This is basically a normal guy who likes his work just fine but winds up quietly questioning his life choices in the wake of the lottery. I think Justin Kirk would be able to bring a smart offbeat energy to this character, who winds up kind of falling into our little literary world. Snack: pretzels.

Gibbons: This is probably my favorite character. He just sits at his desk and thinks about lunch and fantasy football. I love him. I’d love for him to be played by Harvey Guillen from What We Do in the Shadows. Snack: gummi bears.

Craver:  He is in love with Chastain, and tries to get her to quit the office and drive across the country with him. When she refuses he does it anyway and winds up very lonely and very paranoid and going down some dark paths. Kieran Culkin would be perfect. Snack: Bugles.

Chad Stephenson: The whole time I was writing I was picturing ponytailed Tim Robbins from High Fidelity. Snack: Huel.

What’s next for you as a writer? And what are you making for dinner tonight?

I’m about two thirds of the way through a shitty first draft of a kind of Stephen King-ish novel. I’ve never actually read any Stephen King, but I know enough to know I’ve stumbled into that territory.

I’m cooking this chicken thing with mushrooms and cream cheese, kind of an adaptation of a pork loin roulade I made last night and I’m making it mostly because I still have all the ingredients from the roulade with the exception of the pork loin, so we’re having it in chicken form tonight.