Sometimes He Calms the Storm 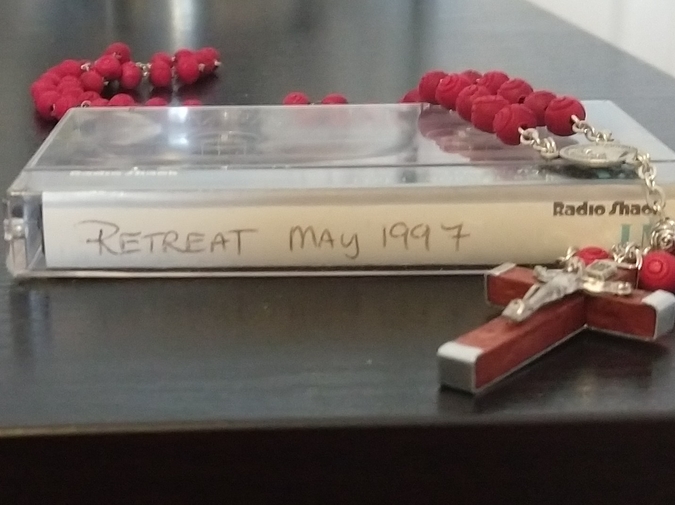 When asked to light the candle to start the next session of the retreat, I couldn’t do it. I was wearing bright purple Press-On Nails, and I couldn’t manage the matches. I was also afraid I’d set one of the nails on fire. I was afraid of a lot of things.

I sat in a small chapel among a group of about fifteen teenagers from my parish. This was our Confirmation retreat. I did not want to be there.

When I’d started Confirmation classes, the teacher asked each of us why we were making the Sacrament. I’d said, “So there won’t be any red tape when I get married.” During a meeting with our pastor before the retreat, he read from a letter written by my teachers: “Jessica approaches the Sacrament from an intellectual, rather than spiritual, point of view.” When he asked me what I thought of that, I shrugged. I knew it was meant as a criticism, but it sounded to me like a compliment.

I believed in God. There was no question about that, but it seemed like that belief didn’t help me much. I was fighting constant battles in my mind. I worried I would sell my soul to the devil. I worried that I would suddenly become violent, injure or even kill someone. I worried that there would be a random shooting at school, or on my street. I worried about hitting a pedestrian with the car I was just learning to drive. And I worried, worried, worried that my mother’s breast cancer would come back. She was in remission for three years by that point but nothing was ever certain with cancer. These thoughts that plagued me started with her diagnosis.

I went to Catholic school. I went to Mass every week. I went to Eucharistic Adoration every Monday night with my aunt and grandmother. I could sing a few songs in Latin. I knew all my prayers, the ones that I turned to over and over to banish the thoughts hunting me down. But the prayers felt less like a talk with God than a magic trick that I repeated over and over until I couldn’t anymore. Some days I managed better than others, but however strong my faith looked from the outside, it felt very weak on the inside. I had to stay intellectual, had to stay detached, or I would be overcome by something I couldn’t dare speak.

I’d been on retreat for almost three days by this point. We’d spent the weekend at a former convent, and the rooms were spartan at best, fluorescent lights and white cinderblock walls with only a crucifix hanging near the door. During the day we’d hear talks given by the teachers and other people running the retreat, some of them adults, others teens like us. I was moved by their personal experiences, but nothing seemed to reach me where I needed. My confirmation class was made up of kids from my neighborhood, some of whom I’d known almost all my life. Our parish didn’t have a consistent youth group, so this weekend was as close as we got. At night, some of the other girls and I would sneak into each other’s rooms and talk until we fell into a brief, exhausted sleep. I remember sing-a-longs of “You Were Meant for Me” and discussions of just what we’d done with boyfriends – “how far is too far” conversations. Except I had no boyfriend, no secrets I could reveal that would make the girls murmur in sympathy. I couldn’t open up to them, to anyone.

Sitting in that chapel where we’d just celebrated Mass, I longed to feel something. We were arranged in a circle on the floor, the candle flickering softly as the lights dimmed. One of the retreat leaders turned on the cassette player and soft Christian music, songs I’d never heard, came on. Then they started handing out the letters.

Some people got multiple letters. Some were clearly drawings from younger siblings, crayon scribbles on bright construction paper. I had no brothers or sisters, so I received a single white envelope. I took my time opening it. I watched as those around me opened theirs. One of my friends started crying. Breathing deeply, I read mine.

My mother had typed my letter on the typewriter. She wrote about how much my parents loved me, how proud they were of me, and that I would succeed in whatever I wanted to do. Then she wrote: “I know life has been scary.”

That tiny acknowledgement flooded me. I’d tried to stay strong for so long that I had made myself believe that my fears were stupid, that I was making something out of nothing. I didn’t cry as I finished reading, but I did close my eyes. I was lucky to have parents who loved me, and who understood me, even when I thought that they didn’t. I recognized that I was holding a precious gift.

The music kept playing. I heard the earnest man sing, “Sometimes He calms the storm/And other times He calms His child.” Something cracked; I kept my eyes shut, bit my lip, and remembered the words of the father who asked Jesus to heal his son: “Lord, I believe; help my unbelief.”