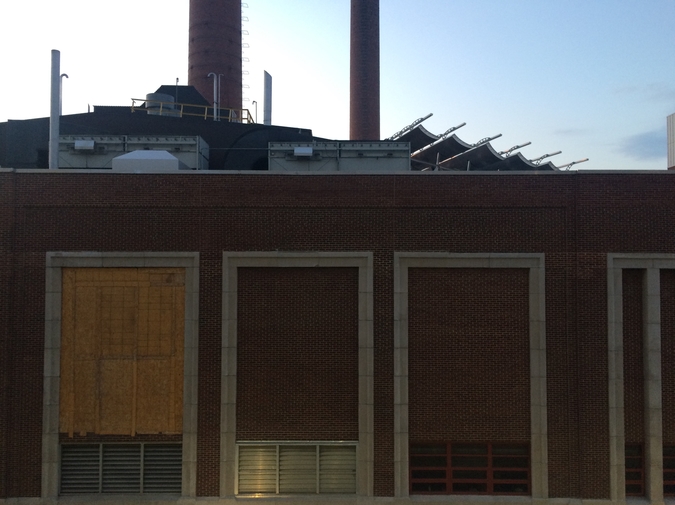 Emily and I are fighting. We call each other out on all our shitty behavior.

She puts on her boots. Tells me to go fuck myself. Slams the door behind her. And I laugh a little as I hear her storm down the stairwell beside our place. Kick the side door of the building open.

Because that’s a move I usually make.

Now being here. Without her. The apartment is quiet. The sounds of the street and the sun come in through the large windows.

God dammit, this has to be one of the nicest days this year.

I lie down on the couch. Cross my hands behind my head. Put my feet up. Close my eyes. Think for a moment.

'She's probably right,' I admit to myself, 'I am a fucking asshole.'

And that’s when I feel this heavy thud. It silences my thoughts. Eats up all the other noise in the world. Floods in through the walls. Gets into my bones.

But I'm strong though. And can tell myself that I imagined it. My senses playing a trick on me. My brain deteriorating with the years.

And the first lie that comes to mind sounds all right to me. So I run with it.

I tell myself that some asshole is out there at the top of ladder. And he must've dropped a sack of flour or rice or side of beef or whatever the fuck that can be dropped and make such a dead sound when it hits the concrete.

But there's this feeling in the air. Like late August humidity. And I'm just shy of having any faith in the story I came up with.

Because all I want to do is keep on lying here. Get back to calling myself a piece of shit for making Emily so mad. But then I hear all this god damned yelling. And my thoughts begin to wander.

The voice is loud. Great fucking anger from the bottom of his soul. I can appreciate that. But if I were out there right now, I'd be off. Hustling in the opposite direction.

Since I'm in my apartment 20 feet above the street I can enjoy his French fury though. I miss most of what he's saying. Only words like chien and tabarnac and tomber and sacrament make it through my ignorant fog.

Which is enough to get me curious.

So I drag my ass off the couch. Slide open the screen of the window. Get up on the edges of my toes. Rest my gut on the ledge. Lean out over the street as far as I can.

I look down Rue Acorn. Along the red brick factory I live in. And at first all I see are parked cars. Shadows. And the slow moving Sunday traffic farther up the block. Along  Rue Saint-Rémi.

You were right, I tell myself with confidence, there are no fucking fallen dogs out here. Just a sack of rice or side of beef. Plain and simple.

But c'mon Stan? What the fuck is that shadow in the middle of the street. Why does it look like it's spreading? Why does it moan?

And I don’t have a chance to get a good look at the thing though. I get distracted. Some kook pops out from behind an old Ford Econoline bordering on becoming a classic.

There's no one else around. And just as I ask myself where else could all the noise be coming from he starts yelling up at one of the lofts closer to Rue Saint-Rémi.

He's in black tear-away pants. His skin is sallow. He starts walking around in a circle. His bandy legs stamping out each step. His fists are clenched.

Something sure got his goat, I laugh. That’s for god damned sure. But I can't place it. His huffing and puffing are a great distraction.

But…fuck? What about that weird shadow. The one in the street?

And this time.  When I look at it. I know for sure it ain't no shadow. It's a shallow breathing dog. A great big fucker. Crumpled up. Broken. Surrounded in a pool of it's own blood.

So it was some kind of accident. The dog darted out into traffic. Maybe it saw a delicious squirrel? There was nothing to be done but hit the brakes.

But I didn't hear any screeched tires?

Or see a car, doors open, idling in the middle of the street.

And the man in the tear-away pants is yelling up at a second storey loft.

That big black dog lying there. Confused. Leaking into the street.

It all comes together.

I push myself back in the window. There's no way I'm gonna make it to the couch. I sit on the floor.

Shit. I wish I'd seen some human lying out there. It'd be easier to swallow. But a dog. Jesus.

How the fuck does that even happen? Hundred pound dogs don’t just jump out the fucking window. They have more sense than that.

And I rub my hands through my hair. Tell myself that it'd be more comforting if they were wet. I open my eyes wide. Blink a couple times. Take a deep breath. Try and think as clear as I can.

I think about Emily. And our fight. And why can't I tell her 'to leave me the fuck alone' with a little finesse. And why do I see red when she stands up for herself?

My own humiliation at having to admit I'm a piece of shit maybe?

I don’t fucking know. And I've never felt for one second like I do. But the dog in the street. Bleeding like that. Maybe I'm beginning to learn some things. Like what's important.

Multiple voices come in the window. And I lose my thoughts. I know I'm going to get up and look. Even though I feel lightheaded, and sick. And I'm certain I don’t have it in me.

Whatever it is that makes watching a dog die in the street easily digestible.

My hands grab the frame of the window. I pull myself up and out. Look back down on things. The man in the tear-away pants is long gone. A crowd has come out. They keep their distance from the dog. Point up at a loft. Mutter in English.

'What should we do?'

'Are you going to pay for that?'

A car drives by slowly. Someone on a bike pulls over. People walk up and stop. Gasp. Hold a hand to their mouths like offended souls in an outdated movie.

I laugh a little to myself. At the crowd. All of us just standing around. No fucking answers for anything. Waiting for some clues to how it happened. Or for this beast to give up the ghost.

You're a lucky one today Stan, I tell myself. You have the luxury of not being involved. And I'm right. I can leave the scene in a second. All I have to do is look up. At the clouds rolling along.

And the sky is that blue that doesn't give a fuck about your skin and just seeps right into your heart. Like a mist. And once it does. Everything seems all right.

Fuck me, I think. When Emily comes home I'm gonna tell her. Before she can even get her boots off. That I'm a fucking idiot. She’ll agree. She'll smile.

But a bunch of gasps reach up from the street. Get a hold of me. And there's nothing I can do.

And I have to call it my infinite luck. Because I look down as the big bitch dog gives her head a shake. Digs deep. Raises herself up on her front legs.

In my head I scream give the fuck up about a thousand times. And when she falls. Face first into concrete soaked in her own blood. It's hard to believe in anything.

Or that my day is going to get any better now.

My eyes well up. And some of the strength I'm proud of is lost. And the crowd down in the street hangs their heads in unison. I like to think they’re praying. But I'm sure they're cursing same as me.

Because we're all one in the knowledge that it’s almost over. That before sun fall someone's going to be digging a shallow grave by the railroad tracks. Or dumping a garbage bag wrapped body into a dumpster.

Which I tell myself is how these things work out.

The dog gives it another shot. Gets up on her front legs again. Steadies herself. And before she even tries it's clear. I can see the failure on her face.

And there have never been more people on the street.

So all it takes to get us together is some loud noise.  A little blood. And a life slipping away. Then we come out of our apartments. Stop our cars.

Pretend to give a shit in droves.

A girl comes around the front of the building. Her moaning. Her weeping. Her theatrics. They get everyone's attention.

She cuts through the crowd. Gets down in the blood. Wraps her arms around the dog's neck. Chokes on her own tears.

I hear every word she says. And am happy someone is finally praying.

'Can someone help me. I need a ride to the vet,' she begs.

It's the quietest the crowd has been.

There's not a goddamned thing I can do.

'How 'bout I call you a cab?' I hear someone suggest.

And the crowd starts getting thinner. People slink off in one's and two's. While she  cries in the street. Soaked in the blood of an old friend.

This is enough for me. Christ. Between the dog and knowing Emily is out there somewhere. Without me. Pissed off. I'm completely exhausted. Sickened.

I slide from the window onto the floor. Give myself a moment. Then get up. Shut the screen and the glass pane too. I don’t want to hear how this ends.

It's a couple hours before Emily gets in. By then I'm sitting on the couch. And I'm not sure if she's already forgiven me. Or if it's the beaten look on my face.

Because she doesn't say a thing. Just walks over and sits down. Puts her skinny little arms around my ribcage. Her head on my chest.

And after that it's not long before we're on the cold tile floor. Naked. Forgetting. At least until tomorrow. When I'll see a blood stain in the street.