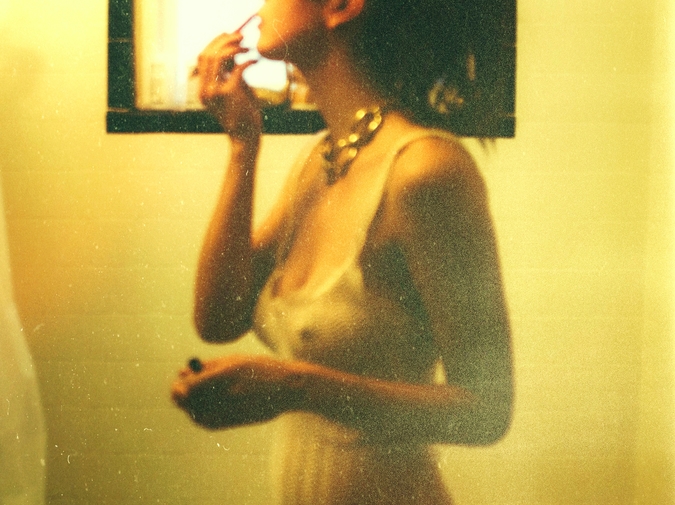 He asked me to describe my labia to him as if he were blind. I sat on my bed peering between my legs, the laptop reflecting my hunched form. “It’s, uh, dark and kind of angry looking––not like the cute pink ones.” I thought of other models, their HD cameras poised above vaginas that reminded me of Polly Pockets: glossy and self-contained. “One of my labia sticks out too far; I think I pulled on it too much when I was a kid?” I clandestinely tabbed over to my account to watch my earnings tick up in five cent increments. Maybe my client was actually blind, or maybe he just enjoyed the language of the flesh––I had stopped asking questions. Out of the corner of my eye, I checked my phone. An unread message from my ex dinged expectantly.

Gabe had been distant since I started working as a webcam model. Technically, we were broken up, but that didn’t mean much: we’d been breaking up since August. The first time was perfect––we sat on my ugly mid-century futon and cried, both acknowledging that something wasn’t working. Three nights later I was curled up in his bed, watching Pippi Longstocking and losing Sour Patch Kids in his sheets. Between break-ups we went to the beach, to the DMV; he met my dad over dinner at a Filipino restaurant. After the meal, my dad asked, didn’t I want to go home with Gabriel? I didn’t. I figured we had time.

Sometime during our relationship, Gabe suggested I try camming. The idea felt foreign, intangible. I imagine he thought it would make me more sexual, a trouble spot in our partnership. I had dismissed the suggestion until, along with most of the country, COVID-19 shut-downs left me unemployed. Part of me was excited to try sex work. On some level, I believed it could nudge me into learning to love myself, and my partner, better. Ironically, it did––something about pretending activated a hunger for intimacy that I hadn’t previously allowed to surface. Sometimes it felt like that hunger would swallow me whole.

On the first day of my streaming career, I asked Gabe to come over to adjust the lighting design of my “set.” I had ordered an unwieldy pair of softboxes off Amazon, and they flooded my bedroom with a fierce, unforgiving “daylight.” Before his eyesight deteriorated, Gabe had been one of the best gaffers in LA, building light plots for celebrity weddings, sold-out rock shows, and, once, for the white party on a private island. He told me about Brad Pitt and Jennifer Aniston’s wedding in Malibu, how when she threw the bouquet, it rebounded off a massive chandelier and landed back in her hands. I wonder if she knew the marriage was doomed then, rearranging the buds and tucking felled sweet peas back into the fold.

“Well this is awful,” he squinted in the fluorescent glare. I tried to clothespin a length of peach-colored fabric over the nylon lens, but it kept slipping off or toppling the flimsy tripod legs. Gabe grudgingly stepped in and pointed the lights at the ceiling, like two giant buttercups reflecting off a chin. I was surprised by his lack of enthusiasm for my project––he had given me his benediction long ago.

Before he left, we had sex in the whitewashed room. It was quick and felt like a punishment. He referred to our congress as “a debt paid,” a callous comment that left me confused and trying to mitigate a profound sense of betrayal.

When I signed off that night, we talked on the phone. He was curious but sullen; said the video quality was terrible. Later he texted what he had held back: that he felt sick, that I was prostituting myself, that he felt like he was watching his daughter on screen. We didn’t talk until, a week later, I showed up at his work-site. I stood at the gate calling his name like a stray dog. He emerged from the building in a hazmat suit, covered in plaster. “I just really wish I had never seen that,” he whispered. Something small but vital broke inside me.

After my genital exposé I showered, rehoming my body. Wrapped in a towel, I got back in bed and opened Gabe’s text. “I’ve started seeing someone,” it read. I stared at the screen, shattered. How do you start seeing someone in a pandemic? I started furiously typing questions, Who is she? Do you love her? Is this because you think I’m a whore now? I discarded each draft as soon as I wrote it.

I cried for two days in bed, ignoring requests to log on for private shows. I cried when I accidentally bought a firm toothbrush from the corner store that made my gums bleed, I cried when I watched an Instagram story of two parrots dancing to a rock anthem. I wanted to be angry: that Gabe had abandoned me when the world was burning, that he had ignored the mandate of social distancing and found a new partner, that he had made me feel like a slut. But I just felt pain, familiar like an old coat worn to the shape of a body.

On the third day of grieving I got in my car and drove across town. Sobbing at traffic lights, I listened to every song that reminded me of Gabe. The February before, we had slow-danced to “Wicked Game'' at the shop I worked at, the fear of falling in love like an extra body in the room. When we noticed patrons at the cafe across the street staring, we staged a fight and a surprise engagement. I slapped him; he got down on one knee; I fake-cried and he spun me around to indicate, yes, we were going to make it. The diners watched, bewildered, and went back to their eggs Benedict.

Halfway through Malibu, I u-turned at an overlook obscured by yellow caution tape. I parked and pretended to take in the view. Glancing over my shoulder for security vehicles, I jumped the fence into the roadside shrubbery, zig-zagging to a cleft in the bluff. I took off my shoes and crab-walked the steep descent. Once down, I threw my backpack on the sand and charged into the water. For a moment my body was my own again.

I had stripped down to my bra and a thong and lay back breathing hard on the sand. On the verandahs of a multi-story beach home, people were watching me. I couldn’t make out their expressions––if they were alarmed at this immodest intruder or only casually curious. A man in his mid-fifties jogged the surf toward me. When he got close enough for eye contact, I readied the only excuse I could think of: Sorry, my heart’s broken, he was your age, had a lazy eye and a hernia and he doesn’t look at me the same way since I started masturbating on camera, but he just nodded and began to deadlift a thick stump of driftwood. I nodded back, thanking him for his silence.

As I dried, the reality of my situation came to me in waves. I was breaking the law during a pandemic to do something, anything, with my body not predicated on a man’s approval. That hit hard. I knew it was possible to have a healthy relationship, to a partner and to sex work, I just wasn’t there yet.

Going back up the cliff was harder. Every loamy toehold crumbled under my weight; outcroppings came away with my hands as I tried to climb. The bluff wasn’t high, but it was jagged and remote. My focus narrowed. For a couple of minutes, I didn’t think to wish for someone to catch my fall––I was on my own. I could survive that.

As my forehead bobbed above the lip of the bluff, I felt the ground give way. One hand clutching a tuft of seagrass, I slammed my cheek against the clifftop, hanging by my head as my feet scrabbled against loose earth. When there is no solid ground, time stretches. Pebbles cut into my temple; I thought about Gabe, I thought about the economy, I thought about resilience. With my last store of strength, I swung my leg over the edge.

Anya Maria Johnson is a multi-genre writer and Los Angeles ex-pat based in Brooklyn. She serves as Assistant Book Editor at [PANK] Books and Fiction Editor at Exposition Review. Previous works can be found in Stone Canoe and Forecast Journal. Anya is an MFA candidate at Sarah Lawrence College. Please don't ask her about her Smeagol impression.