So Your Employer Offered You a Pronoun Button 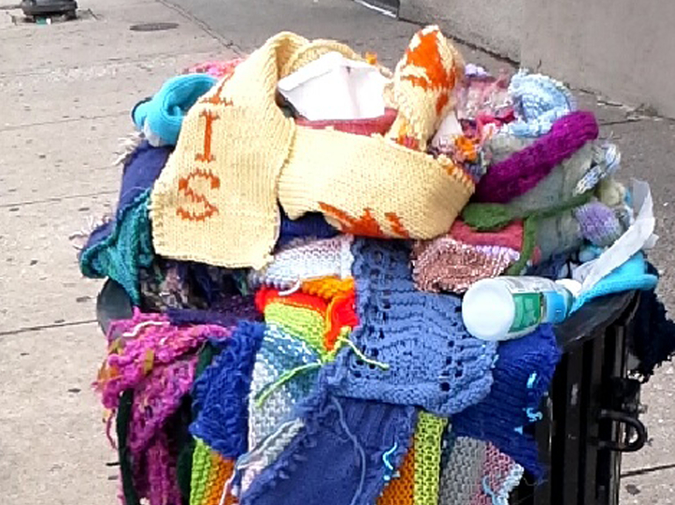 Congratulations! Your employer is an open-minded, inclusive institution that has discovered a method to ensure the comfort of their gender non-conforming employees, and that method is buttons. These buttons were placed in four nondescript manila envelopes marked “She/her,” “He/him,” “They/them,” and “Blank,” and left at the front of the room at the beginning of your meeting. The person in charge of the meeting introduced the buttons, but is not wearing one, so you do not know how to address he/her/them. In fact, not a single person in this room of roughly fifty of your colleagues has taken a button, perhaps because they are in the front of a stadium-style room, and also in front of the projector. Or, perhaps the rest of your cohort are more enlightened than you and wear buttons on their souls.

You look around to see if anyone else has reacted, but everyone is staring into their plates of complimentary cubed cantaloupe.

It is up to you to decide how to best honor this gesture from your employer. Here are a few options.

Recognize that button validation may be the best you can hope for. It may be the epitome of institutional recognition. It may also be fascism. Hard to say, since not a single button has been removed  from its envelope, and the envelopes look exactly as they are supposed to, although the handwriting on the front is perhaps messier than you would like.

Either way, what is clear is that someone has informed the staff that gender exists. Also, that it may not always be identifiable by outward appearance. So they, the well-meaning supporters of diversity, would prefer to not offend us, the diverse, by assigning us an incorrect pronoun. These are buttons of progress! Buttons of change!

Should you quit, in this option, it would not be from despair. You would be going out on a high note.

So you can write down snarky comments about millennials, because it’s the one thing everyone in this room can agree on.

Will you find yourself coordinating your buttons to your outfits, or will you have a permanent rotation?

Are you attracted to other button-wearers? If so, which ones? What if you fell in love with a button-wearer only to discover that the rest of their family hated buttons? Could you live like that, pathetically unpinning your buttons in the car before Thanksgiving dinner with the in-laws, instructing your children not to mention the B-word around Grandma? Would your button-loving friends be welcome at the wedding?

And check out the chick with all the tattoos over there. Isn’t a tattoo the ultimate button?

The tattoo will be ironic, something in the vein of “Leave this space blank.” Or, “I said I’d never get a tattoo.” Maybe you should tattoo your pronouns on your arm so that no one will have to guess, or ask, or ever talk to you. It would still be ironic, as no one has ever questioned your pronouns, since you are cis-gendered and femme enough not to raise eyebrows. Does that mean you are morally obligated to take a button, if only to demonstrate how nothing should be taken for granted? To tattoo the entire complicated history of your gender on your blank button of a body, including the privilege and heartache of being able to pass as straight, the work you have to do to continually out yourself to people who presume otherwise, the difficulty in finding your community and the isolation of not feeling queer enough, all balanced against the fact that you’ve also been shielded from direct wrath, i.e. have never, once, been told you are in the wrong bathroom? You’ve never been yelled at to leave. No one has ever laid hands on you because you were too much, or not enough, girl.

Is there time, at the beginning of this meeting, to account for how language fails us? What if you wrote “in remembrance” on your button? What if you wrote “love doesn’t always win”? If you were feeling contentious, which you always are, you’d write, “This button goes by he/him but the person it’s pinned to goes by she/her.” Not because you think gender is a silly thing, but because buttons are. Because language is. Because bagging and stamping identity is.

Your button should just say “asshole.”

5. Ask the long-haired lady wearing a flowing skirt beside you to choose your button.

Because you are a troublemaker.

Because sometimes you get an irresistible urge to confront, or startle, or rattle people, especially long-haired ladies wearing flowing skirts. And even if this wouldn’t actually rattle her, in your imagination it shocks her out of her meeting-induced stupor. She spends the rest of the day interrogating her life and falls in love with ambiguity and cuts off her hair.

Because you have delusions of grandeur.

Because it doesn’t matter who you think you are. Because, in low moments, you suspect that whatever button the stranger beside you might choose would be at least as accurate as whatever you chose for yourself.

Give in to the exhaustion of humanity’s flawed state. Of bad ideas. Of intolerance masked as tolerance. Say nothing. Resign yourself to being part of the problem because the problem is so much bigger than you, and things could be so much worse. You’ve seen it when things were worse. A button-based offense is so small it’s laughable. Go cry over your buttons, you think. People are dying, they’re getting shot and beat-up and fired and kicked out, but sure, let’s hear about your button problems.

Do nothing because there’s not really an opportunity, and the moment has passed, and that’s not why you’re here, and because you can. You can let this go, and no one will ever know or care. But know that your choice is not without consequence. Small as it is, this moment is a kind of practice. Doing nothing now might lead to doing nothing later, when the moment is not so small and the stakes are not so low. This is the path away from struggle, from growth, from beauty. It might lead you to accept more narrow, rigid answers to your questions. It might stop you from asking the right questions.

Write “speak up, act out” on your button.

7. Do something passive aggressive.

Title it “So Your Employer Offered You a Pronoun Button.”

Can you poo-poo the button idea without providing an alternative solution? Is it too simplistic to suggest we just talk to each other? You, of all people, do not enjoy talking to people. When talking to people becomes unavoidable, you’re certainly too self-conscious to ask personal questions about pronouns. When talking to people becomes unavoidable, you stumble through your predictable repertoire – how’s your summer and can you believe how hot it’s been – and then escape. Are you really going to smugly suggest that face-to-face interaction is a solution when you never willingly engage in it?

Write “recluse” on your button.

You’re better at this than brainstorming.

Recall the time in seventh grade when your friend patched you into a three-way call, which was the first time you’d ever even heard of three-way calls, so you could eavesdrop on the conversation she had with your crush. Recall the thrill you felt when your crush referred to you as “she” – how, suddenly, with a single pronoun, you felt like a sexual being. You were a she. You replayed the conversation over and over in your head that night, and for several nights that followed. She. She. That was you. She was you. You were she. You were a person who other people talked about in third person. In gendered third person. You were that person. You were a girl. You were a girl that other people might be interested in dating.

Never mind that dating, in seventh grade, meant having all conversations through this mutual friend, via her three-way calling system.

Recall how betrayed you felt by puberty as an institution when you failed to develop in the way you thought you were supposed to. Recall the anger, bordering on hatred, you felt for the parts of you that didn’t follow those rules. How fascinated you were with the body of your best friend when she let you shower with her. How, by high school, you proudly declared you were one of those girls who had only male friends.

How, later, you ridiculed a girlfriend for her haircut because, you said, you didn’t want to date someone who looks like a man.

How that moment follows you.

How lost in the body one can become, how lost you were then. And are now. How the kind of invisibility you cultivated in your youth now makes you unrecognizable to the very people you want to notice you.

Write “inquire within” on your button.

Not your job. The real work. Be grateful that you have the leisure time and resources to do this work. Your parents loved you. You did well in school. No one has ever shot at you; no one has ever punched you. The chemicals in your brain mostly do what they’re supposed to, and when they don’t, you can get assistance. Your home is secure. You can reasonably be sure that if you get pulled over, you will be treated with dignity. You will not die over a traffic violation. You will not die over the way you walk.

It doesn’t mean that nothing bad hasn’t happened, or won’t happen, to you. It just means that in between the fears you have for yourself and those you love, you have the space to work. To work against easy answers and simple solutions. To work at getting the question right. To argue with yourself: what if the answer really is buttons? What if there’s a beautiful simplicity here that I’m unable to see because of my own hang-ups?

To be pretty sure that’s not the case.

Still, you are a word person. You get the emphasis on language. There are words that give you yourself. That get you through the day. That open up other people so you can see them more clearly. Maybe there is something to the idea of wearing language like clothes. Suits of armored words. Pronoun gowns. Adjective earrings and verb sneakers. Things crossed-out and revised. The crossword-puzzle-Scrabble-game of us all. Maybe the problem with buttons is not the fact of them, sitting placidly in their manila envelopes at the front of the room, neatly categorized and ignored, but the ease with which you can remove them at the end of the day. The way they fall apart if you accidentally throw them into the wash with your shirt.

Kelly Magee is the author of Body Language, winner of the Katherine Anne Porter Prize for Short Fiction, The Neighborhood (Gold Wake Press 2016), and A Guide to Strange Places (Red Bird Chapbooks 2016), as well as several collaborative works, including With Animal (Black Lawrence Press 2015), co-written with Carol Guess. Her work has appeared in Granta, Gulf Coast, Kenyon Review, Crazyhorse, Booth, Barrelhouse, and others. She teaches creative writing and queer studies at Western Washington University and can be found at www.kellyelizabeth.com.