I'll Write You When I Get There 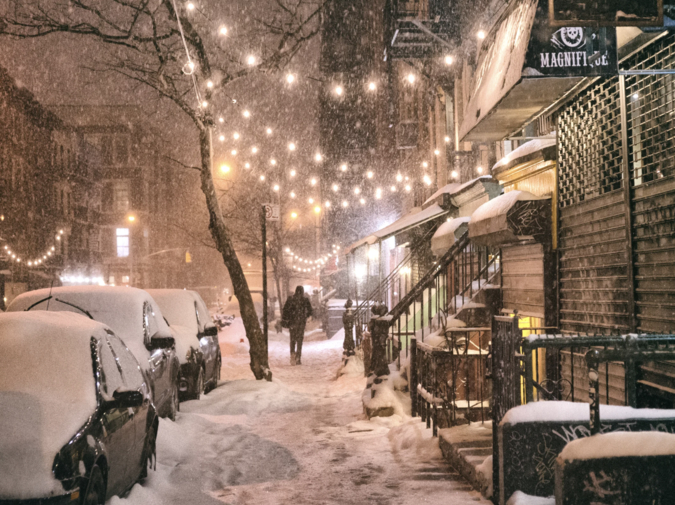 Snow is falling in Manhattan. The lights are bright in shop windows. Cyclists wear gloves, weave through the cars like ice-skaters. On Lower East Side in Ruby’s bar, there is wood paneling, low lighting, red-cushioned seats. Mac drinks whiskey. It swirls around the ice, oily. California. He thinks about California. Her wooden desk where she will be writing her cards, her letters. He knows the beads hanging in the kitchen doorway, the throws on the couch. Owls nest in the cliffs behind her house. The sea in front. There is so much horizon. Perhaps she will write again this year? He doesn’t need her to.

The river had turned the car right over. They’d stood together up on the bridge and watched from there, watched it happen down there in the canyon. Neither of them had moved. They drove to the nearest gas station. The nearest phone. That somebody might do something.

Mac finishes his drink, goes to the bar to pay. He runs his hand over the polished wood as he waits for his change. He holds the edge of the bar: thickness of a wrist. Outside Ruby’s, Brooklyn Bridge is staunch in the dark. Immoveable steel connection. That night after they’d witnessed the car being taken by the river, in the motel room, neither of them could sleep. Nor think of anything to say. He’d reached across to hold her hand. Her fingers unwound from his. She let his hand lie on her wrist. He knew some ground had opened up. He didn’t know how to get it back. Earlier that evening she’d asked, ‘why didn’t we do anything?’

‘There was nothing we could have done.’

‘But we didn’t do anything,’ she said. ‘We may as well have not been there at all’.

California. She puts her pen down from her writing. Her Christmas cards, her letters. She holds the edge of the table, leans back on her chair. She is not a sad woman, despite what others may think. She is, perhaps, happy. It is raining in California. Her window overlooks the sea. Land behind, the sea in front. Nothing to connect them. The rain slides down the glass, is slicked around by the wind. They had found out about them - the young couple in the car - afterwards.

She was from Minnesota, seventeen. He was twenty. He worked on farms, could drive a harvester at fourteen. She was wearing a turquoise vest the day she met him, the lace of her bra just showing. She had large, watery eyes. Hair the color of purple maple. He played the electric guitar. He had a car filled with demo tapes of a band that would later become The Hold Steady. A chain from his wallet to his jeans. He had beautiful, beautiful black hair. He ran his fingers through it. They met on a long Greyhound journey. Sat next to each other for hours, going miles and miles someplace. Once they got going they talked the whole time. Nothing had ever felt so easy. Fooling around she put her eye-liner on him. Then her mascara and some lipstick. She was fun. She said it made him more kissable. He felt something fall apart inside him. At night she rested her head on his shoulder. In the morning there was no mention of it - he just got off the bus with her. There was no distance anymore.

The Christmas after the accident she did a terrible thing. The parents’ names had been printed in the paper. She found their addresses easy enough. She thought she wanted to write, to say something - that she’d been there. That they hadn’t been alone. But she couldn’t figure how to say it. Then that Christmas she sent each family a postcard. She was going to leave them blank. She just wanted to send something. She didn’t know why. Then just before posting them she wrote their child’s name at the bottom of each postcard. She walked to the mailbox and dropped the bundle into the dark and it was over. She’d done this every year now, for twenty-five years. Only ever the child’s name on the postcard. Every year, of course, she felt she shouldn’t. But as each year passed, as each act accumulated then settled, she felt more compelled to send them. As if to stop now would somehow be worse. Something taken away a second time.

Mac walks across Brooklyn Bridge. It is biting cold, exposed in the middle. No buildings to shield him. He looks down into the black water. It would not take long to die in this. She had drifted from him after that day. Or they had moved away from each other. He had been over it many, many times, occasionally feeling he was approaching the truth of it. Of what had happened. Or what had been laid bare. He couldn’t get to her after that day. Witnessing the accident had clarified something for her, almost immediately. Like a chemical reaction, her substance changed. Above him snow emerges from the dark. It is beaten and thrust around. The bridge’s huge steel cables plunge down from the dark, hang like rope between the towers.

She walks to the mailbox. The streets are gray, wide. Through the park. She drops her letters, the postcards, into the mailbox and it is done again, this strange tradition. They will go out now, out across America, her blank postcards, arriving with the snow, falling through mailboxes in quiet hallways.

Back in his house, a small pile of mail on the floor. Mac bends down, picks them up. A handful. He shuffles through them, front to back. There is a letter from her. The familiar handwriting. With his finger he traces the curled calligraphy of his name. The line dips and rises, dips and rises, like a telegraph cable seen from a train.

The mother understood early and accepted this gift - a postcard with her daughter’s name on it. Understood that this - this may save them yet. For years the father was bewildered rage. How could someone? But over the years he’d come around to the fact, learned to accept it. The mother takes this year’s postcard. Washington State. She takes it into her daughter’s room. On the wall is a huge map of America. Postcards are pinned all over it. She pins this one to Washington State, and, like all the others, the blank side facing out. Her daughter’s name. She steps back. Her husband leans in the doorway. Each year, postcard by postcard, state by state, these gifts settle like snow across America. And with each year, as her grief accumulates, she senses ahead of her, somewhere, a great armistice, sometime, a place where there will be no distance anymore, where what is ahead of her is blank and vast and endless.

Jacob Parker lives in London and teaches in a sixth form college. His short fiction has been featured in The London Magazine, Structo, Open Pen, MIR Online, Litro, and The Interpreter’s House, amongst others.