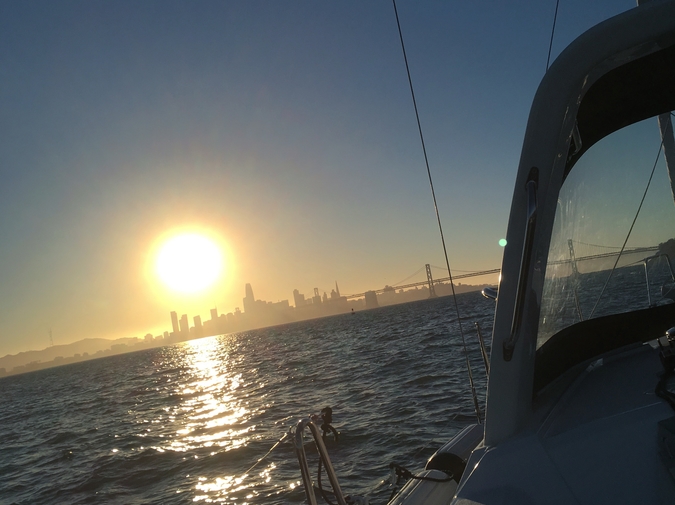 My first boat ride was in Barbados. I was too young to know how to remember things, but I have a snapshot of myself as a curly-haired toddler sitting on a boat deck made of wood that had faded to the color of sand. Behind me, men lounge back on their elbows, staring at the sea. An arm—I don’t know whose—reaches into the frame and holds one of my hands. My other hand clutches a little yellow life belt strapped around my middle. I am not looking at the sea or the sky; my attention is fixed on the ropes curling just beyond my toes. My right foot is tucked in and down and it appears that I’m trying to stretch it to grab the rope, but I know the awkward angle is more likely the leftover effect of an infantine clubfoot. When relaxed, my adult feet still fall the same way. It’s possible I am unaware that I have left the land. I don’t know enough to be afraid.

My first boyfriend loved to race sailboats. Afterwards, he gave the play-by-play of each race, elbows on the table, hands cutting through the air. This boat went this way, that boat went that way—I could never follow his stories. I knew a few things about the smallest of boats—Lasers, Sunfish, Hobies—but once he said “regatta” I knew I was stepping into a too-fast current of language: rudder, cleat, jib. Ballast, tack, tell. Other words I understood. Nausea, vomit, hurl, retch. Every time he went out on the water he got seasick. His racing stories were generally euphoric tales of puking over the side as he crossed the finish line. I was a diligent girlfriend; I congratulated him on his victories. Years later, sailboats still conjure images of pre-digested food chunks floating in water. Of bodies bent in at the midsection, knuckles white on an unnamable boat appendage, lips wiped on windbreaker sleeves. The body and the mind do not always agree. This is my first lesson in love.

My stepfather lived on a boat before he lived with us. He had recently divorced his first wife and moved into a friend’s sailboat that was docked on the bay. Every morning he would shower in the marina’s locker room and shuffle, bent-necked, around the boat’s small cabin, getting ready for work. He would drive inland to his bank job in a glass and brick office building, where he would look out his office window at the sun glimmering off car windshields on the sea of asphalt surrounding him. In the evening, he would return to the boat and sit on the deck, listening to the water lick the fiberglass hull beneath him, its coolness like a distant radio playing an old, forgotten song. Overhead the stars shimmered an infinite romance. When he married my mother he moved into her townhouse far from the water. On vacation, they took up scuba diving. It was only then that we learned that my stepfather couldn’t be on a moving boat. Getting to dive sites made him so ill that he couldn’t get in the water. They dove from the beach instead, but these options were limited and unexciting and eventually they gave up their underwater excursions. They took up hiking instead, but my stepfather liked to go alone, walking and watching the sun winking through the leaves overhead.

My grandfather was a Navy man and while he took pride in his imperviousness to seasickness and storms, he wasn’t much of a swimmer. When my grandmother went for her morning swim in the ocean, he would walk up and down the beach in cargo shorts, cigar stuck between his teeth, shadowing her laps in case something should happen. Just beyond the breaking waves, the neon swirl of her bathing cap bobbed like a beach ball on the surface of the water. As each wave rose, she would disappear. When the wave broke, her bathing cap would re-emerge. As my grandfather marched up and down the shoreline, we wondered what he intended to do if something should happen. Rogue wave, undertow, shark attack, leg cramp, exhaustion. In the end, we decided it didn’t matter. What will be will be. She was a good swimmer, and at least he was getting some exercise.

We took the kids on an Alaskan cruise to see glaciers and fjords and get pulled around by a team of sled dogs. The ride was smooth enough to pretend the ship was just a slightly cramped hotel, but on the way home we hit rough water in the ocean and the ship began to pitch from side to side, sending the waiters staggering sideways and tipping the daiquiris off tables. The crew hung supplies of vomit bags on the railings of the main stairways and made announcements that Dramamine would be made available to anyone who needed it. Passengers scurried into their rooms. The staff cleared the napkin holders and condiment containers from the bar and hovered in the corners, their faces clenched. We looked at one another, waiting for the inevitable distress. When it didn’t come, we went to the bar on the upper deck and played hearts, watching the pool water slosh in giant waves over one side of the deck, then the other. In the evening, we went to the dining room. It was mostly empty and the waves slapped the porthole window next to our table. The waiter said we could have as many of the menu items as we wanted—no one wanted to eat and the extra food would just go to waste. We ate and ate, surprising ourselves that we could eat so much. That night we curled up in our beds and marveled at our luck as we rocked to the rhythms of the ocean, our bellies aching with fullness.

Christina Kapp's short fiction, poetry, and essays have appeared in numerous publications including Passages North, Necessary Fiction, The Forge Literary Magazine, The MacGuffin, PANK, and Pithead Chapel. She teaches at The Writers Circle Workshops in New Jersey. Follow her on Twitter @ChristinaKapp and visit her website: www.christinakapp.com.