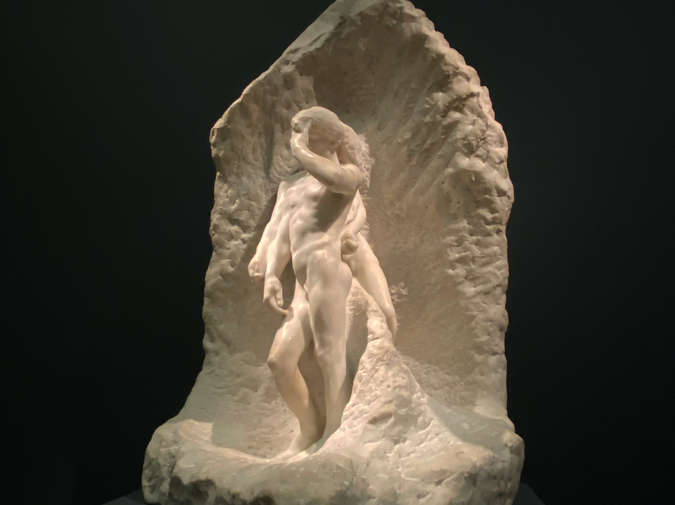 The last time we talked she said, well, you know where to find me. And I do. She’s in an apartment near Cypress Avenue, where she once imagined we would walk hand-in-hand in summertime. Where we did, just once, as two men stared her up and down. Tall, lean, green eyes always glinting with sweetness and righteous anger.

On our first date, she told me how the lights in the park came on right as we kissed and I appeared haloed, the blurry white orbs behind my head in the chilly near-dusk. We’d spent the afternoon walking lower Manhattan after meeting on the gayest pier in America. Her midriff exposed and me, nervous and jumpy as we crossed avenues. She kept blinking over and over, staring as though she was trying to memorize my face. Later, in a pretty hotel room near the Holland Tunnel, she undressed for me. Her body was a revelation. This sounds saccharine, that’s fine. We spoke until late, riffing and laughing, taking turns in tenderness.

In the time between this time and the last time we often made one another feel very very good and very very bad. She didn’t eat, she wanted to die, then I wanted to die, I was drunk and upset, then she was drunk and upset. Most of the time, we were hundreds of miles apart and when together, the impossibility of an “us” hung heavy over the room. I gave her emotional whiplash and she was full of a sorrow that wouldn't abate, which made me both sad and angry. I felt small in the face of her depression. My inability to help. Uncomforted by the knowledge that I couldn’t really help, that's not how it works. Knowing how my own mental illness has never been something others could handle. Something special, just for me. Xoxo. Doctors, blood draws, meds, and try as I might, my inability to experience sustainable joy. This year, though, I will try again. Anyway. Everything was always a disaster. I was coming to terms with past trauma and my own cruelty, a cutting meanness not inherent to me but instead programmed and thus fixable. She was haunted by her family’s history of violent whiteness, by systemic racism and late stage capitalism, by the failings of her own collective, by a workplace claiming equity, praised for it, and never delivering. Both of us, saying, I fucking hate people. Both of us, so clearly full of love for people, both specific and generally. Both wanting another world, not like this one. Both saying, I hate it here.

On our last date, I cried on the floor of that apartment near Cypress Avenue. My back against her wall, I looked around the room, cataloging: a monstera I brought as a housewarming gift; bookcases betraying a brilliant, associative mind—the LOTR trilogy, a chess board, tomes on capitalism and ecology, The Power Broker, an anthology of gay poetry, more Caro books on LBJ, a poetry book I’d gifted atop the dusty shelves—; a computer monitor, where she stayed up all night playing games set in the Middle Ages, feeling such softness towards her horse; the postcards I’d sent, taped to the wall; the blue, pink, and white flag hanging above her bed.

On our last date, once I had ruined what maybe couldn’t ever exist anyway, she called me a car. We sat outside waiting the 9 minutes as she smoked a cigarette and as I tried not to cry more, feeling acute loss and like a villain. She was surprised I'd let her do this, unusual for our power dynamic. It wasn’t about money, it was about sentiment. The ride arrived and I stood. As I slid into the backseat, the driver called me by her name and all I could bring myself to say was, yes.

I’m sitting in a big, empty house exactly 191 miles from her front door via Taconic State Parkway (fastest route, the usual traffic) or 203 miles via 1-87 S, listening to her auto-tuned voice on the EP she sent me, remembering the way her eyes lit up when she told me about oysters’ filtration of water at golden hour on a brisk April afternoon, the sun setting over all of the bridges and ferry boats.

Zoe Contros Kearl is a queer writer and editor based in Vermont. Writings can be found in Hobart, Kenyon Review Online, Neutral Spaces, HAD, Entropy Magazine, and elsewhere.