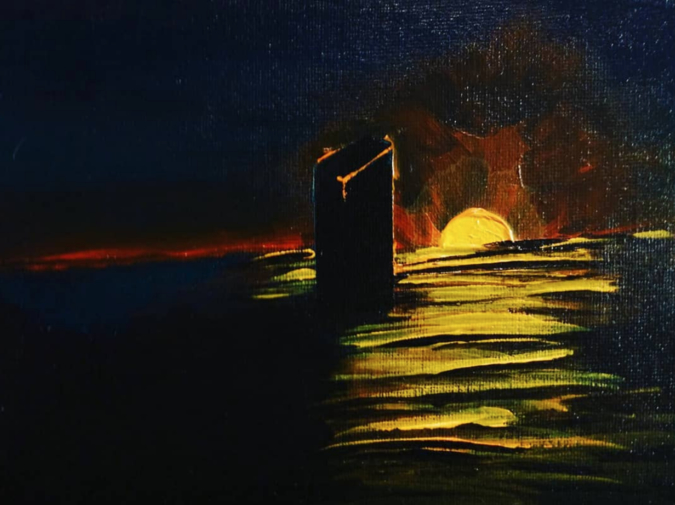 It is pain, crystallised as sound. Stabs holes in the plastic headphones the tech put on her and shatters the easy-listening radio station coming through them. Maeve tries to focus on the music but the MRI cracks every bar.

Desperate for a piss. Don’t think about that, think about snow. Like you did during the Christmas carols earlier. Clumped on the skinless trees like icing. Coming down in tufts like fur. A glass stream over black rocks. No, that’s water. And you can’t fucking go for a wee, can you.

The MRI grinds its teeth next to her ear.

Think about department stores with giant displays of toys and sparkling ornaments. They’re handing out peppermint sticks and samples of hot cocoa. Like you walked into one of those holiday cards for old people. What would you buy in there? A silk scarf. Some wool-lined gloves. Champagne truffles that come tied with a ribbon and are about ten quid too expensive.

Bringing you out for the contrast, won’t be a mo’. The tech’s voice through the headphones has an insectile tang.

Maeve keeps her eyes closed for the minute she’s out of the tube. She’s like an animal. If she sees the plastic cage they locked around her head to keep it still, she’ll scratch her hands raw. The neurologist injects the cannula in her arm with contrast agent and she slides back in like a body in a morgue. She clamps her elbows against her sides so the tube walls don’t catch her bare skin.

The next scan will be a little over five minutes, says the MRI. She’s struck by the contrast between the polite femme voice they've given the MRI, and the violence of its real voice. It  would never translate to human conversation. Grinding and screaming, loud as a rock concert right next to her face. Maeve wonders how it works. Does the tech push a button and let the whole programme run? Does he have to select specific scans to trigger their announcements?

Where were we? Department stores. She saw a cake as she went past the window of Liberty’s once that was six feet tall. A tower of fruits and cherubs sculpted in chocolate and decorated with edible inks and gold leaf. Imagine the cake at a white ball. People in masks and sequins tasting slices they don’t finish. Prosecco, sprays of orchids. A swing band.

Why does the MRI force Maeve’s entire personality to change? She’s wearing a ripped and faded punk shirt and black jeans. She has a pair of leather gloves but they were her grandmother’s. She doesn’t celebrate Christmas. Maybe the noise and the tube tear away all the layers of scar tissue she’s carefully grown over her programming.

The next scan will be approximately two minutes. This sound is stars dying. Fast bolts of light behind her eyes.

Then, sweet silence. A stream of frigid air on her face. Just a second or two and the tech will pull her out.

No, calm. Maeve wiggles her toes, her fingers. Calm.

She remembers there being people. Examination rooms right there, a linoleum hallway, a lobby, the outside world. But all that exists is a white cylinder containing her body. A body she can't even see because if she opened her eyes there’d only be the plastic head cage. Like being a brain in a jar.

Don’t be stupid. Someone’s expecting the MRI. She clamps her eyes shut and squeezes the plastic bulb to trigger an alarm. It’s stuck to the cup of her palm with sweat. The tech will come and get her.

When the neurologist examined her earlier, Maeve sunk a little through the floor. Her pupils dilated and she stilled into a blurred quiet. Someone could keep her in stasis forever like this if they wanted. A trancing snake. Soma.

It’s really Freudian, that. Turning a doctor into a parent for a few minutes. That’s why Maeve likes him. What happens when you get to the age at which doctors become younger than you? Maybe the trance won’t work. How the fuck do you ask an OAP a question like that? Do you get hypnotised at the GP’s? Maybe they should play ASMR in MRIs instead of radio.

Her bladder seizes like a little death. Where the fuck is the tech? Where is everyone? Where’s the rest of anything?

Ice skating. Ice skating. A swing dance on the edge of a knife. Skates work by squeezing a transient skin of molten water out of the ice. It’s unmade nearly as soon as it’s born. Giant baubles, red and green and gold. A golden statue in a fountain. Knitted hats and mittens. Her dad’s the one with the silk scarf and leather gloves, not her. He can’t take her hand because she’s a better skater than he is so he lets her go free around the edge of the rink. After they skate he’ll take her down the avenue to do his Christmas shopping and then to a candy store with gummy watches the size of a dog and styrofoam peppermint sticks in the windows. He’s been dead for years.

There's something pure about the grief of a death. It's buried, with time, in sediment. You can pile rubble on it, if you like. When it seeps to the surface unbidden, after however long, ten years twenty years thirty, it pours out undiluted. Unearthly blue like the core of glaciers. The pools are warm between her neck and her shoulder.

Why does she care about people dying anyway? It happens. The only thing you can do about it is drugs. Rollercoasters, becoming famous, get a makeover, have casual sex. Start a cult. Jump off cliffs into the boiling ocean. Dark seaweed thrashes over her head.

Under the wet rock a sarcophagus. The body of an ancient and forgotten god. Coins rusted green over his rotted eyes. Canopic jars crusted with barnacles. Dripping spires of mineral ice. Shattered urns, their fragrant oils long gone. The lines of his elegy scratched beneath him, unsung. Written in a language long dead.

She can’t wipe her eyes. The salt dries tacky on her cheeks. The MRI blows cold on her like a riptide.

Underwater, rushing toward the surface, a bubble of exhale tucked under her nose, breaching. Then she breathes in.

Oh my god, love, oh my god. Were you in there all that time?

The light makes her wince and she shivers. Someone grips her elbow. In the control booth, paramedics load the MRI tech onto a stretcher.

She steps backward. Her cheeks crackle from crying and her jeans are soaked in piss. Someone else pushes her down into a chair and puts her bag on her wet lap and wraps her in something thick and warm, like a doll. She wonders why she can’t hear anything until she remembers the foam earplugs and pulls them out.

I need a smoke, she says, maybe not out loud because there’s no reply. So she gets up and walks out of the emergency exit, and nobody stops her.

Alice M. is the pseudonym for a writer who's from a lot of places for any given value of 'from'. Alice writes mostly slipstream fiction and is interested in ugly architecture, weird plants, Jungian archetypes, linguistic philosophy, pre-Christian paganism, and painting. Alice lives in London. www.notveryalice.com