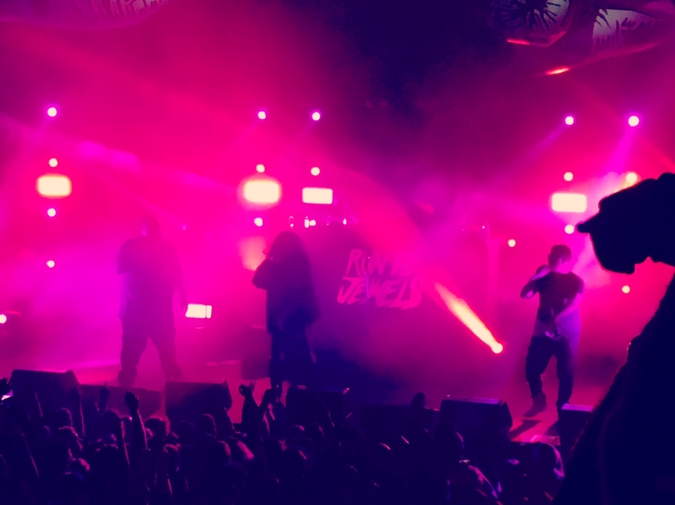 My first thought was, ‘I’m too old for this shit.’ I’d come straight from my suit & tie office-building job to wait in a parking lot (mostly empty, since kids were being dropped off by their parents) to see a somewhat childish act. But, like Detective Murtaugh, I did it anyway, and soon I was in the upstairs bar of the Electric Factory drinking an $11 High Life and complaining about how much my back hurt.

Normally on a Tuesday night, I’d be home on my couch drinking a normally-priced High Life and watching reruns of Frasier, but this was opening night of the ‘Run the World’ tour.

Over the course of three albums, RTJ has gone from urging us to ‘unite and kill the police motherfuckers,’ to the more wary assertion that they ‘don’t study war no more.’ Which isn’t to say the members of RTJ aren’t still angry. They are. But they’re more pensive, reflective, and civic-minded than ever before.

RTJ is still all about the ‘excitement, gun fights, indictments,’ the guys still make dick jokes and rap about smoking weed, but this third album has a layer maybe not absent from previous releases, but certainly overshadowed on the last two recordings.

And I had to wonder while I watched the mosh-pits if these kids were even listening, if they knew Mike was talking about Malcolm, if they realized that Mike and El-P were encouraging them to be good, decent, civic-minded people, people who realize that while sometimes it may come to violence, violence shouldn’t be the goal.

Of course, I listened to the Beastie Boys for years before I realized they had something to say, and look at me now.

Sean West is a basement-dwelling freelance writer from southeastern Pennsylvania.