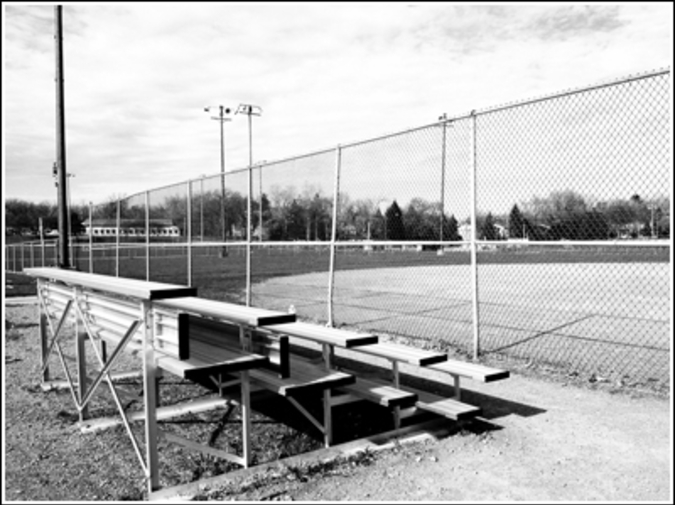 They said the scar tissue would break up in your shoulder, and that this could be a painful process. You imagine it cracking like dry earth every time you loosen up in the morning, and this helps somehow. The pain brings tears to your eyes.

The first time you can raise a ten-pound dumbbell over your head, your father pumps his fist and your mother cries. You wonder if they want you back on a mound more than you do. Your mother’s little Chevy is no longer in the carport, and you can hear her groan when she climbs into the cabin of your father’s truck in the morning. They lease you a hyperbaric chamber to speed the healing.

Your junior college coach comes out to the field before school. It’s early spring, the grass still covered in dew, the air chilled but the sun warm, and you lean your head back as you stretch out and feel it on your face. He walks back behind the plate, the radar gun buzzing in his hand. One of the catchers who you’ve never met before crouches down in his mask and chest protector but without shin guards or cleats, dressed in gym shorts, a t-shirt, and ratty Nikes stained green on the toes from cutting grass. The first pitch feels okay. The ball doesn’t pop into the mitt as you’d hoped. Coach is talking to you, an endless stream of, “Alright now, okay now.” He’s wearing sunglasses and you wish he wasn’t. The second pitch doesn’t pop either. It’s more of a sigh. There’s no late life, no life at all. You tell yourself to calm down, to stop putting so much pressure on yourself, but the rest of the bucket of balls doesn’t go any better.

In church the minister asks everyone to pray for you, and the tips of your ears go red. You sink a bit lower in the pew, and hold the hymnal closer to your face. After the service, they pat you on the back and touch your betraying shoulder lightly.

When Coach puts the gun back into its case, then and again three weeks later, he avoids your eyes and tells you not to worry about speed, not yet, that your location was good and you seemed in control out there. You’ve never seen him lie before, you’re sure of it.

Your father turns into a shadow, weight dropping from his body like water off a raincoat.

You get a job at the gravel pit, and work hard enough to sleep at night. The other guys see you at first as the face painted on the sign on the way into town, but the sign comes down, and they start to treat you the same as anyone else. One day someone steals your lunch, but it never happens again, and you wonder if maybe it was an honest mistake.

You give your mother a check to get a used car and she refuses it. Still, you leave it on the kitchen table. Three days later, she cashes the check, but no car appears under the carport. She forces every smile. She knows how you still hurt.

One of the guys at the pit has a birthday and everyone goes to Stapleton’s for drinks. Afterwards, lying in bed, adrift on a warm sea of bourbon, you remember the hyperbaric chamber, and the soft whirring noise it made, and the clean air inside, and the way when you looked out the plastic window at the light cast on the ceiling by the streetlights, you dreamed of being an astronaut.

James Scott has published fiction in Ploughshares, One Story, American Short Fiction, Post Road, Juked, and other journals. He has been nominated for the Pushcart Prize and received awards from places like Yaddo, the Millay Colony, St. Botolph's Club, the Tin House Writers' Conference, and the Sewanee Writers' Conference. James earned his MFA at Emerson College and currently teaches workshops at Grub Street in Boston