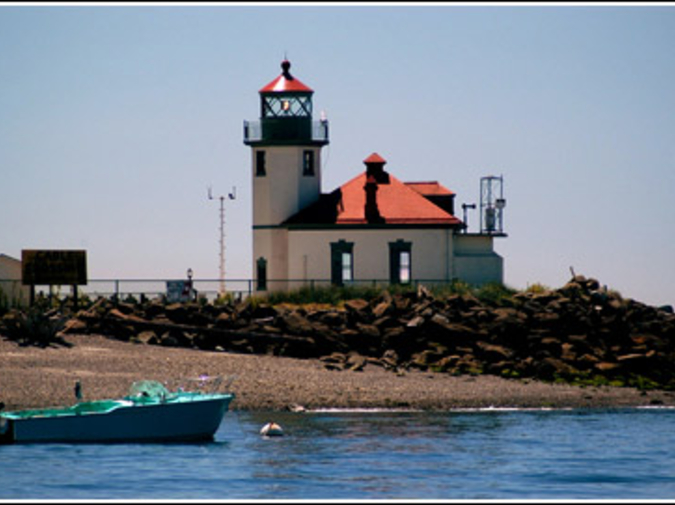 “Thought that one was for us.”

Then she brought her knees up to her chest and he wedged his heel into the edge of the wooden seat and then she asked him for a drink and he gave her his half-empty can.

“Was that okay?” Then he sat back down on the deck next to her.

“Yep.” Then she sat up and touched the steering wheel with her foot. “Does it matter I’ve never been on a boat before?”

Then he moved over to the driver’s seat and took her foot in his hand and squeezed each toe individually. “Why would that matter now?”

“Well how am I supposed to know.” Then he turned the ignition and pressed down on the throttle and the lights from the houses shone thick bands of white-and-yellow across the water.

“I’ve been with a man in every one of these houses.”

“Are you being serious?”

“No.” Then she picked her underwear off the far side of the deck and turned them inside out and then he slowed the boat and moved it into an empty spot on the pier. Then she grabbed a rope and tied it around a plank and then he turned off the boat and stepped onto the pier. Then she held her hand out and guided the boat into position and then water slopped over the side and onto their shirts. Then she dressed and then he dressed and then she led him along the pier onto the sandy grass and the black houses rose up in front of them. Then they walked past a wooden staircase and climbed the hill next to it and then she stepped onto the gravel pathway. Then her body jerked around and crouched and then she jumped back onto the grass.

“It tickles too hard.”

Then he put his shoes on and then she wrapped her arms around his neck and pressed her chest against his back and then he picked her up and stepped onto the path. Then they passed a cut-up oak tree and he brushed her against it and then she kicked his kneecap with her heel. Then they passed a house with a sunken foundation and saw the outline of a snake retreating under the porch.

“So you get two choices: squeezed by a snake or trampled by a rhino?” Then he cut through the backyard of another house and walked around to the steps of their front porch.

“What does that change?”

“It changes that I might live.” Then she kissed him on the cheek twice.

“Sure, life with eyeballs popped and a pancake face and all your tendons out.”

“Well it’s worth knowing.” Then she slid down his back and put her arm around his waist and then they went into the house and then she took a shower and he brushed his teeth. Then she got into bed and set her alarm and then he closed the blinds and got into bed and rubbed the back of her neck. Then she turned over and brushed his face with her fingertips.

“I’ve decided I’d rather be the rhino.”

“I picked the best animal.”

“That wasn’t the question.” Then he folded his pillow in half and ran his hand along her leg and then she turned over again and moved his hand up to her chest and then she fell asleep.

Michael Squeo lives in Wheaton, Illinois and writes for Tiny Mix Tapes. This is his first published story.