Rewatching The Office To Keep My Dead Ex-Boyfriend Alive 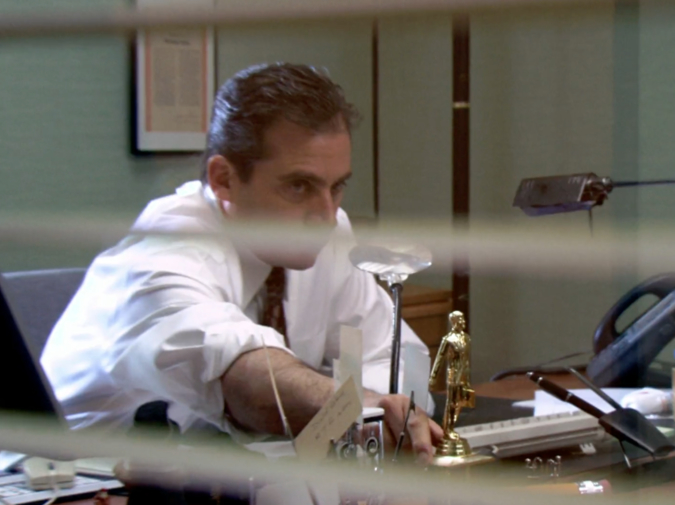 The last time I dream of him, my dead ex-boyfriend asks me to stop bringing him back.

Usually, when I dreamt him alive, he didn’t speak. I’d sit next to him while he sorted mail. I’d watch him turn on the TV. The Office is always on. The good episodes. The ones where Michael Scott is still the boss.

I watched the show with him while we were dating. I did so begrudgingly. I didn’t get it, but he enjoyed it, and I loved him. It helped that the sitcom was based half an hour from our college campus. The local flair sprinkled through the set kept me half-involved in the show. I tried to untangle what made it funny. I tried to see the humor in that’s what she said jokes. I wanted to understand how he worked.

My dead ex-boyfriend was one of the funniest people I've ever met.  He was loud and boisterous, commanded an audience, lit up every room. I felt lucky to be with him. I wrote the sappiest, most saccharine poems and scattered them through our university’s literary magazine. The editor avoided my eye and asked, “are we sure the author of these poems would want this captured forever? Are we sure they won’t want to burn them in five years?”

One night, together in his bed, a slant of moonlight illuminates his face so perfectly I am compelled to memorize it.  He stares at the ceiling and whispers, “Tell me all your thoughts on God.”

I laugh, “Because you’re on your way to meet her?”

I wonder if he knew.

We solidified our relationship the night my house went up in flames. He took me back to his apartment, let me usurp half of his two-room studio. I filled it with Bombshell perfume and the faint smoke that clung to every bit of my clothing. I started calling him my boyfriend. When it became clear we were not meant for forever, it ripped me up. There were signs. The birthday he spent with coworkers while I waited for his call. The drunken accusations. The tarot reading; the tower card. When I broke it off I sat in his driveway for ten minutes hoping he would come after me, willing him to fight for us. That’s the last time I saw him.

I cried the whole way home.

Two years later I watch him die on Facebook. I’m getting married in six months. I am four states away.  Something pulls me from my bed at 4:30 that morning. I stare at his profile as the first RIP messages appear on my screen. I watch in real-time as the world wakes up without him. An accident. A car fire.  Our time in the universe together is marked with ashes on both ends. How poetic. How devastatingly paltry. I sit on the floor of my bathroom and howl.

The Office ran for three more seasons after he died. He missed Threat Level Midnight. He missed Michael and Holly getting engaged. He missed Goodbye Michael. He missed the finale.

I didn’t go to the funeral. I have not been back to our college town since. Instead, I watch The Office on repeat. For a lot of people, it’s comfort tv. Each character acts accordingly, there are no big surprises. For me, it’s escapism. It’s time travel.

When The Office is on, my dead ex-boyfriend is alive. If I drive back to his apartment, the one I shared like a 19-year-old nomad, I can knock on the door and he’d answer. I skip the seasons without Michael and tune back into the finale. I like closure when it ends with everyone alive and happy. I watch The Office to keep him alive. When Michael gets on the plane, I pretend my dead ex-boyfriend faked his death and he’s off in Colorado, deeply annoyed he cannot watch hockey as part of his witness protection agreement. I pretend I will see him one day, that he’ll show up to someone’s wedding and tell everyone it was a necessary heartbreak. That he’s sorry. That he’s fine.

The last time I dream of him, my dead ex-boyfriend asks me to stop bringing him back.

He walks off, without looking back.

I whisper to the empty room of my subconscious, “That’s what she said.”

I haven’t seen him since.

Shannon J. Curtin is a poet, essayist, and humor writer residing in Suffolk, Virginia. Her work has been featured in The New Yorker, McSweeney’s Internet Tendency, Reader's Digest, Scary Mommy, Points in Case, AARP, and other outlets. She holds an MBA, competitive shooting records, and her liquor. She would probably like you. You can find more of her writing at  www.shannonjcurtin.com and follow her on Twitter @shannonjcurtin.