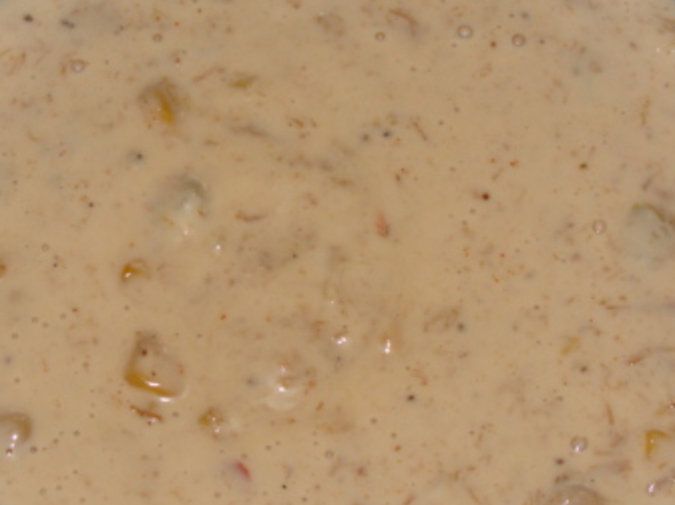 Words cannot possibly describe the utterly disgusting experience that was the consumption of this bullshit soup.

Occasionally I purchase a few non-perishable cans/cartons/tubs of soup from my local grocer for the purpose of storing them in my desk at work in case of a busy day in which I find myself without leftovers or time to go out and procure a fresh and decent repast for myself. I had purchased this plastic tub of soup alongside two other Campbell’s Slow Kettle offerings: the Texas Style Angus Beef Chili with Black Beans Soup and the Tomato & Sweet Basil Bisque (Let's be honest, it's hard to fuck up a tomato soup). Both of these had proven acceptably filling, less than stellar, but inoffensive for the most part. I don’t expect  much more from my emergency lunch options.

The Mushroom Madeira Soup sounds like a combo that could be a knockout success at your local farm-to-table gastropub (kill me now), but every time I glanced at the tub in my desk cabinet, I closed the door, and either skipped lunch or found the time to go out and acquire a more suitable option.

In the process of delaying the ingesting of this tub of soup, I purchased many a lunch from the businesses neighboring the software company where I work: an almond butter banana smoothie, two Club Lulu sandwiches from Jimmy John’s, every option the Whole Foods salad bar had to offer (that’s probably four separate meals), an everything bagel with sun-dried tomato cream cheese from the deli nearby, and a Hawaiian chicken sandwich from the pizza kitchen, where, I kid you not, the health inspectors arrived to shut the place down for violating codes as I was consuming the sandwich, which I did not stop eating because it was delicious. I scarfed it down and saw myself out. I will admit to being one of those people that thinks that eating something off the floor boosts your immune system. So, combined with the weekly catered lunches that my heaven of a workplace provides and the work-from-home leniency it allows, that's about three weeks I put off eating this soup.

Yesterday, I set myself the task of finally eating the Mushroom Madeira soup. I was not strapped for time, but I did have some homemade cornbread to supplement the main course, and so I convinced myself that I had a pleasant meal ahead of me.

Yet still, when lunch time approached, I considered the tub again, and grabbed my wallet to head to the land of the Freaky Fast for one more Club Lulu. Why, after so much clear resistance from the depths of my soul, did I not dump the container in the trash or sneak it into the communal cabinet at work where some other unsuspecting soul might take an interest and try it out?

Why? Because I’m cheap. I have a pathological need to use up food before it goes bad. I am militant about the“first in, first out” policy in my home kitchen, and had refused to purchase new cans of emergency soup until I consumed this one.

So today was the day. Upon cracking the tin lid on the plastic tub (How does this work? How can you microwave that tin rim without causing an explosion?), I could see how clear my mistake was, how right my instincts had been. Have you ever had the privilege of watching the anticlimactic delivery of a placenta after the beautiful miracle that is the birth of a live and breathing human being? Or watched one on Youtube, like I have? Then you will understand the viscosity of the clump that plopped into the glass bowl in which I intended to warm the soup (I said I don’t trust that tin rim). I saw my coworker’s eyes land on the substance before she composed herself enough to ask cheerfully, “What’s that?” I explained the origin of the soup and my resignation to consuming it today, and we both laughed over my pigheadedness. I licked the spoon and got a preview of what I was in for, grabbing the Sriracha before the soup was even warm. I doused the bowl liberally, and returned to my desk, hiding it in the crook of my arm, hoping no one else might notice the blended vat of grey matter I ushered through our office.

At my desk, I stared at the bowl and entertained, then refused, the paranoia that the soup appeared to be dilating: pushing at the limits of its surface tension, volume increasing somehow beneath a thin and invisible membrane keeping the substance from sloshing or splashing the sides of the bowl with any display of soup-like properties. At my desk, I still could not bring myself to consume an exploratory spoonful, so I crumbled in the corn bread I’d brought from home and dispersed the previously-applied Sriracha with several agile rotations of my wrist. The soup took on an orangish brown tint I told myself was more appetizing, and I submerged my spoon under bisque-coated corn bread, placing the morsel in my mouth. Perhaps the soup had not yet fully soaked the bread, but I told myself that this experience could be worse, and carried on.

I was wrong. The next bite contained the incontrovertible fact of what I’m guessing was some sort of reconstituted mushroom. The texture was reminiscent of something I still cannot accurately place: a rubber eraser coated in camel spit? One of those bulbs you stick into a child’s ear to suction out the wax? Let’s be clear: I am a mycophile. I love all things mushroom. This was not some phobic backing away from an easily villainized food group. I knew what was in my mouth was supposed to indicate “mushroom,” but I do not believe it to be the truth of what I ingested.

The taste, however, I was capable of finding a name for: wet dog.

Still: I persisted. I ate more. Why? Because I’m cheap.

I ate every piece of corn bread I’d crumbled into the bowl. As the soup cooled, it solidified to the consistency of the snotty blood clot at the end of a particularly persistent nosebleed and the color of a nerve-dead tooth. Have you ever gone running in the woods and looked down to see the trail scattered with the bloated bodies of ticks, gorged on deer blood or rainwater or some shit? That was the diluted and revolting color of this soup. Have you ever mixed corn starch into the fat drippings of a turkey to make gravy, and then lingered, finishing the bottles of Thanksgiving table wine with your cousin until you look into your grandmother’s floral patterned gravy boat to see the islands of oyster-white fat that have formed on the surface, and thought to yourself, “How could I have eaten that?” Have you ever seen a toenail infected with fungus? Have you eaten rancid peanut butter that tastes like a cocktail of chemicals and grout? Have you ever had to empty the pus from the drainage tube for your mother’s infected colon? I’m sorry for you if you’ve experienced any of these things, but also exultant because: you understand what I went through eating an entire portion of this soup.

That’s right: a whole portion. The container indicated two servings coexisted inside that tub, but I suspect that was some sort of sales gimmick, a value-add, because they knew the truth: it would be a miracle for a person to choke down even one cup, let alone two, of this abominable matter. And I did finish a serving, picking around those chewy bits of mushroom and aiming for the compromised bits of my cornbread.

I can't stop thinking about how awful it was. I’ve been sick all day. Don't be fooled by the fancy name. Learn from my mistake. Don’t buy this. You deserve better.

Jac Jemc's first story collection, A Different Bed Every Time, was named one of Amazon's Best Short Story Collections of 2014. Her novel, My Only Wife was a finalist for the PEN/Robert W. Bingham Prize for Debut Fiction and winner of the Paula Anderson Book Award. She is the nonfiction editor for Hobart Web. Jac teaches fiction at the University of Notre Dame and Northeastern Illinois University.