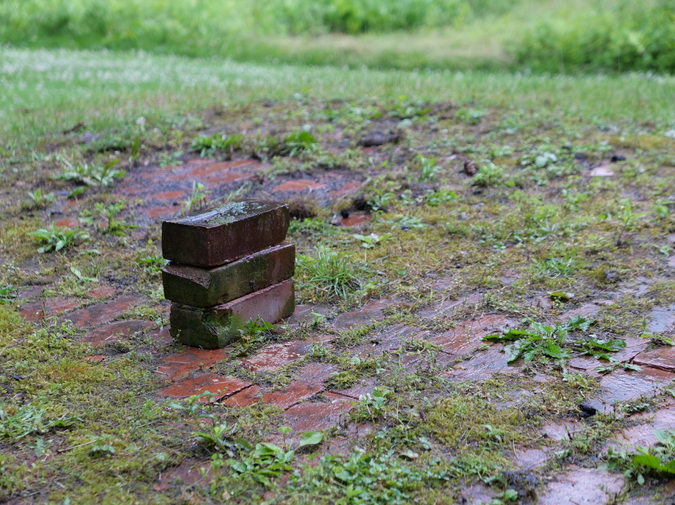 Pharmacists are torn over which tone to take with me, Letrozole being used primarily to treat breast cancer in post-menopausal women after surgery. In Google summary, a “hormone-based chemotherapy.” This pharmacist is solemn but kind. As I push my credit card into the machine, I imagine she thinks I think I might die.

During another consult, a pharmacist looks at the slim white bag stapled to exhaustive instructions for several beats too long. “Ah!” His face lights up. He’s recognized my doctor. “You’re taking these for something else.” Small wink.

Letrozole can be used to stimulate the release of multiple eggs during ovulation but will, as was my case recently, occasionally instead provoke ovarian cysts that burst in such a way that one is certain they are pregnant. My friend likes to say that every symptom mimics pregnancy symptoms.

The doctor tells me to hold firm pressure on each injection site for one minute to avoid bruising (he pushes a finger into my forearm to demonstrate and it’s the pressure one might apply to the top of a warm bread loaf, admiring the firmness). I remember to do this half of the time so just above my underwear, a constellation of tiny bruises, blue-black freckles.

Despite loving to sleep, I have a documented history of insomnia which a doctor years ago linked to anxiety and that seemed right. No sensible doctor would prescribe Lorazepam for insomnia anymore but I still have a script.

If I could sleep all day, sleep for days or weeks on end, I would. Maybe I should give up gluten. Asleep, it’s harder to be anxious. It’s more difficult to focus on having failed or preparing to fail or failing to conceive or failing to launch. More difficult but not impossible. Many nights, I’m still waiting tables in my sleep.

An ex-girlfriend had a prescription for Xanax that she would give me if I was out of Lorazepam so I could sleep when I was trying not to drink. I didn’t love it. I felt edgy the next day which meant we might argue, mainly because she was twelve years younger and I wanted a baby and I knew we had to blow it up at some point so I blew us up slowly, in stages, for a year and half. People like to say that once you have a baby, you’ll never sleep again.

The receptionist at the fertility office says things like “you’ll want to trigger tomorrow night at 10 p.m.” In this scenario, the ovary is the weapon and the egg is the bullet and the uterus is the echo (or lack of echo). In this scenario, when someone I did not know was pregnant is suddenly very pregnant on social media, I feel panic then anger. When someone refers to my husband who does not exist, anger then panic.

This is another pill used for menopause, ovary removal, and cancer.

Because my day job is in marketing I think, isn’t it lucky these fertility drugs have a variety of use cases and potential verticals for aging populations? At 39, I am a good potential lead.

This pill is turquoise and smaller than a pinkie nail, shape mid-way between oval and oblong, it would make a handsome stud earring.

I see a woman for acupuncture who tells me about the early lesbian Seattle as, once a week, she puts needles in my ankles, knees, and belly, 2 on my scalp. Acupuncture and herbs are said to promote fertility. The herbal recipe she prescribes is hundreds of years old and the name translates into "relaxed wanderer.”

After acupuncture on one occasion, full of buzz from the needles, I run into an acquaintance at Trader Joes from my past, the ex of a former drug buddy and restaurant coworker. I am buying club soda and organic greens, and when he asks what’s new, I tell him I’m trying to have a baby on my own. He gently touches my wrist. “Oh mija, are you sure?”

The doctor prescribes birth control when I’m not on other hormones to “give my ovaries a rest.”

I haven’t taken birth control since my mid-twenties when I was also using a lot of cocaine. My boyfriend during that time was released from prison 5 years ago for a weapons charge and since then cannot quit smoking black tar heroin. He goes through the shakes, the sweats, goes 5 days, goes 10 days, offers to get me pregnant for free.

In the middle of my IVF cycle, I stop returning his messages. The thought of texting him back physically nauseates me, which could be a side effect from one of at least ten things I’m taking. Either way, I just can’t congratulate him on day 8. I don’t care about his symptoms. I don’t care about his cycles. He’s so close to death where I might have joined him but now, I am so busy. So consumed with measurement, debt, medicine, the smallest lights.

Rachel Mindell is a queer writer and teacher living in Tucson. She is author of three chapbooks, most recently May/be published by Tammy. Her work has appeared in Black Warrior Review, Denver Quarterly, DIAGRAM, Foglifter, Sycamore Review, and elsewhere. She works for the University of Arizona Poetry Center and Submittable.