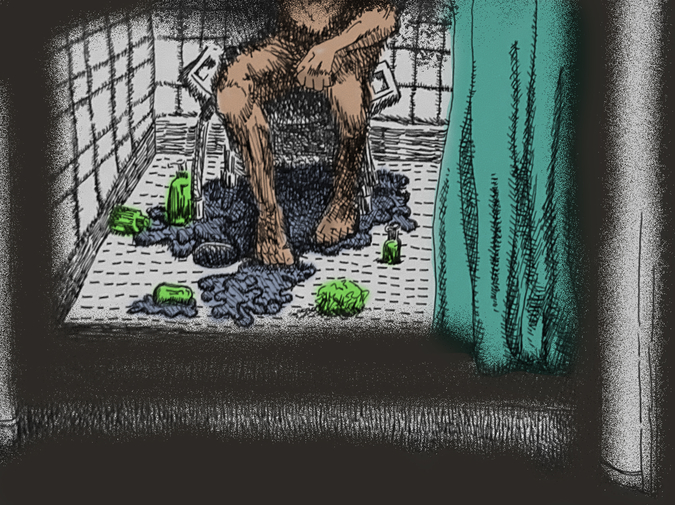 He wondered, "What if I never get out of the shower?" and just like that he never did. Everything outside washed away — what had he been escaping? — but that was the allure. He still recalled something about the subplot of a sitcom, though: Kramer clogged the drain with food debris (relatable), installed a garbage disposal (genius), and spent most of his time on the phone before quitting to share a meal with friends (spineless). These were important lessons.

As a practical matter, actually bathing was unappealing since it meant everything got wet and stayed that way for at least a day or more depending on the season. Waterproof electronics were available, but he couldn’t afford them without going to work so he made his own entertainment.

Idle, mildewed, and alone, he found happiness in the most obvious way: he sang all day and it sounded great, better than any recording. The acoustics were superior to any elaborate performance hall, he felt, and it was so. Serenading his audience of soaps kept him alive for a while, but he ran out of new songs, got sick of the hits, and let himself dissolve down the drain.

Crow Jonah Norlander lives in Maine with his family of humans and hounds. He tweets @crowjonah.