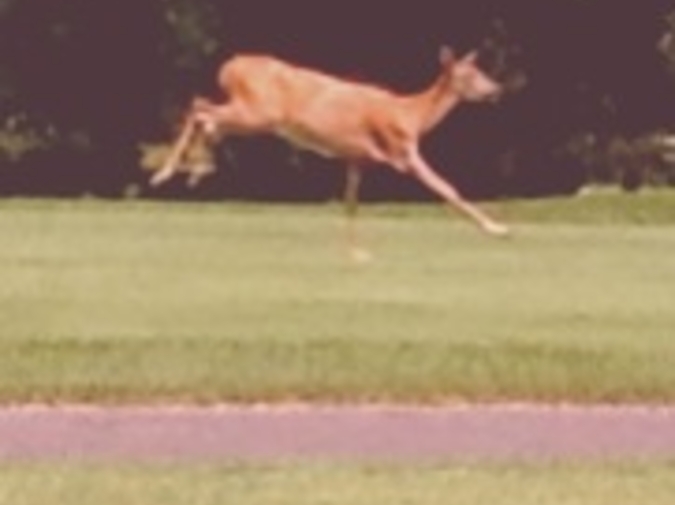 The whitetail flit across the road,
tails raised in greeting or surrender,
a herd—a small stampede—crossing
this rural Iowa highway, emerging
from fields of green, leaping
the cable guard in the median,
then disappearing into a copse
of trees. Thirty, or more, and not
a single buck, and no fire in the corn,
and we’re still thirty yards, at least
from the place where they crossed
when the sleek dun body of a panther
tears across the road after them,
and for a brief second, it’s like we’re
on oak savannah – the road, perhaps
the world’s modern game trail—and
then the cougar disappears after the deer
and we pass the spot, and a few days later
when we try to find that particular field,
that stand of trees, because maybe
it was a sign-of what we’re not sure, but
cougars aren’t supposed to live in Iowa
and when they are, they’re shot, and maybe
it trekked across Colorado and Nebraska,
and maybe we were supposed to find it,
to follow it, to head west.

Liz N. Clift holds a MFA in Creative Writing from Iowa State University. Her poetry has appeared or is forthcoming in Rattle, Valparaiso Poetry Review, The MacGuffin, Ellipsis, Hobart, and others. She lives in Colorado, where she works with at-risk populations. Follow her on Twitter @LizNClift.