Quotes from the lost Breaking Bad episode, "The Room" 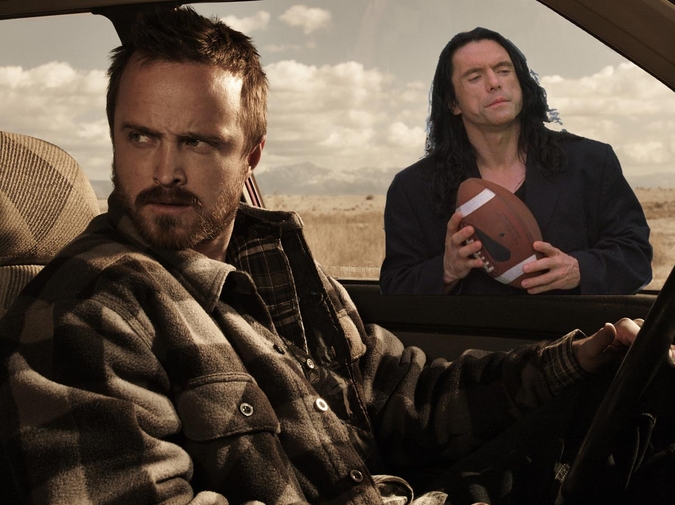 The following are direct quotes from the lost episode of Breaking Bad.

Summary: This episode, "The Room," depicts the depths of friendships and relationships in one life and raises life's most asked question: "Can you ever really trust anyone?”

Skyler: How was work today?

Walt: Oh, pretty good. We got a new client and the car wash will make a lot of money.

Walt: I cannot tell you; it's confidential.

Shop Clerk: Can I help you?

Mike: Yeah, can I have a dozen red balloons, please?

Mike: [hands over cash] Here you go. Keep the change.

[grabs balloons and pats dog on the counter]

Shop Clerk: You're my favorite customer.

Mike: Thanks a lot. Bye!

Walt: That jerk Jesse. He wants me to give him a share of the business.  This business belongs to me. He has no right. I’m not giving him a penny. Who does he think he is?

Walt: He’s always bugging me about the business.  A year ago we agreed this business belongs to me. Now the value is going up and he’s seeing dollar signs.  Everything goes wrong at once. Nobody wants to help me, and I’m dying.

Walt: I got the results of the test back - I definitely have cancer.

Marie: Did you get your promotion?

Marie: You didn't get it, did you?

Hank: That son of a bitch told me that I would get it within three months. I save them bundles. They're crazy. I don't think I will ever get it. They betrayed me, they didn't keep their promise, they tricked me, and I don't care anymore.

Marie: Did you tell them how much you save them?

Hank:  Of course.  What do you think? They already put my ideas into practice. The department saves money. They are using me, and I am the fool.

Marie: I still love you.

Hank: You’re the only one who does.

Marie: Are least you have friends. I didn’t get any calls today…You’re right, the law enforcement business is too competitive…Do you want me to order a pizza?

Hank: Whatever, I don't care.

Marie:  I already ordered a pizza.

Hank:  You think about everything, ha ha ha.

Saul: You can come out now, Jesse. He's gone.

Jesse: In a few minutes, bitch.

Saul: Who are you calling a bitch?

Jesse: You and your stupid mother.

Jesse: I gotta tell you something.

Jesse: It's about Skyler.

Jesse: She's beautiful. She looks great in her red dress. I think I'm in love with her.

Ted Beneke: Wow. So, uh, you gonna be ready?

Skyler: How do you mean that? I'm always ready... for you.

Jesse: So can I come in tomorrow, like late afternoon?

Gus: As far as I'm concerned, you can drop off the earth. That's a promise.

Walt: How dare you talk to me like that!

[pushes Skyler back on the couch]

Walt: You should tell me everything!

Walt: [sits next to Skyler] Why, Skyler? Why, Skyler? Please talk to me, please! You are part of my life! You are everything! I could not go on without you, Skyler.

Skyler: You're scaring me.

[Skyler gets up, but Walt also gets up]

Walt: You're lying! I never hit you! You are tearing me apart, Skyler!

Skyler: Why are you so hysterical?

[Walt walks to the apartment rooftop]

Walt: I have a problem with Skyler. She says that I hit her.

Jesse: What? Did you?

Jesse: I'm just sitting up here thinking, you know. I got a question for you.

Walt: What makes you say that?

Walt: I don't have to worry about that because Skyler is loyal to me.

Jesse: Yeah, man, you'll never know. People are very strange these days. I used to know a girl; she had a dozen guys. One of them found out about it... beat her up so bad she ended up at a hospital on Guerrero Street.

Jesse: Yeah, you can say that again.

Walt: I'm so happy I have you as my best friend, and I love Skyler so much.

Walt: Well, maybe you should have a girl, Jesse.

Jesse: [pauses, then walks forward] Yeah. Yeah, maybe you're right. Maybe I have one already. I don't know yet.

Jesse: Andrea? Yeah. Yeah, we don't see each other anymore. You know, she wasn't any good in bed. She was beautiful, but we had too many arguments.

Walt: That's too bad. My Skyler's great whenever I get it.

Walt: It seems to me that you're the expert, Jesse.

Jesse: No. Definitely not an expert, Walt.

Walt: Thank you, honey, this is a beautiful party! You invited all my friends. Good thinking!

Walt: Hey, everybody! I have an announcement to make. We're expecting!

Marie: Skyler, I have to talk to you. You have got to be honest with Walt.

Hank: I agree with that.

Skyler: Look, I’m going to tell him.  I don’t want to ruin his birthday.

Hank: When is the baby due?

Skyler: There is no baby.

Hank and Marie: What?!

Hank: What are you talking about?

Skyler: I told him that to make it interesting.

Hank: I feel like I'm sitting on an atomic bomb waiting for it to go off.

Walt: I kill you, you bastard!

Jesse: You couldn't kill me if you tried.

Ted Beneke: [confused] I mean, the candles, the music, the sexy dress... I mean, what's going on here?

Skinny Pete: Speaking of which, how did you meet Andrea? You never told us.

Jesse: Oh, that's very interesting story, when I moved to Albuquerque with two suitcases and I didn't know anyone, and I have, I hit YMCA with a $2000 check that I couldn't cash.

Skinny Pete: Why not?

Jesse: Well, because it was an out of state bank. Anyway, I was working as a busboy in hotel, and uh, um, she was sitting, drinking her coffee, and she was so beautiful, and I say hi to her, and that's how we met.

Badger: So, I mean, what's the interesting part?

Jesse: Well, the interesting part is that on our first date, she paid for dinner.

Walt Jr.: Jesse, I’ve been looking for you.

Jesse: Yeah, sure you have. You have my money, right?

Jesse: What do you mean it’s coming?  Where’s my money?

Walt Jr.: I don’t have anything.

Walt Jr.: Put the gun down.

[Walt, Hank, Skyler and Marie immediately happen upon the scene. Walt and Hank wrestle the gun from Jesse with no problem and take Jesse away].

Walt: Let’s take him to the police.  [Hank smirks].

Skyler: Walt Jr., are you okay? What did that man want from you?

Marie: Oh, that was not nothing!

Skyler: Tell me everything!

Marie: You have no idea what kind of trouble you're in here, do you?

Walt Jr.: I owe him some money.

Skyler: What kind of money?

Walt Jr.: I owe him some money!

Skyler: What kind of money?

Marie: Everything is not okay. Walt Jr., that is a dangerous man!

Skyler: Walt Jr., what kind of money? Just tell me!

Marie: What do you need money for?

Skyler: Marie, please! Walt Jr. is with me and Walt!

Skyler: Walt Jr., look at me in the eyes and tell the truth. We're your family.

Walt Jr.: I bought some drugs off of him. Things got mixed up. I didn't mean for this to happen!

Walt Jr.: I don't have them anymore!

Walt Jr.: It doesn't matter, I don't have them anymore!

Marie: It doesn't matter? How in the hell did you get involved with drugs?

Skyler: [screaming] What kind of drugs do you take?

Skyler: [screaming] What the hell is wrong with you?

Walt Jr.: I just needed some money to pay off some stuff!

Skyler: How much do you have to give him?

Marie: This is not the way you make money!

Skyler: [screaming] How much?

Walt Jr.: [screaming] Stop ganging up on me!

Marie: Well, it is time somebody ganged up on you for God's sake! A man like that! Where in the hell did you meet a man like that?

Marie: It matters a great deal! A man holds a gun on you! You almost got killed and you expect me to forget that happened?

Walt Jr.: You're not my fucking mother!

Marie: [grabs Walt Jr. by the shirt] You listen, you little boy!

Marie: Somebody had better do something around here!

Walt: Are you ok?

Hank: Come on, stop, it was a mistake.

Marie: A mistake? That he takes drugs?

Marie: What’s clear? I am going to call the police.

Skyler: Marie, stop, it was a mistake, just stop.

Walt: Why did you do this? You know better, right? Why?

Skyler: Walt Jr., you know we’re your family, and we’re gonna help you.

Gavin Mhley has been pushing the movie The Room on people like it's blue meth since 2009.  He once met Tommy Wiseau at a midnight showing, but was too star-struck to speak.  If you didn't appreciate this piece, he would tell you to "leave your stupid comments in your pocket!"  He would also politely tell you to watch the movie.