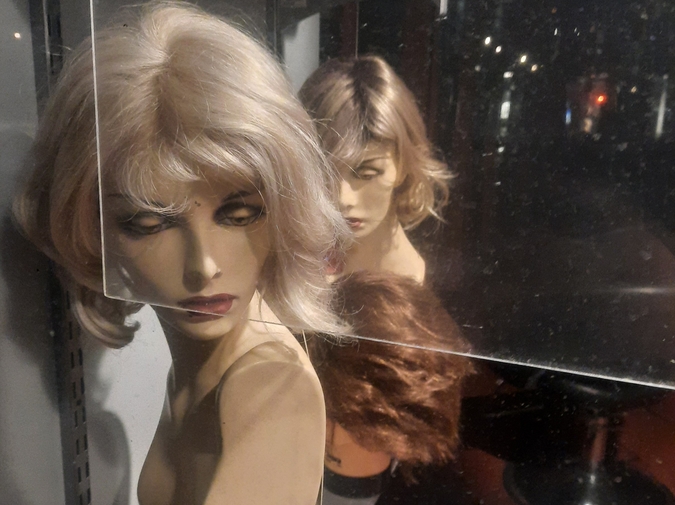 I saw you on Hollywood beach through the weave of strung volleyball nets, walking with someone just as tall as you are. Seeing you again was always a possibility— you gay, I think, me queer, us at the gay beach, a queer volleyball league in play; it was never inevitable though, us no longer in Kansas City, you moving to Chicago years before I would.

Jack Halberstam has a book called In a Queer Time and Place. Halberstam discusses queer space, a concept I understand, and queer time, a concept that I historically have not. For so long I have been unable to graduate past linear time, to understand it more complexly, instead of just nodding at the mention of it being a social construction, believing it to be too esoteric for me to grasp: sand running through the cracks in my cupped hands.

Maybe queer time is remembering the past

When I think about sand as imagery, I think about it as an allegory for a wavering foundation, a comparator to imagine the innumerable stars in the sky, a literal way to measure time through observation in an hourglass. I categorize these images as sand being ‘outside of’ or ‘contained within’— a foundation outside of and beneath the house, the stars out of reach, sands of time contained within a glass fixture— but not how sand gets into crevices, garners in corners.

I met you via the internet, where we decided to meet up for coffee at the shop around the corner, respective to me, respective to you too. We got pho on a different day, and I pronounced it like “foe” and felt comically embarrassed when I learned of my misstep. We went to an arcade bar soon thereafter where I was a stranger to those games. That feeling of strangeness was held in my startled eyes, maybe reflected in the beer I spilt all over the bartop. Together we ascended to the roof and saw the late sun descending behind the buildings in downtown Kansas City. Beer, then buzz, then us in your bed.

Halberstam’s idea of queer space, tersely, is about the spaces in which queerness exists in which he compares rural queerness vs. metropolitan queerness. Halberstam theorizes the queer divide between rural and metro with the term “metronormativity”, which names the cultural essentialization of all things less than cisgender, less than straight to big city life, which neglects how some of us find meaning in the smaller parts of the world. This theory made sense to me, not living in Kansas City long-term, but rather a place in a valley surrounded by tall grass, flint-speckled hills. After the summer we parted, I learned about queer space, saw my gender dissolving, reconstituting into something different, so much of which felt like happened among tall grasses, Flint Hills, in a smaller part of the world. I think about queer time now, and I’m trying to grasp at it, having seeing you on that gay beach.

I wonder if you saw me as I saw you, through weaves at Hollywood. Maybe you did. Maybe you didn’t recognize me, me with longer hair, growing tits, a new name, and an age much closer to 30 years old than 20. My friend was next to me, both of us judging the lines of the volleyball court; I told him that I saw you, recognized you, with sand in between my toes, trapped between my skin and waistband, later spilling onto my floor.

Maybe queer time is reading the present onto the past

Beer, then buzz, then us in your bed, then me calling to you, your roommate, y’all’s dogs from my balcony days later, where I joined your evening walk. I can’t remember what I was thinking about time as a concept during that moment. Instead of recalling what led me to such an instance of our evening walk, or imagining what a future you-and-I would look like, I remember it being a good, spontaneous present.

To think about queer time is to think about regular time first; there may not be such a thing, but there is something normal about setting an alarm for the morning, knowing that buses run on a cadence, anticipating an aunt, or someone of the like, to ask you when you’re getting married, when you’re having kids. Queer time is that time which is not necessarily regular: not always partnering, having kids, nor growing up according to a prescribed societal schedule, nor even living to the full age of human capacity-- definitely not growing tits and going through a second puberty on a gay beach, being much closer to 30 years old than 20.

You looked how I would expect you to in your beach apparel, almost the same, but slightly more mature with those handful of years between there and here. You were as handsome then as you are now. I imagine your voice still reaches the depths it did when I said “foe”, spilt my beer, and went to your bed with you. I can’t remember why we parted ways, though I know it includes me, my anxieties, maybe me telling you those things before excusing myself from your house. I think it was queer time in a way for me, knowing you owned a business, a house, knowing that I wasn’t ready to grow up, though I doubt you were asking that of me during that quick fling of ours.

I have tried over and again to write about my sight-seeing of you on a gay beach in Chicago, me trying to grasp at sand, it running through the cracks in my cupped hands and finding the edges of my apartment. I tried to write you as a “harbinger” in earlier drafts: a keeper of the year in which we met. I was reducing you to a tick on my timeline that held the queer spaces in which my gender dissipated and crystalized into something different, trying to keep it all ‘outside of’ or ‘contained within’. I wonder if you saw me, recognized me, if you were queerly time traveling like I was. But I don’t get to ask: did you have sand in between your toes, in your waistband, on your floor, grasped otherwise?

I saw you on Hollywood beach through the weave of strung volleyball nets. I was seeing you through my queer time with a past that cannot fully be named, and with its present in which I don’t know if you know my name. There was sand in between my toes, trapped between my skin and waistband, later spilling onto my floor. Pending their arrival in crevices and corners, lay my grit at which to grasp.

Maybe queer time is letting it gather how it does, grasping at what you can

Aislin Neufeldt (they/she) is a writer in Chicago. Much of their work engages with ideas of queer identity, embodiment, and interaction to space and place, often through personal readings of queer theory. You can find her work in Essay Daily, Barstow & Grand, and A Day is a Struggle with a forthcoming piece in Trans Bodies, Trans Selves.