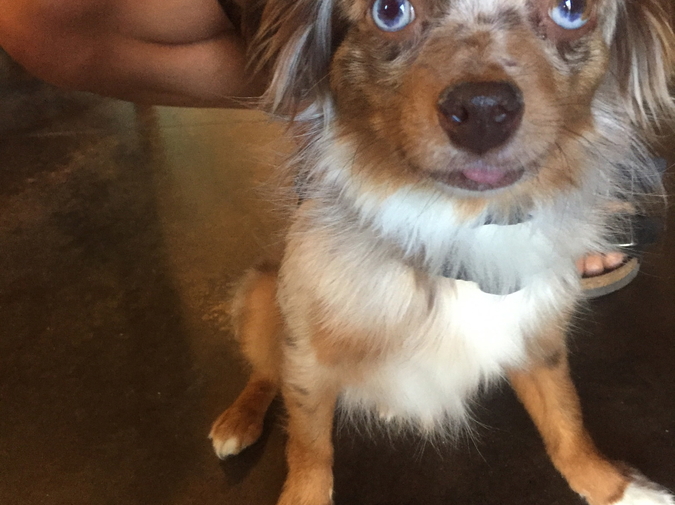 The puppies are back at WBC, and I’m third in line. This is one of the many reasons I chose to go here. Chose to go to Western Baptist. Because they care about us and our stress levels. They get how tough it is to be a college student these days. I’ve got three finals and! three papers due in the next four! days, but the puppies are here all week from 10 to 6, and I’ve got two vouchers for the puppy pen, and then of course there’s the taco truck and the funnel cake truck! both taking meal swipes, and there’s the sumo wrestler padded arena thing, and there’s the jumbo fantasy castle bounce house. I’m just saying, it looks like a carnival on the grass quad, but in seriousness, final exams are approaching and we’re all just a little stressed out here. For me, it was a no-brainer to use my vouchers on the puppy pen. Let the silly boys wrestle their stress away in that sumo gear.

I’m checking my phone and it’s 10:13! and in two minutes—two minutes!—it’ll be my turn to de-stress. They let twelve students in at a time, and there are twelve puppies! in there. I got here just after 9:30 and was fifteenth in line, and then at 10 on the dot a puppy worker opened the gate and twelve stressed-out students darted toward those scrumptious pups.

Oh those pups are so scrumptious, and I’m watching them wrestle and play with my fellow stressed-out peers, that lucky dozen, and oh my! that one’s licking her face, lucky duck, lucky pup girl, and I’m studying the faces of all those cuties and figuring out which one I’m gunning for, and oh sweet Saint Lucy! the puppy workers are corralling the stressed-out students, who do in fact look less stressed-out after their puppy time, too bad we still have those pesky finals ahead, but no matter because now the gate is opening for my group, and I feel the same kind of giddy as when I’m at Disneyland and my group is let in to the Dumbo ride and I rush in to find the perfect Dumbo to climb in, preferably one with a pink bow, but purple and yellow are also desirable colors.

The gate opens, and the three in front of me rush in, and once they’re out of my way, I make a beeline for the pup with brown floppsy ears and white spots on her nose, and I would have settled for the pup with golden floppsy ears over there, but who am I kidding? this is the pup I’ve been longing for, and I swoop her up in my arms—oh him!—and I nuzzle him under my chin and then bury my face in his tummy, and my nose grazes his little boy parts, but oh well! and then I move him into the crook of an arm, and I sit criss-cross while rocking him and then nuzzling him and then rocking him and then nuzzling him. I could live with my face in this pup’s belly. This is what I want all the time. All the time I want this little guy’s tender skin and pup fur relaxing my face.

But now I’m being nudged by a puppy worker, and there’s no way fifteen minutes have passed, but the puppy workers are corralling everyone in my group, and my fellow stressed-out college mates are heading for the gate, having relinquished their pups to the green well-maintained grass, and some of them look somewhat de-stressed, blowing air kisses as they depart from the heavenly pen, but not me. Not me! I stand, but I’ve still got my little guy smushed to my face, so I move him into my chest, and I’m trying to tell this puppy worker that I’d like to use my second voucher now too. But he’s saying, Back of the line, miss, and I’m reaching for my second voucher, but he’s not having it. So I back away while guarding my pup, and two other puppy workers approach me, saying miss, miss, please set him down, miss, but I’m not done yet.

I turn my back to them, and there’s the freshmen dorms in the distance, and I’m off, leaping out of the pen like a protective momma, bolting across the grass toward home-away-from-home until I’m brought down like prey, someone’s arms ensnaring my calves, my chest and cheek smacking against the manicured lawn amid gasps and a yelp.

Derek Updegraff is the author of the fiction collection The Butcher's Tale and Other Stories (2016) and the poetry collection Paintings That Look Like Things (2018), both from Stephen F. Austin State University Press. His work has appeared or is forthcoming in Bayou Magazine, The Carolina Quarterly, CutBank, The Greensboro Review, the minnesota review, North Dakota Quarterly, Raleigh Review, The Southampton Review, Tikkun, and other places. He lives and teaches in southern California.