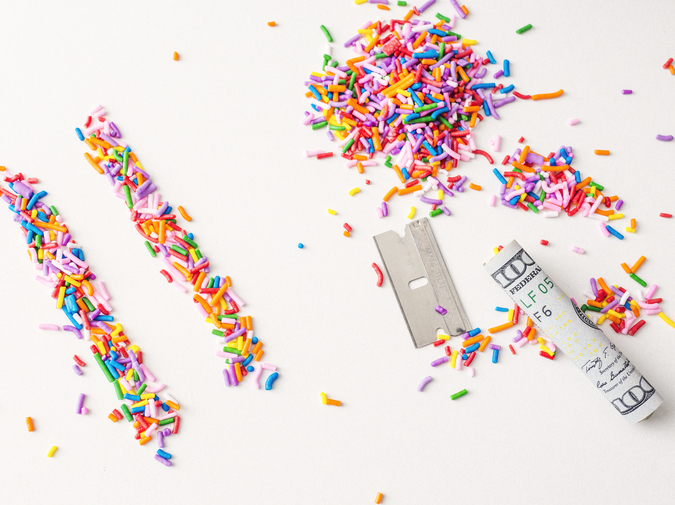 Fifteen years before my autism diagnosis - the year I chopped off all my hair with jagged scissors - I hid a not inconsequential baggie of hash in my dorm room closet. I was, as always, trying to impress a girl. This act could have cost me my private school scholarship. This act had the potential, at the time, to get me deported. I figured Mona was worth it.

Mona was a tall violist, a redhead with long legs and broad apple cheeks. She bought dry ramen from the school bookstore and we wolfed it down in my dorm; we called it a Cancer Party, because Mona said “this shit definitely causes cancer.” Mona, for me, caused everything under the tightly furled leaves of that wonder-crammed September.

That day we pranced into the dining hall together barefoot, grabbing cold lemonade from the fountain machine before we decamped to her dorm.

“Sit down,” she giggled, gesturing at the lower bunk. I sat. Mona pulled a sleeve of matzoh, a butter knife, and a glass jar of natural peanut butter down from a shelf above her desk.

“These are I’m-on-a-diet crackers,” she reviewed, nibbling one. Then she unscrewed the metal lid of the natural peanut butter, gouged at it with the butter knife, and spread it thickly onto her remaining cracker. She took another bite.

“Now they’re lesbian I’m-on-a-diet crackers,” she declared, then brought everything over where we could share it. We settled in there for a while with our matzoh, peanut butter, and lemonade, listening to Fiona Apple in exquisitely anxious chastity; I blushed when our elbows grazed each other.

Then there came a series of  loud, frantic bangs on the door. Mona unfolded her long legs from the bed (grumpily, I thought - or hoped) and did a kind of sashaying dance toward the interloper.

The frenzied knocking was Mona’s friend Beefy, her dark, heavily kohl-rimmed eyes as red as a dust storm on Mars. She barged into Mona’s sparsely decorated room and roved over us with wild, desperate eyes.

“They’re doing sweeps tonight, Mona,” she said in a panic. “You have to help us.” She thrust a Ziploc baggie at her. It was full of a brownish black substance I later learned was hash.

“We’ll take care of it,” said Mona. “Bring me what they have,” then, closing the door and turning back to me with a wan smile, “For fuck’s sake.” She sighed, stretched. “You might have to clear off for a bit. I gotta deal with this.” I nodded, drained my lemonade.

“Here,” said Mona as I was leaving. “Better if we don’t keep it all in the same dorm.” She held out the baggie of hash.

“Uh, yeah, sure, cool,” I stuttered, stuffing it into my pocket.

My dorm was almost exactly next to Mona’s, but I trudged the short strip of campus on high alert. What if the Dean of Students caught me? What if I dropped the baggie and someone found it? I understood Beefy, all of a sudden. Drugs make you paranoid, even if you’ve never taken them.

I buried the baggie of hash in my closet, underneath two suitcases. A safe house. No snitchin’. Unless I blurted it out to someone. Unless. Unless.

Mona called later to tell me, in a kind of code, the night’s haul.

“We have three PIPE cleaners, 4 BOWLS of ramen, 7 JOINT pain rubs, and a magic EIGHTBALL.”

“Oh, cool,” I said, like this sort of thing was de rigeur in my life.

A couple of days later, it was time.

“Thanks, man,” said Beefy as she tucked the baggie inside her white Dior trenchcoat. It seemed like every kid at the school (or every kid whose parents actually paid tuition) had some version of a white Dior trenchcoat. Like a neon sign that said RICH. “I woulda been expelled,” Beefy was saying. “I owe you one, man!” I nodded, my nerves frayed beyond repair. My brief teenage career as a drug mule was over. And the worst part was that Mona just sighed and said,

Everyone, eventually, moved on from sophomore year, trenchcoats and addictive habits and all. Mona started spending all of her free time with Andrew, who had more than enough drugs for some other doe-eyed accomplice to hide.

But to this day, viola music makes my whole body blush.

Sadie McCarney is a queer, neurodivergent writer-performer based on Prince Edward Island, Canada. Her prose has appeared previously in PANK Magazine and McSweeney's Internet Tendency, while her poetry has been published in Best Canadian Poetry, The Gay & Lesbian Review, The Walrus, Grain, The Puritan, and Room, among many other places. Her first poetry collection is Live Ones (University of Regina Press, 2019/ tall-lighthouse uk, 2020); she is also the author of the chapbook-length found poetry performance text/ mental health memoir, Head War (Frog Hollow Press, 2021/ Island Fringe Festival, 2021).