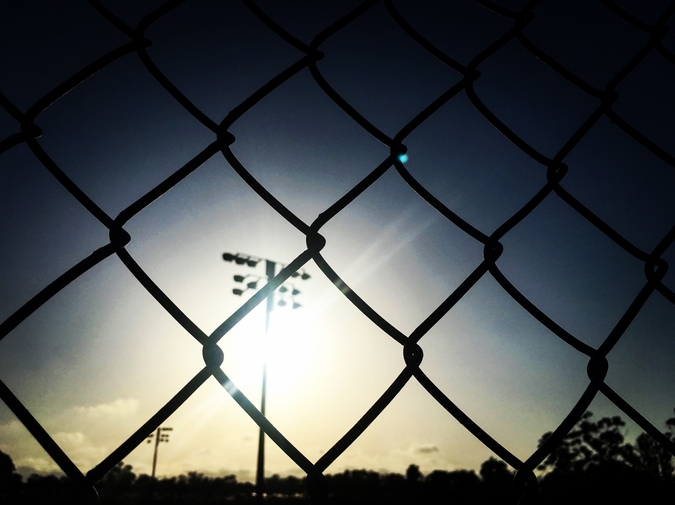 It feels impossible to write about this without starting right there, in the grassy corner behind the away bleachers at the ball field, the late afternoon sun making the trees look magnificent, the Department of Homeland Security agents with their clipboards and arms crossed standing next to the little league head honchos, and me with my hand on my mouth, gasping like a made-for-TV version of a mother.

A bunch of years earlier, my son, Ollie, started playing t-ball at age 4, all cute in his little red and white uniform. The team name was probably the Red Dragons because every kid-voted team name is a Dragon something or other. At this point, it was probably 20 years into my own weirdly-not-fairweather baseball fandom, beginning with early-90s Padres and then easily forgetting about major league ball at all, landing right there, with my kid’s teams.

“Do you know why we’re here?” the Department of Homeland Security agent asked us. The game was still going on. Ollie was up to bat.

A million ridiculous possibilities rolled through my distracted mind. Instead of any of it, I said, “No.”

“Coach B is missing. And is under investigation for possession and distribution of child pornography.”

Ollie’s first team, that gang of red and while-clad littles, was where I realized with certainty: Ollie is unchangingly not gifted at baseball. He is, however, incredibly gifted at teamwork. He is a joy on a team. All the coaches will love him. All the parents will love him. Everyone will want their kids on a team with Ollie with his great attitude, even though he kind of sucks at baseball. And though it was just t-ball and they could barely run in their too-big cleats and their batting helmets that doubled their body weight. I still knew it.

For the most part, I was right. Everyone over the years loved Ollie. But he never really had a great coach. We never had someone who seemed like they had their act together. Each season, we’d watch the other teams, the moms and dads wearing screenprinted t-shirts with the team logo, the kids all well-behaved, well-coached, well-baseballed.

“Who’d you get for a coach?” we’d text each other before the season. Everyone would reply with coach names and how great they were, or maybe how hardline they were and everyone complained about how they’ve already had three practices and ha ha this is gonna kill me, they’d say.

“I haven’t heard from our coach yet,” I’d text back, every season. Every season, we got the lazy one.

And every season, we could tell they just were being patient with Ollie, but that was it. They’d put him in the outfield every inning. They’d smile at his eager, naïve questions (“it’s more of a comment”) at the end of practices. They’d look at me, sitting in a corner of the bleachers reading a book, and probably know not to suggest I practice playing catch with him more. I’d hear the restraint in their voices when he missed a catch, or he struck out, or he threw the ball twenty feet short of the other player. They weren’t saying Come on kid just do better but surely they were thinking it.

“He’s so sweet,” the other moms would say if I ever looked up from my book. “Such a good kid.”

In 2015, Ollie turned 8 at the beginning of the baseball season. And, as was our custom, we didn’t know who our coach was yet. We hadn’t started practicing. We didn’t yet know what variation on “Dragons” the team name would be. We knew the league was one coach short for the number of machine-pitch teams they had, and we knew they were scrounging, begging the dads to sign up. Finally, we got an email. They found someone. At the first practice, we found out he didn’t have kids in the league. His were grown? Maybe I’m remembering that wrong, and he didn’t have kids of his own at all. I hope I’m remembering that wrong. He played baseball in college. He was friends with another coach. I still wish we knew who that other coach was. I mean: I still wish I knew nothing about Coach B.

Like: Coach B was so kind. I wish I didn’t know that. Coach B was great with the kids. I wish I didn’t know that. Coach B was tall, weirdly ageless, and handsome. He seemed slightly flaky but it all just felt like par for the course with us and coach assignments. But I never heard impatience in his voice. Instead of putting Ollie in outfield or just burying him in the at-bat line-up, Coach B would let him spend more time in the batting cage and would just work harder with him. Practices were great. I curled up with my book, free of worrying about a coach about to hurl a sports-joy-ending insult at him. And I allowed myself to believe that Ollie was going to improve. He would get better under Coach B’s watch. Finally, we had a team and a coach that would actually improve his skills rather than it just being something to survive because my kid loved baseball so much.

I don’t remember how many practices we had with Coach B. But I do remember we missed his last practice, where Coach B handed out uniforms. He texted me that he’d just keep Ollie’s at his house until the next practice. And then he disappeared.

“Was Coach B ever alone with your child,” the DHS agent asked.

“No!” I said. Then, “Wait,” I said. I thought about the batting cages, tucked away in a corner of the ball fields. “Maybe.” I looked to the other parents standing nearby, trying to get help, anything. Nothing.

“Ma’am, you need to remember. Did he ever drive your child to practice or to pizza or anything after a game?”

“No,” I said. No. That one I could answer but all I could think about were the batting cages.

Coach B was MIA for over a week before the DHS showed up. Rumors about his mom dying. Inside of that week, the season started and Ollie still didn’t have his uniform because his uniform was in the home of a man newly under investigation by the Department of Homeland Security for possession and distribution of child pornography and illegal trafficking. Maybe the exploitation of immigrant children. Who knows what heinous stuff. And therefore Ollie wore a mismatched, sweat-discolored old uniform from someone’s older brother, the same navy blue as the uniform currently in the home of a man currently under investigation for the one thing you never want to imagine happening, ever. You never want to imagine it happening while your eight year old’s sweet little baseball uniform is in the house. They never asked us if Coach B touched our kids. They never asked us if Coach B ever took pictures of our kids. I thought about all that anyway. I wanted to focus on the real victims, unthinkable crimes against them, but I kept coming back to those batting cages, to that uniform in Coach B’s house.

“The league did everything right,” the DHS agent insisted. There were three of them total. Two men, a woman. Sure, they had guns tucked into thick belts, but they wore polo shirts and therefore looked more like midfield umpires than anything threatening.

“Coach B passed the league background check, because we only just began our investigation. One of our agents found…” he paused, like he was trying to find the words that weren’t as alarming. He failed: “Youth sports equipment among his belongings. We contacted the league immediately.”

They seized the team’s cache of batting helmets from somewhere in Coach B’s house. Some bats. They didn’t mention the clipboard with the roster. Our children’s names. Their birthdays (to make sure everyone is league-age 8!). Their addresses (to make sure everyone is within the league boundaries!). Their names. Their birthdays. Their addresses. I wanted to hold that clipboard in my hands and only then would I believe that Coach B didn’t have it.

We never got Ollie’s jersey back. Thank god.

“We’re just going to tell the kids that Coach B got sick and won’t be their coach anymore,” the league told us.

I thought about our kids pitying Coach B. Our poor beloved Coach, he’s sick, I feel bad for him. I thought about how if they ever saw him at a park, they wouldn’t know to be afraid of him.

The new coach, someone’s dad, ended up being that fabled “best coach we’ve ever had.” All the kids loved their team that season. Ollie caught a few grounders, made a few great plays. He dropped every pop fly. Every time he threw a fielded ball back to the pitcher, it fell short. He hit a few singles. I jumped and shouted from the stands. That’s my BOY, playing baseball mediocrely but playing baseball with pure joy. At the end of season picnic, I choked up, watching the new coach awkwardly tell the kids how great they played, how much they improved, what an inspiring season we had. The coach looked at all of the parents, we all looked at each other. Maybe we never talked about Coach B but we were all thinking about him right then. The kids didn’t give much of a shit, didn’t know to feel complicated. They just jumped up and down, cheered, full of soda and cake, and compared their trophies.

Julia Dixon Evans's novel is forthcoming from Dzanc Books in early 2018. Her work can be found at Paper Darts, Pithead Chapel, The Fanzine, and elsewhere. She works for the San Diego literary non-profit/small press So Say We All. More at juliadixonevans.com, Twitter: @juliadixonevans