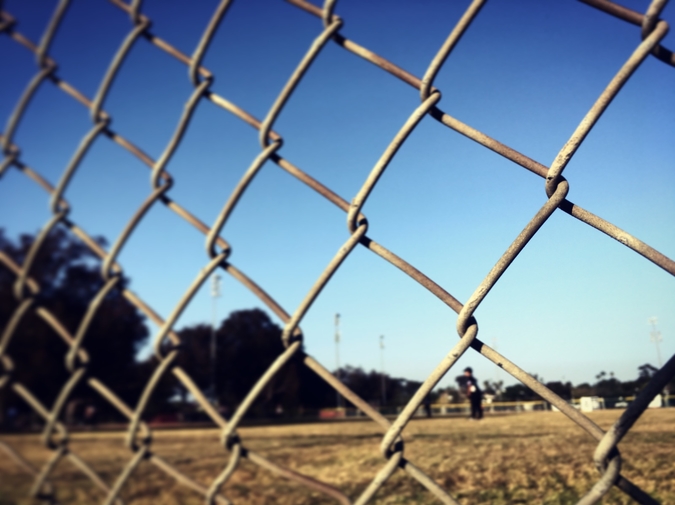 Micah turned pro and the rest of us went regular. Games teed off at ten past four. Sometimes we’d fuck around and wait an extra fifteen, if the rain on Scott was heavy enough to slow the rails downtown, and that’s where our guys pulled up from, or at least the fuckers you wanted on base, since of course the neighborhood’s got idle feet all over but mostly we were too fucked up or too strung out or too in our feelings, or too busy scrapping in the parking lots on Wheeler, or groping each other in the garages downtown, and if you weren’t already there then you were en route with the quickness but for an hour or three on Wednesday nights we were present, clear in the moment. Jacoby manned the upper outfield. Now he’s a mechanic or some shit. The bat was too heavy for Lenny and today he’s a drunk holding court on Westheimer. Kendall threw, caught, and tagged, then he had a son at seventeen, and then he slit his wrists over custody when he divorced like fourteen years later. On the other side of the pitch, Matthew reffed on his hands and knees, before they threw him in juvi, before they threw him in rehab, before they threw him who the fuck knows where. Abel had a sick hit on him—he works at Shell most nights after six—but, back then, on our glass-tattered field, he was almost subpar at best. LaMarcus threw the ball like a murderer, he’d nail you right in your fucking eye, or maybe that one spot in your knee, or else mid-stride, full speed, just square in the balls; but now that motherfucker’s a gardener with this boyfriend out in the Heights. Stefan’s a faggot too, only he’d told us right from the jump. Tommy Lee pulled homeruns from his ass on the regular, but lately he’s been manning this pawnshop with his sister; and the sister, her name was Passion, she actually peeped us from the stands, and we catcalled at her, said give us something to grab at, we dropped our shorts and stuck out our tongues and took the sight of her bugging back home, terrified the whole time, because who knew what she’d do with us; and one day we’d been talking shit on the grass when she grabbed Abel’s bat and knocked a pitch square out the block, right through our hands, she ran those bases like a motherfucker, and now she’s got a kid with some white fuck in Alief. Demetrius Quinto was no good for catching, and no good for hitting, just trash at movement in general, until one day we had him bunting and he couldn’t do that either and now he runs a parlor on the corner of Montrose. Colby could hit, but then he went and he got strung out. Donny hit the pipe. Nelly hit it too. Paco held third base, the only Mexican in the neighborhood, we called him Big Mac since his folks held court at McDonalds like seven days a week, and he was the other guy who made it out, got a free ride to Stanford, and then overseas, to make it back a decade later with a PhD and all the scratch in the world. Jonathan and Jaycee were reliable benchers, and Juicy was the only brother among them who did time. Ivan did time. Connor did time. Bailey and Raymond and Kool-Ray did time. There was one night, just after Lester, and the streets were all the way flooded, and you couldn’t run the bases for shit, let alone wade through the dirt, but, even still, we all knew our steps, it felt primal, like birth, like this shit we just knew how to do, and our toes grazed the asphalt and our legs took us through it, and that night Micah rounded the bases like a dog before he finally got his ankle stuck in a pothole by the fence. Dude fell sideways. Like a block of burnt wood. Screaming like I don’t know what. So Tommy grabbed his fingers, and Criss-Cross grabbed Tommy, and Dawson held Quinto, and Kendall tugged Dawson. John tagged on to Jaycee, and I grabbed Juicy by his hips, and his Nikes wouldn’t budge until Passion grabbed my belt, yanking at my waist, tearing at the seams; and Kool-Aid pulled Passion, and Dawson budged Kool-Aid, and Micah flew out of that hole. You’d think the motherfucker would’ve thanked us, would’ve looked us in the eyes, would’ve at least mumbled something with some semblance of gratitude, but what he did was take off and clear the rest of those bases. Ran through his shoes. His socks. He dove into the mass of us. And we let him do that, we let him take us to the mound. He carried us through the water, and the mud, all the way back home, and that might be why he’s the one playing in Brooklyn and Boston and Pittsburgh and Dallas and Tucson and Cleveland and Oakland, but when you catch him on ESPN, or FOX SPORTS SW, or Telemundo 40, or wherever the fuck, then we’re right there with him, holding him up, pushing him towards wherever we’re headed next.

Bryan Washington is a Texan. His first collection of stories, Lot, is forthcoming from Riverhead Books.