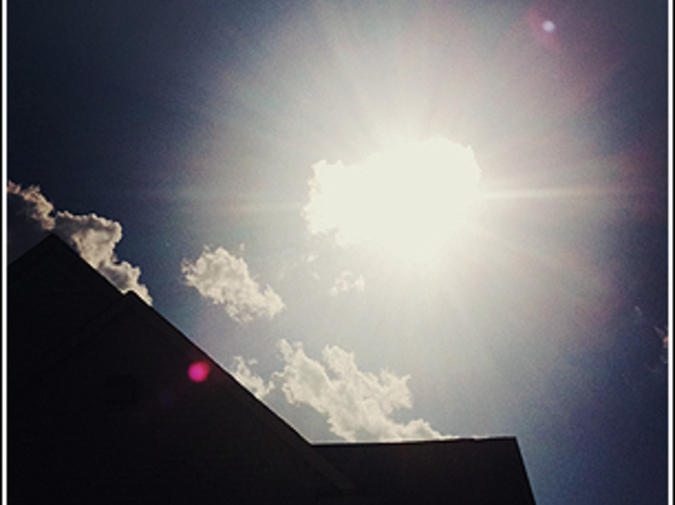 Patterson Thorndike was dead.  What was Dresden supposed to do with that information?  He felt a flush of shame, twice.  First for remembering every time he’d slapped that kid with a towel in the locker room or tripped him in the cafeteria, then for wondering if those were the memories that flashed before Patty McFatty’s eyes as he was falling from the cliff.  Of course not.  Of course he was thinking of his wife or his dog or his parents, whatever people think of when they know they’re about to die.

Patty McFatty wasn’t remotely fat when he died, or geeky.  He had a tattoo of a burning man on his right bicep.  He had a hot wife.  Dresden hadn’t touched his own hot wife in months, choosing instead to look up people from high school on Facebook.  He could barely recognize the thirty-year-old versions of the kids he’d known.  If it weren’t for the mole on Patterson’s cheek, Dresden probably would have dismissed his Facebook page as someone else’s.

Patty McFatty.  How had it happened?  Not only were he and his wife hot, but he seemed genuinely happy.  He had that life-is-great smile in his pictures that you can’t fake, even if you practice in the bathroom mirror every time you take a whiz.

Patterson Thorndike was dead.  He discovered this fact while trapped in the bathroom with his warm-ups around his ankles.  He was hating himself for forgetting his lunch on the kitchen table, hating himself more for eating the cafeteria nachos instead of going hungry, and that’s when he noticed the graffiti in front of his face, his death notice carved carefully into the metal door of the last stall in the locker room.  Someone had taken time and care to scratch the warrant into the beige paint with a blue ballpoint pen, adding a sketched representation of Patterson, with Xs for eyes, a knife in his chest, and a dark pool under his stick figure form.  PATTERSON THORNDIKE IS DEAD.

How long had death been at his elbow?  He couldn’t remember the last time he’d been in this stall.  Who would want him dead?  He searched his memory for transgressions against peers: he hadn’t shoved anyone around, hadn’t stolen someone’s girl, hadn’t been obviously better at anything than anyone.  He was always in the middle—not a scrub or a star—just Patterson Thorndike, average teenage guy who laughs at other people’s jokes, but tries not to say much, so no one can hold anything against him.

Patterson Thorndike was dead.  He looked like he might be sleeping, upright in his recliner, head drooped down with glasses slipped to the tip of his nose, a closed book in his lap, but he was dead.   There was no one around to notice.   Lucky had died on Thanksgiving, when one of Patterson’s grandchildren fed him a piece of turkey.  The cockatoo had choked, and though Patterson tried to rush to his cage, his body would not cooperate, and by the time he’d shuffled over and lifted a shaking hand to the wire latch, Lucky was facedown on a Marmaduke strip.

It was then that Patterson decided to make it to Christmas, then bother with things of the living no more.  His apartment was empty without the sounds of Lucky wishing him a good morning or reciting his own name.  Then he heard Jenny’s voice through the crackling speaker on his answering machine.  She and Bruce had purchased tickets to Disney World to surprise the kids for Christmas.  He was about to lift the receiver when Jenny suggested he go with them, down to Florida, where it would be warm, and they could enjoy the sunshine.  He let his hand drop.  No, he thought, no thank you.  He wouldn’t be one of those seniors tricked by a Florida vacation, left in a home because younger, burdened relations decided that was best.

There were many things he might have liked to do before he died, if he were a younger man.  Trapped in an off balance body that was almost devoid of cartilage, he let dreams of visiting Japan or riding a motorcycle fade into the ether.  All he really needed to do before he died was read one more book.  It didn’t much matter which.  There would be thousands he should have read and hadn’t.  He went to his bookshelf, observed the volumes he hadn’t touched, gifts and impulse buys from when life seemed endless, and waited to select the one that spoke to him.

He pooh-poohed the hardbound classics—Shakespeare, Chaucer, Tolstoy, Dickens—and ran a slow finger across the spines of every interesting book he’d ever purchased or been given.  He stopped atThe Last Novel.

He tugged the book from the shelf, thanked David Markson, and retired to his recliner.

He didn’t think about his dead wife or bird.  He didn’t think about his daughter or her workaholic husband or her vacant, portable-DVD-player-wielding progeny.  He focused on the words in his chosen book, marveling that such a book as The Last Novel might exist, that he had gone his whole life without knowing a book could be a collection of gossip and factoids, J.D. Salinger a staff Sergeant? Plato was sexist? Who was Pietro Aretino who died during a hysterical fit of laughter cum stroke? There was so much he hadn’t known he didn’t know. For a few moments, he considered extending his tenure in the world, finding more odd and delightful books.  But no.  There would never be enough time, and there might never be a moment as blissful as this. He finished the book, kissed the paper cover, then fell asleep with no fear of waking.

Patterson Thorndike wasn’t dead, but he would be.  Diabetes had taken his right foot, just above the ankle, and was threatening his left.  He emptied a bottle of insulin one syringeful at a time, then replaced the medicine with a simple syrup he’d cooked on the stove.  The dummy medicine and syringe went into his bag next to a DNR he’d had notarized.

A horn sounded.  He checked his bag again, adjusted his fedora, and rode out to the waiting taxi.  It’d been hard to find a taxi company that could accommodate his scooter, so after he’d located one, he’d stuck with it for nearly five years.  Matthew took his bag and helped Patterson into the car, “I see you have your lucky hat, Pat.”

“Yes sir, Mr. Matthew, I can’t compete without it.”

“Do you think you’ll win this time?”

Patterson couldn’t say goodbye, so he watched the trees and remembered his best moments, like the first time he tried to eat a hot dog dipped in water, how he’d fought his gag reflex and pushed through, downing 36 dogs in five minutes, placing 13th that day.

His contestant number today was 14, a nice number, a respectable number.  He pinned the 14 to his shirt and greeted the competition.  When the buzzer rang, he gleefully dug into a boysenberry pie face first.

Harmony Neal lives in Illinois with her dog Milkshake, but wishes they lived in Detroit. She’s been published or is forthcoming in places likeGeorgetown Review, The Gettysburg Review, New Letters, Gulf Coast, Alaska Quarterly Review, Fiction Fix, Sou’Wester, Cold Mountain Review, and Prick of the Spindle. Three of her flash fictions are being made into short films in Hollywood. She’s working on a novel set in Detroit.