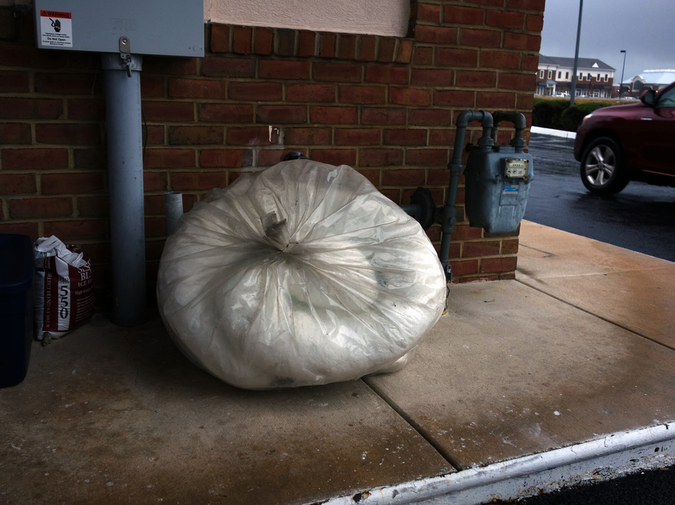 Toby was blind. He was different. We left him alone.

In junior high a few of us became somebodies. Toby and I were no one. We had assigned seats and our last names were next to each other. I had never been able to look at him so close for so long. I stared at him out of the corner of my eye for fifteen minutes and he had no idea. He had a long, thin vein that ran along his cheek—it was almost green—and sometimes in the middle of taking notes it would twitch. I kept track in a running tally on the inside cover of my notebook.

He had worksheets and tests like us, everything in Braille. An old man sat in the back of the room typing up notes for Toby on a machine that looked like a typewriter. We all got used to the old man; he became like a piece of furniture. Toby did his work on a machine of his own. I asked him if I could see one of his papers, and I spent a few minutes running my fingers over the little bumps, which felt totally random to me, not like language at all.

One day in September, Toby asked me if I wanted to come over to watch Jeopardy!. I told him I had never seen it. He laughed. He had braces with bright red bands around the metal bits on his teeth. I was worried that everyone would think I was a loser if I went, but I had no reputation, so I took the bus home with him after school. He lived in the new subdivision that had gone up a few years before, the one where the rich kids lived, with big houses and a pond with a fountain that lit up at night. Better to be blind and rich, I thought. The bus driver dropped us off right at his place. Toby swept his white cane out in front of us as we moved up the driveway.

His mother looked like him—pale, blonde hair, glasses—but her eyes were sad, like a pig’s eyes. She squeezed the life out of my hand when we shook in the foyer, then kissed the top of Toby’s head and led us into a living room with a double-high ceiling and a big-screen TV. The place smelled of fake flowers but there none anywhere I could see. Toby and I sank into an overstuffed leather sofa, then his mother reappeared with a few bowls of good snacks: individually wrapped candies, potato chips—stuff my parents never let me eat.

Toby and I started sitting together at lunch. My parents wanted me to slim down, so my brown paper bag was full of pecans and apple slices and baby carrots. Toby had an insulated pouch that always had something good in it, like a roast beef sandwich and corn chips and string cheese. He ate whatever he wanted and never gained a pound. He shared everything with me, even his can of orange soda.

Toby took small, exact bites of his sandwich. He never had to wipe the corners of his mouth or sweep his place clean of crumbs. When he spoke he never looked at me; he looked towards me and down, like a good listener. Were it not for his wandering eyes he would have been handsome as boys that age are handsome: a thoughtful aspect to his eyebrows, a shape to his jaw and chin.

Before long a girl fell in with us, an outcast named Laura Hewitt. I had known her from a distance for seven years but I never thought of her until now. Laura Hewitt: plain as a saltine. When she started eating lunch with us it was like sitting with a stranger.

Her small, sharp face and big eyes reminded me of a deer. All of her clothes were so old that only a hint of their original color remained. And she spoke in this quiet way, just above a whisper; it was like she did not want to be heard. All the facts I knew about her could fit on one side of an index card: she was an only child, her father was a drunk, she liked to read. At lunch she kept a library book opened as she ate her peanut butter sandwich. Some books were as thick as encyclopedias; others were slim, no more than a hundred pages. Some had French on the left side and English on the right; others were written by men with long Russian names I could not pronounce. All were old, bound in cloth, and they left yellow flakes of dried glue on the tabletop when the bell rang. While Toby told the plot of a sitcom he had listened to the night before, or rambled on aimlessly about a recent dream, Laura’s eyes raced over the page of her book.

She came over to Toby’s to watch Jeopardy! with us. Toby’s mother offered to darn the dime-sized holes moths had eaten in the wool of Laura’s sweater. Eyes down, blushing, she shook her head. When we watched the show, Toby insisted Laura keep a running score on a sheet of loose-leaf with our names at the top. After a few visits, their scores reached the bottom of the page, but I had just a few marks in my column.

Toby and I played silently, not keeping score; Laura sat beside me, reading.

By then—when was it? October?—I had grown insane with lust for her. Underneath her pale, baggy clothes, her body had no shape. When I lay in bed at night, it was not her body that I imagined, but the idea of her. Her indifference, her silence, drove me wild. She could not be possessed, or even understood. The next morning I felt bruised.

Laura lived in a cul-de-sac in a far corner of my subdivision. One afternoon I suggested that we walk home together. Toby’s mother made her uneasy. When she drove us home, she pressed glove compartment granola bars on Laura, eyed her in the rearview mirror. To avoid the interrogation, Laura said yes.

She and I cut through the a field, so the walk was only a mile. The grass was dead. It was like walking on straw. We hardly talked. The field was lined on both sides by the backs of ranch houses. I could see into well lit rooms, but I was too far away to really tell what was going on inside. A dark figure might walk across the kitchen or stand at the window, watching us as we passed by.

For a week we did this. She would leave me at the gate of my backyard fence and continue on down to the end of the row. Then one day I simply asked her inside. It was four o’clock. My parents would not be home from work for another hour and a half.

We sat at the kitchen table drinking unsweetened Cherry Kool-Aid. I made tiny tears along the border of a paper napkin, glancing up whenever she took a small sip. The light was late afternoon yellow, bored of itself.

“Your house is really clean,” she said. She was sitting with her hands in her lap, looking around the room. She was like a nun, but her lips were stained bright red.

She drank deeply from her glass.

I watched her steadily, but she would not look at me. I waited until her glass was empty, then I leaned across the table and kissed her. She parted her lips, accepting me. I kept my eyes opened. Hers stayed shut. Her face was so still it was like she was asleep, but her tongue swirled patiently against mine. The kiss went on and on until saliva built up in my mouth, syrupy and sweet, and finally I had to swallow.

We sat. After a while, it seemed like what had passed between us was only a brief silence.

One day at lunch, when Laura was home sick, Toby told me the story. When he was six years old, he started having headaches. They started as a small, constant pressure behind his eyes. A week passed and the pain got worse. It was like someone was clenching his eyeballs in their fists. His mother took him to a doctor, then a different doctor, and finally the hospital. They kept him there for days. They stuck him with dozens of syringes. They sent him through machine after machine. It turned out to be a benign tumor the size of a grain of rice growing on a fiber of his optic nerve. After a ten hour surgery, he was blind.

I was sitting across from him at the cafeteria table when he told me. The bell had rung for class. Everyone was pushing chairs back, yelling, laughing.

“I can still see a little bit,” he said, “but I can’t tell it’s you sitting there. You look like a shadow.”

Weeks passed. It became routine that, after leaving Toby’s, Laura and I would walk to my house and kiss in the living room with the drapes pulled shut. Our kissing was all that made us like a couple. We did not suddenly begin to have conversations. We did not hold hands or walk down the halls with our arms around each other. Even when we were alone we hardly touched. If a single person found out, everyone would know, including Toby. That was our great fear. Toby was like an innocent child. Poor, sweet Toby. The news would crush him, drive us apart, and leave him with no one.

Laura always kissed me back, but it felt like something I was doing to her. I kissed the lobe of her ear and from the inner pocket behind her jaw down to the pit at the base of her neck, but she never moaned. Her breathing never deepened. I squeezed her small breasts through the thick wool of her sweater. I pawed at the crotch of her corduroys. And she let me, her arms hanging limp at her sides. When it was time for her to go she left through the kitchen door and I watched her from the window above the sink. She hunched her shoulders as she walked away, bent into herself like the world had gone cold.

Danny Lorberbaum is a graduate of Bowdoin College and is currently an MFA student in fiction at Hunter College. His fiction has appeared in Southwest Review.