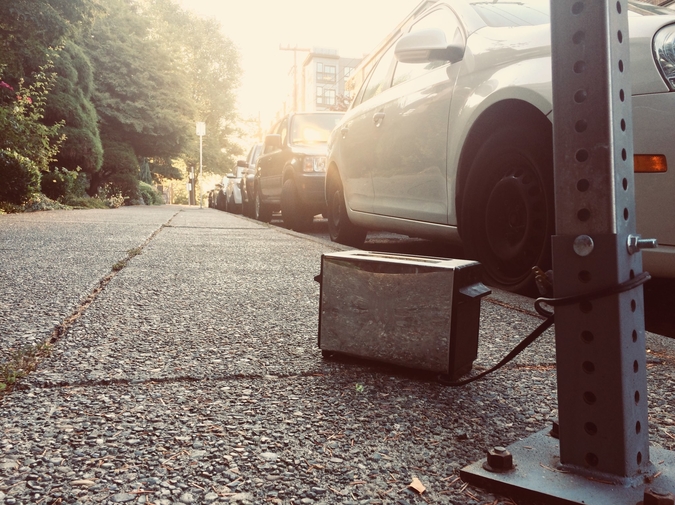 My buddy Ed and I had just left the beach and a guy wearing a dolphin shirt came out of the gas station on the corner swinging handcuffs like he was tricking with a yo-yo. He was taking swigs out of a bottle of Listerine. So he swung his handcuffs and swigged and swigged again and then he stopped cold in his tracks, slammed the bottle down into the concrete, and started talking all this shit about how the world is flat. That’s when we noticed the cop. He was getting up off the ground near the entrance, dusting himself and wiping blood from his lips, yelling, “You stupid motherfucker, I’ll shoot you.” The dolphin shirt guy’s eyes got real wide and he came running towards us, jumped right into the backseat of my car and said, “Let’s roll.” And that’s exactly what we did. We peeled ass out of there, drove recklessly through the side streets, not even talking, just in a blind panic, and that’s how we all ended up back at my place, sweating and anxious.

His name was Charlie and he said he’d been dodging cops all day. I offered him some water. He declined and requested something hot, so I put on some coffee.

“Don’t know. I think it’s because they know my thoughts. They don’t like what they see,” he said.

Ed was cool as a frozen-ass cucumber. He just sat at the table reading the paper while his burrito cooked in the microwave. I wasn’t so cool, though. I was pacing and asking questions and stuttering and tripping over myself. Finally, I found my weed and it made my heart tick a bit slower, a small laughter in my veins, but I was still a bit wigged out by the whole thing.

I looked at Ed.

“Seriously,” I said. “What the fuck was I thinking? We don’t even know him.”

Charlie laughed. “Charles Baker,” he said, “straight out of Kansas City, Missouri. Been here ten years and change. I punched that pig back there for harassing a kid buying a Snickers bar. Don’t get me wrong, I’m plenty drunk, but that fucker had it coming either way you look at it—the smug fuck.”

“I thought you said he didn’t like what he saw inside your head,” I said.

“That too, that too, but that fucker had it coming.”

Ed chewed his burrito slowly, talked through his food. “I like you. Here, have a seat, man. Pigs are always up to some shit, aren’t they?”

“You got that right,” said Charlie, sitting down. “One of them stole my son and put a computer chip in his butt—and he comes back home after a year or two and doesn’t even know who the fuck I am.”

I was still feeling pretty weird about everything, but eased up soon enough, especially when Charlie got to talking about how the world is flat again. I knew it was stupid. Something about it, though, just closed off all the nerve points and made me numb. And after an hour or two, I really started to like him.

We played checkers and smoked weed while watching Jeopardy. And that Charlie, he was smart as a whip. One question was about a book by some guy named Boccacio. “What is the Decameron?” said Charlie. And the girl on the screen said the wrong thing, and old Alex Trebek said, “Oh, I’m sorry, Gina, the right answer is the Decameron. The Decameron.” Ed and I just looked back and forth at each other unbelieving. Whole game went on like that.

During a commercial break Charlie asked if he could use the phone, so I threw him my cell. He dialed and let it ring and got no answer, tried again. Maybe it was a different number, I don’t know, but this time somebody answered, and he said, “You got some? Yeah, okay. Well, long story. I guess you could probably just come over here. I got some new friends. Yeah, yeah, they’re cool as fuck. Hey, hold on. Hold on.” He motioned for me to come over. “Hey, could you talk to her? My friend Vicki, she needs directions.”

I don’t know why, but I gave her directions.

I found her voice annoying, but was intrigued, and I thought maybe we could make it into a party, just the four of us.

She was there within the hour and we still had another episode of Jeopardy to go. But before she joined us, she opened her bag and pulled out a box of Cheerios, a compass, and a little baggy of meth, which Charlie proceeded to smoke out of what appeared to be a lightbulb.

“What’s the compass for?” I asked.

“Getting around.” She said.

Vicki beat Charlie by one question. He took it well. Ed and I lost by a ton so we decided to start in on the booze, get some music playing, and see how fast we could kill our loss-bummer and start smiling again.

We all did our best at taking in the chemicals around us quickly and then we sat around waxing philosophic. Charlie talked on and on about the great literature of the world. And Vicki kept going about the flatness of the earth.

“Bullshit the earth’s flat,” said Ed. “Where the fuck you people come up with this shit?”

“Well,” she said. “Don’t you see? The oceans and rivers would fall off into space if the world was round.”

“Fuck no—it’s called gravity,” he said. “The fact that rivers flow and waves exist are fact enough it’s a globe.”

“Okay,” said Ed. “Explain this. If the world is flat, how come nobody has ever taken a picture of the edge?”

“Because it’s far too big, no one could possibly make that journey.”

A few hours later, she cornered me in the bathroom while I was peeing, and said, “I’ll show you my edge.”

I said, “What about Charlie?”

“He’s my brother,” she said, but I knew she was lying.

We went at it for a bit, right there in the bathroom, then she left, just shy of a few strokes in, because I was feeling a little woozy and she wanted to give me some space. But I’m telling you, it felt like real love somehow—something about the way she worked her mind and body.

When I woke up the sun was spiking me in the face with footballs. Ed was tied up in the kitchen. Charlie and Vicki were gone. Nothing seemed amiss until I untied Ed and said, “Fuck, what a night. Let’s go surf.”

But when we got out into the garage, we saw that those motherfuckers had stolen our surfboards right off the roof of my car and left all their bullshit behind. For instance, her teeth marks are still on my collarbone. That was weeks ago. She’s already moved on, a new life in another land. I hope she comes back for her box of cereal, her compass, and her stupid denial that the world is somehow beautifully round and spinning, but I’m not holding my breath. Still, think of it, I could have promised her a future with braces and a glow-in-the-dark retainer so her teeth would never ever shift again. I could have given her walks to the beach on Sunday mornings with our make-believe child. I could have taken her to that impossible edge and pushed her off. Next time, if there ever is, I think I’ll loop a rope around her long front tooth and tether her to earth. She wouldn’t need a compass. She wouldn’t need anything. Charlie wouldn’t have to exist. Neither would I. She could have it all.

Troy James Weaver works in floral in Wichita, Kansas. His novel, Temporal, is out now from Disorder Press.