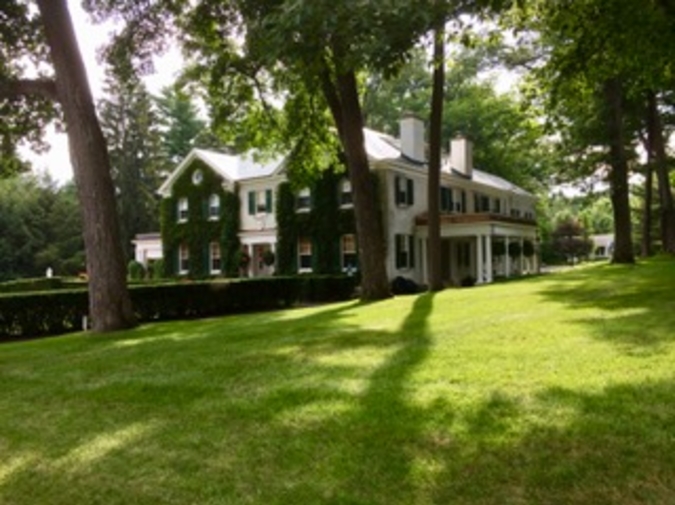 Since they had moved to Orangeville, Trudy found she could no longer distinguish Kevin from other men. Or rather, she could no longer distinguish him from other middle-aged men of roughly the same height and build. The clothes mattered too, of course. It was the style of the man that made all the difference, the type of man. That was the problem. Kevin was a set of abstracted properties: salt and pepper hair; long-limbed angularity; neatly pressed shirts; khaki-tan-olive pants; sensibly attractive shoes; glasses just expensive enough to seem a little smug. Trudy would see other men with similar qualities in supermarket aisles stocked with organic things, at wine stores, and at coffee shops. Although, to be fair it was not just appearances that confused Trudy.  There were a few men at work, two or three, maybe four, that like Kevin were always making polite suggestions about correct pronunciation, always trying to keep the discussion on track, always pulling their eyebrows together when they listened to you talk so you would know they were paying attention.

The first few times it happened--that is, the first few times she was startled to find Kevin in a place he wasn’t supposed to be, and then further startled to realize it wasn’t Kevin at all, but one of his doppelgangers--she felt some distress. Palpitations and perspiration and so on. But the misidentifications began occurring with such frequency that they soon ceased bothering her altogether. As Kevin made friends in Orangeville, the doppelgangers began to appear at home as well as in public. She would walk into the house in late afternoon to find a couple of them chatting in the kitchen, having a hoppy beer together on the verandah, playing bluegrass in the garage. They flitted in and out of her life like schools of fish. Whenever she encountered such a group she made sure her smile was capacious enough to include them all, her glance sweeping enough that it didn’t really matter who it fell on.

The kids didn’t seem to notice Kevin proliferating. Although to be fair, aside from outrage at the occasional domestic injustice, they didn’t seem to notice much at all. Trudy was convinced they were unaware they had been moved across the entire country and were attending a new school. They carried on as they always had, interacting with her and Kevin in their usual confident manner. She admired the glow of their skin, their white teeth, their shining eyes, and their prodigious appetites, but they had become increasingly uninteresting to her as they grew older. She loved them, certainly, and worried about them, but not with the same white-hot intensity as she had when they were small. Since they were born, she had seen them murdered by her imagination a thousand times in a thousand ways and it had worn her down. For years she panicked when she could not see them, when she lost track of their bodies. But by Orangeville she had reached the point where so long as she was confident they were physically safe and reasonably happy, she could just as easily do without them. She no longer needed to feel their warmth, to see the rise and fall of their chests. The knowledge, or at least the conviction, that they persisted without her was enough to keep her content.

None of the other wives seemed to realize what had happened to their husbands. Her colleague, Lucinda, was married to one of Kevin’s doppelgangers, and they came over frequently with their child, who was the age of Kevin and Trudy’s youngest. The kids would go upstairs or into the basement and do together whatever it was that children did in those places. The men fussed over the barbeque and the women sat in the kitchen and talked over wine.

On one of these evenings Lucinda complained about the custodian responsible for their floor at work.

“He stares at the girls,” she said, “At the young women.”

“He most certainly does,” she leaned forward. “And I think he masturbates in his office.”

“Yes, down the hall between the bathrooms.”

“I thought that was just a closet where he kept supplies.”

Outside the two men bent their heads over the brisket.

Lucinda continued after a reasonable pause: “He has an office and I think he masturbates in there.”

“He’s always closing the door. It should be open. We shouldn’t have to knock like it was some kind of private apartment.”

“No. We shouldn’t. Last Friday someone spilled coffee all over the faculty lounge carpet, and I had just seen him in the hall staring at the girls’ chests, so I marched over to get him, and he had already snuck off to his office and closed the door. I stood there knocking for ages before he finally opened up, all flushed and sweaty with his shirt untucked.”

“It was a hot day. And Admin refuses to turn on the air conditioning.”

“It smelled of stale semen.”

A few weeks later, Trudy and Lucinda were sitting on the bleachers at the community center watching their kids play soccer. It was the first game of the year and the children were rushing about in unruly packs, chasing the ball up and down the field. A young woman was sitting in front of them with an infant. The child stared at Trudy over its mother’s shoulder, blue eyes slightly crossed, fat chin glazed with drool. She was unsure if the child could make out her face from that distance, or recognize it at as a face if it could. When her own children were that age she was convinced they were indifferent sociopaths, that the particular arrangement of her features meant nothing to them. Any conglomeration of eyes, nose and smile would have done for them, so long as they were getting fed.

“Who?” Trudy looked around.

“There,” Lucinda pointed with her nose, “across the field, by the parking lot.”

A man was standing by a pickup truck watching the game. Blue jeans, t-shirt, and a faded ball cap. He was about fifty.

“It most certainly is.”

“He’s got grandkids,” Trudy said. “One of his grandkids must be playing.”

“No,” Lucinda laughed. “To human resources, about how he stares at the girls, and the closed door, and the other thing.”

“Oh,” said Trudy, and Lucinda jumped up and cheered. The kids were milling about in front of a goal. The ones wearing blue were in a sort of clutch, grinning and exchanging high fives; the reds were scattered about, looking at the ground, re-tying their shoes. The referee retrieved the ball from the net.

The young woman looked back at Trudy and smiled.

The baby stared at her.

It was dark and Kevin was snoring. When Trudy was certain she wasn’t going to get back to sleep she went to the study. She arranged the stack of ungraded papers on the desk in alphabetical order, pulled a book from the shelf at random, flipped through it, and put it back. She listened to the frogs pulsate in the backyard. She could not find a name for how she felt: not bored, not depressed, not melancholy, not dissatisfied. Perhaps there was no name for it. She went to the kitchen. Someone had left the milk out. She returned it to the fridge. The clock on the microwave said 4:53. The alarm would go off at six. She slipped Kevin’s jogging shoes on and grabbed his bomber jacket. A bandolier of condoms fell out of the pocket, and she picked it up. One of the packets had been ripped open. The silver interior was still slick with lubricant. Trudy touched it and smelled the latex on her fingers.  She imagined all the doppelgangers flopping about together on sandbars and graveled beaches, naked and exhausted, staring sightlessly at the sky. She returned the condoms to the pocket and pulled the jacket tight around her.

She went out to the front porch. It was just brightening and the birds had begun to sing. She sat with one leg crossed over the other, untied shoelaces dangling past her bare ankle. The frogs were ratcheting up the noise. Soon the sun would be creeping above the rooftops. Soon Kevin would wake up--and the kids. They would have their showers and their breakfasts and go off to school or to work or wherever it was they spent their days. So would she. She thought about Kevin and the men he resembled, she thought about how interchangeable they were, and the children in their strollers and school buses and playing on the fields. She thought about how easily they could be exchanged for one another. She tried to remember something to be nostalgic about, something interesting that had happened to her once, but she couldn’t.

William Squirrell is a Canadian living in western Pennsylvania. His work has appeared in Monkeybicycle, Sundog Lit, decomP magazinE, and other publications.He is also the editor of Big Echo: Critical SF at www.bigecho.org. More information can be found at www.blindsquirrell.com and on twitter @billsquirrell.